Wherever I Look
Recaps, Reviews, and So Much More
Home TV Series SweetBitter: Season 1 – Recap/ Review (with Spoilers)
TV Series

SweetBitter is really just an appetizer, a sample platter, that you’ll likely find enticing enough to ask for more.

Table of Contents show
1 Summary
1.1 Question(s) Left Unanswered
2 Highlights
2.1 Ella Purnell as Tess
2.2 Daniyar as Sasha
2.3 Caitlin FitzGerald
3 Low Points
3.1 Jake & Will
4 On The Fence
4.1 It’s Only 6 Episodes
5 Overall: Mixed (Stick Around)
5.1 Has Another Season Been Confirmed?: Not Yet
6 Follow Wherever I Look on Twitter, Like us on Facebook and Subscribe to the YouTube Channel.
6.1 Check Out Other TV Recaps
6.1.1 Such as These Similar Shows
6.2 The Bold Type
6.3 Mozart In The Jungle
7 Episode List

It’s 2006 and 22 year old Tess, from Dayton, Ohio, decides to escape the monotony of her single father household for a new life in New York. One in which she gets a roommate, Jessie, who we never meet, sells her car and finds a job at a fancy restaurant. Not because she wants to be a chef or anything like that. More so, like many of Howard’s staff, she doesn’t necessarily have a direction for her life quite yet.

Luckily, the community, which is Howard’s staff, provides some solace in not knowing what they necessarily want to be yet. Take Will, who is Tess’ trainer. At one time he was going to film school but now he works at the restaurant and seemingly tries to date the new girl – which ends up never lasting. But, at least each one gets the best oral sex they’ve experienced in their life. There is also Sasha, a highly flamboyant Russian man who is deeply unhappy. Though, as I note how unhappy he is, technically that spreads across the board.

Howard is a widow so he is unhappy and lonely; Ari, a server I believe, is unhappy since she keeps falling for girls who are unavailable, like Tess who is straight and narrow; Heather has a fancy degree but seemingly can’t get a job which goes with it and then there is Jake and Simone. Jake is written to be a tortured soul, in the ilk of a romance novel or YA novel and Simone, the Queen Bee who is oh so friendly until you become a threat.

This is what Tess finds herself surrounded by for the few weeks the show covers. 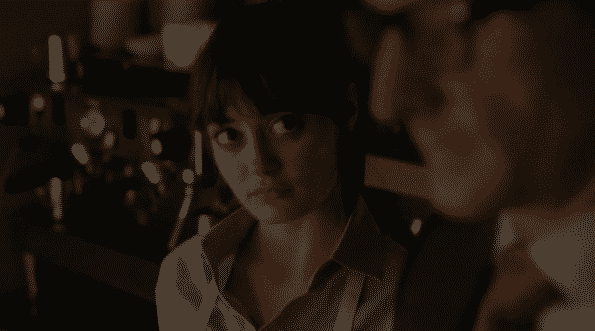 While Tess’ living situation raising an eyebrow, since Jessie’s absence, how Tess found him, and so much more seems like it demands an explanation, you’ll easily let that go. If only because Purnell uses those big, doll-like, eyes of her in such a way that you forget that one bump. For a lot of actresses with doe eyes don’t necessarily get to play them up. There is either a focus on them playing sexy, the cool chick, or the one who is tough so the eyes go to waste. If not, in the case of one actress, the eyes make them look dead inside.

With Purnell though, through multiple scenes which just show Tess taking things in, you get the childlike innocence big eyes can have. The feeling that everything is so new and vivid, to the point it is borderline overwhelming. Which makes it so everything we see Tess go through, even when it comes to the crazy scenes she shares with Sasha, they only seem as crazy as they are because you are connected to her. Meaning, you get that feeling of her being an average girl from the midwest who is having a full-blown New York experience. One which you’d think would only exist in books, movies, and on the TV. “‘Hope’ is the ugliest word”

The comical and flamboyant Sasha is probably one of the most interesting characters who, seemingly are on the LGBT spectrum, I’ve seen in a while. For there is something so wonderful, yet tragic about him. Take him seemingly coming to the US and being used to help women get green cards. If not mutually him being used for that and him taking money because New York is expensive.

Well, expensive and lonely. Which, at times, brings on slight Pose vibes. Well, if Pose was focused on white members of the LGBT community anywhere. Because there really does seem to be layers to Sasha that we got a taste of, but really didn’t get as deep into as we would have if this show had a regular full season. That is, as opposed to a mini-series episode order. After Masters of Sex, I really didn’t expect to see Caitlin Fitzgerald again. Not because I didn’t think she was talented, but she did seem like the type who’d, unfortunately, end up in a lot of odd roles, moves we never heard of, until she is decades in and someone rediscovers her and makes her big. Luckily, this show may present a case for why Fitzgerald isn’t to be slept on. For, as Simone, she shows layers in a way even Tess doesn’t get to do.

To start off, there is this Queen Bee persona that comes from being able to influence Howard and seem like she has an ownership stake in the restaurant but hates doing office work. Alongside that, there is this maternal quality you have to enjoy. In terms of her relationship with Will, it is the mother of the problem child who she wants close yet also is aware they scratch and bite.

But then there is her relationship with Tess. Taking note Tess mother isn’t around, watching episode 4 when Tess visited Simone’s, was an experience. Since, as noted, Tess lets you into her head easily so getting some type of maternal figure in her life you feel the calmness this gives her. This validity in, not her femininity or anything like that, but that she is deserving of that type of love – if that makes sense.

One scene in particular, while Tess is in the tub and Simone just touches her face gently, you can imagine crying. Just because it was such a “I see you” moment. Yet, as shown in episode 6, when Simone loses that influence and power, or rather it is threatened, she can go from fairy godmother to Disney stepmom or witch. Making you wonder, if this show gets a second season, which will she let out more?

Love interests are so hard to write when they are written to be people seen with rose colored glasses. If not to make our lead seem like an ass. Which is the problem with Jake and Will. When it comes to Will, he represents what Tess left in Ohio. A nice guy who seems like a right choice, but doesn’t necessarily inspire any real sort of passion. He is just your average guy who knows how to talk to girls and eat out well.

Then with Jake, he is this bad boy type who doesn’t have much besides his reputation. He never says anything interesting and in terms of doing interesting things? He fails in that area as well. Pretty much, Tess’ daydreams and people’s warnings about Jake are the sole reason he is even the slightest bit noteworthy for the writing of the character and how he is performed? It brings nothing to the table.

For most shows, it is between episode 4 to 6 when it becomes clear whether the program will be good or not. Especially if the first few episodes are iffy and are laying the foundation for the series. So for the show to end on episode 6, just when Tess gets hired, it’s kind of jarring. Particularly because it isn’t clear if there will be a season two and whether it may have a regular 10 – 12 season order or not. 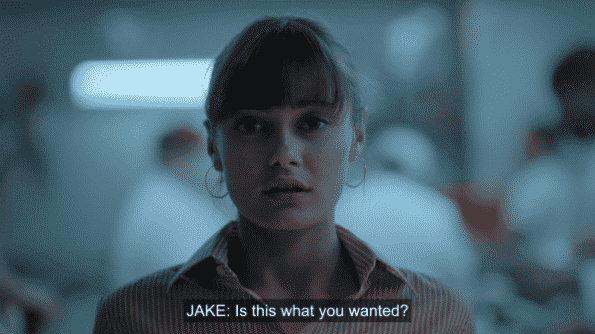 Jake: Is this what you wanted?

The issue at hand for SweetBitter is just as it lays down its foundation it ends. Giving you a, “That’s it?” kind of feeling. For the show barely feels like it was getting started. We are just getting to know the characters past a superficial level and while the season ending things with Tess being hired is appropriate, to wait maybe a year or 9 months for season 2 is ridiculous.

Why? Well, in that lies why this show is labeled mixed. It’s mostly because, while likable characters and performances exist on this show, it isn’t the type of show where they are so noteworthy that they can maintain a long-lasting effect. You are not going to remember a fourth of these characters or what happened in the amount of time it takes for a new season to come out. Also, this is the type of show which, if there was a time conflict, more than likely you’d check out this new show, or another you like, and catch this on demand.

With saying all that, SweetBitter is worth seeing as long as you keep in mind it has what feels like an abrupt end.

Has Another Season Been Confirmed?: Not Yet

Such as These Similar Shows

Three young women, one from the midwest, another from a poor single mother household, and one who came up in wealth, work at a progressive, feminist magazine named Scarlet. The show focuses on the wealthy one, Kat, exploring her sexuality as well as her formidable abilities as social media director; the single mother household raised Sutton, who is trying to become a stylist, while dealing with the fact she doesn’t have the safety net her friends have; and Jane, the girl from the midwest, she wants to be a serious journalist. The problem is though, she wants to be challenged but challenged in a way which suits her ethical leanings and ideas.

Together, they pursue being bold, taking risk, and finding what it means to have life, liberty, and pursue their own brand of happiness.

Mozart In The Jungle

Though only the pilot was covered for the website, Hailey and her peers have become something watched, just for personal enjoyment, since the pilot’s release. For her finding herself in New York and aiming to work in one of its most prestigious symphony orchestras makes for quite a journey. Especially since she is your usual person who moved to New York to live the dream and got smacked with reality.

However, as the seasons go on, she realizes the dream she came with has a bit more flexibility than she realized. Leading her, under the tutelage of the eccentric Rodrigo, to explore other ways she can express herself through classical music and make a name for herself.