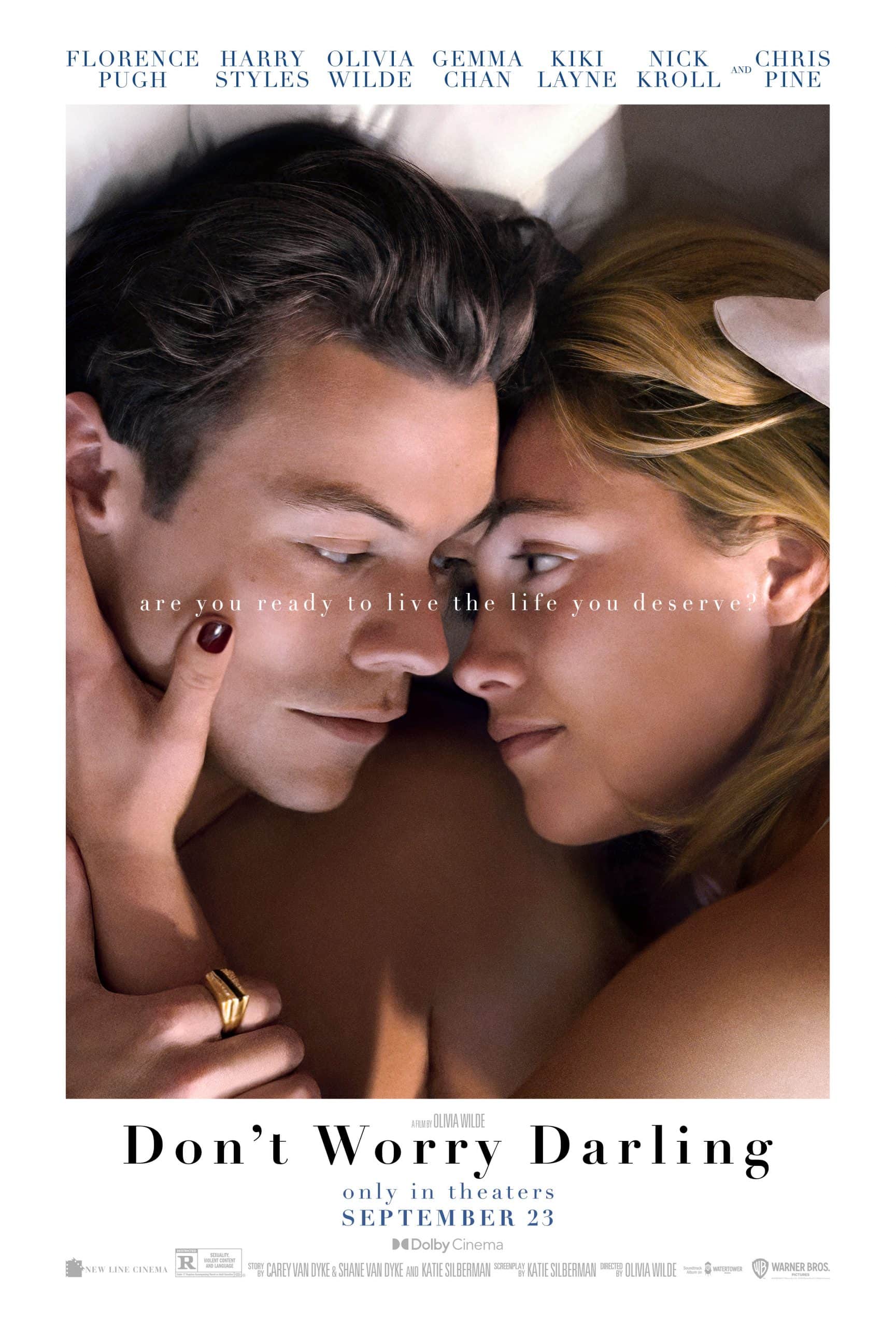 “Don’t Worry Darling” solidifies Olivia Wilde’s name as someone who can be trusted when they’re noted as the director.

Two men, Frank and Dr. Collins, have created what appears to be the perfect little paradise town called “Victory.” There, in this 1950’s-esque world, men go off to work, women take care of the home, and everyone appears to be happy. At one time, Alice and Jack were, too, as noted by Alice’s neighbor Bunny, who would hear how joyous the two felt in each other’s company.

However, there comes a moment when one of Alice’s friends presents the idea everything isn’t what it seems. This, originally, is ignored, but as Alice asks questions and is gaslit everywhere she turns, so comes the dissolving of the perfect suburb and Frank finding a need to reassert his influence and authority.

Frank is one-half of the creators of Victory and is beloved in the community to the point of seeming like a cult leader.

While Frank isn’t shy about Dr. Collin’s role in creating Victory, Dr. Collins isn’t as fond of public adoration and grandeur speeches or parties. He’d rather be the local physician, often treating the wives struggling mentally than showboating.

At this point, Alice has lived in Victory a while and has found it comfortable. She has a best friend in Bunny, who she can gossip with, she goes to dance classes to stay fit, takes the trolley around when she needs fresh air and is so in love with Jack that everyone can usually hear it.

A fast-rising employee of Frank’s organization, Jack has it made. His wife presents him with consistent comfort, he has a good group of friends, and there is really nothing he ever has to ask for.

Bunny is Alice’s neighbor, best friend, and mother of two, who always has either a drink or cigarette in hand.

Shelley is Frank’s wife who is a staunch supporter of his, and even if she didn’t create Victory, her advocacy of him and the vision of what Victory is and could be, makes her a notable asset.

You Never Get Bored

Psychological thrillers, like horror movies, require a careful touch. There is a need to have a proper build to instill fear, but never forget you need the right lead, ensemble, and story to keep people interested beyond the thrill of feeling in danger while completely safe. “Don’t Worry Darling” has that.

But, it is in you being sold the same perfection Alice is that draws you in and the skepticism of this perfect suburban life in the middle of the desert. One in which Frank seemingly is the head of a cult, with his voice played on the radio during the day to seemingly indoctrinate the women as the men salivate at the chance to impress Frank and gain favor. Watching that leads you to latch onto Alice, for a part of you wants to see holes poked, strings pulled from the sweater, and Frank’s world unravel so you can see what it truly is.

And let me say, “Don’t Worry Darling” delivers. Once the twist is revealed, it is satisfying in ways that trump all the drama surrounding the film that has nothing to do with its story. In fact, while you have to credit writers Katie Silberman and Carey and Shane Van Dyke, who are related to the legendary Dick Van Dyke, Wilde’s vision is also worth noting. For as much as the twist is notable, so is the way music is implemented throughout, which keeps the film’s pace and tone going, even if Alice is only on a slow decline. Also, the jumps between confusing moments and reality, it creates a wonderful build towards you getting answers, and honestly, that is perhaps the thing we love the most about the twist: it doesn’t come out of nowhere, yet it isn’t any less satisfying. You feel respected as a viewer and okay with the amount of answers given, even with many questions left to ask.

Wishing More Was Done With The Supporting Characters

While Frank, Jack, and Alice are fleshed out well enough for you to get into who they are and what they are capable of, unfortunately, most of the cast are restricted to a single purpose. Bunny, for example, is the town gossip, and while the twist reveals more to her story, it doesn’t unpack certain lingering questions. The same goes for the rest of Alice’s friend group and neighbors. Many seem to be there to fill the scene and neighborhood, to fulfill the types you’d expect in a community like this. But when it is time to truly differentiate and become prolific, no one, not even Nick Kroll’s character, finds a way to stand out.

It’s all a simulation. Jack, in real life, isn’t as suave and beautiful as the Harry Styles many love. He has a scraggly beard, an attitude that makes him seem like an incel unsatisfied with just having a wife but wanting one to wait on him. Mind you, he is unemployed, and she is a medical doctor working 30-hour shifts to keep them from being homeless.

But, with feeling emasculated comes Jack finding Frank’s cult, being indoctrinated by him, and deciding to use what money he has access to in order to put Alice in some sort of “Clockwork Orange” situation where her eyes are forced upon, continually hit with some sort of scan or laser to maintain a trance. One that she and at least 30+ other women are in.

However, Alice isn’t cooperating with the machine and the spell it is supposed to keep her under. Something about her brain, maybe the red flags raised within Victory, or Frank and Jack gaslighting her, makes it hard for her to accept what is. Hence, Dr. Collins had to do shock therapy to try to wipe her memory and make her more compliant. But with the memory aid of a song, Alice wakes up again, and while Jack confesses to what he did, there is no forgiveness. He stole her life because he couldn’t handle not being the breadwinner, the old school perception of a man, and now he disgusts her.

This leads to him trying to grip her tight, maybe even hurt her so she can go through shock therapy again, but Alice kills him. Bunny is the first to discover this, and this leads to her confessing that, unlike the other women, she knows the truth about Victory. She signed up since she lost her kids in the real world, but in Victory, she still has them. But with knowing Jack isn’t just dead in Victory, but in the real world as well, she tells Alice to run, which she does, as all the men freak out. What doesn’t help is the bulbs in their wives’ heads going off, symbolized by actual lamp posts outside their homes exploding.

As that happens, Alice is on the run to headquarters, where the men would go every day to leave and make money to keep their wives under Dr. Collins and Frank’s spell. But, in the end, Alice succeeds, Dr. Collins dies in a car accident while trying to stop Alice, and Frank is killed by his wife, a wild card. Mainly since it isn’t clear if him losing control meant she woke up and decided to kill him for what he did to her, or if his failure made her mad because this was something she felt she had ownership over, and he didn’t do his job to maintain it. It’s hard to say which is the truth, but the film ends implying Alice escaped Victory and is back in the real world.

However, how does she handle killing Jack and Frank’s people now coming after her in real life? That is something a sequel could explore.

As just noted, the film doesn’t end on a cliffhanger, but a few plot strings are lingering. What will the women do once they realize what the men did to them? Frank’s wife, Shelley, may have played a conscious role in Victory and may want revenge on Alice for destroying what she worked for, and there is the question of whether she can succeed? Add in, when men die in Victory, they die in real life, which means Shelley and Alice have blood on their hands, and getting to see what comes of that could make for an interesting movie, albeit shorter than the original.

Don’t Worry Darling (2022) – Review/ Summary (with Spoilers)
Overall
“Don’t Worry Darling” delivers what is expected from a promising trailer. A film that only gave you a tease for free, and what you paid for? It is more than you could fathom and leaves you satisfied and happy you went to the theater.
Highlights
The Twist
You Never Get Bored
Disputable
Wishing More Was Done With The Supporting Characters
85
Subscribe to our mailing list Follow Wherever I Look on Twitter and Instagram, Like us on Facebook, and Subscribe to the YouTube Channel.