Wherever I Look
Recaps, Reviews, and So Much More
Home TV Series 9-1-1: Season 1 – Recap/ Review (with Spoilers)
TV Series

9-1-1 starts off strong but loses its luster as you get used to the sometimes outlandish 911 calls and the drama of the cast seems to lose its importance.

(Read in CSI voice) In the streets of LA – paramedics, cops, and firefighters work together to save lives. This show gives you the story of a handful of individuals, Athena, Henrietta, Bobby, Buck, Chimney, and 911 operators Abby and their lives on and off the job. (You can stop reading in a CSI voice) It includes Athena dealing with her husband Michael coming out and quickly finding himself a young boyfriend, while dealing with his daughter being bullied to the point of suicide. Hen finds her ex-con former girlfriend coming back into her life, and bringing familiar drama and Chimney? Well, he gets a pole through the head.

But the characters who get the most attention are Bobby, Buck, and Abby. Bobby, a former alcoholic, he is trying to pay for the mistake which caused his life to implode and through saving others, he plans to hold up a deal he made with God long ago. As for Buck? Former playboy, turned to how Abby got her groove back, just wants love and Abby seems the right place to find that. However, Abby is in a weird place right now. With a mother suffering from a degenerative disease, and not actively having a life because of it, you are left to wonder if she can be serious about Buck or not? Especially if, like Athena, she is just trying to have some fun and remember what life was like when it wasn’t routine and obligations.

Despite each character having some kind of drama, from Athena’s husband and daughter, May, to Hen’s marital problems, Chimney’s accident, and etc, only Bobby’s story seemed to have been properly crafted. There isn’t this vibe of it being about shock value or soap opera dramatics, they want to show a full arc of someone trying to redeem himself for not just what he did, but also in the eyes of God.

Which also was an interesting aspect of his storyline since religion is rarely the core of a character’s story. It is something they believe in, maybe show in having a cross, but we don’t see them consistently go to church for guidance, peace of mind, or to speak with a spiritual leader. Yet, something also interesting was showing that sometimes that won’t work.

To put it simply, Bobby’s storyline, similar to Abby’s, felt out of place. But while Abby’s felt out of place for a bad reason, Bobby’s was in a good way. If only because it was dark and lacked sassy lines or light-hearted jokes to veer it away from coming off too serious. No. Instead, they let you sit and wallow in this man’s pain and gave you a chance to understand and explore it. Thus making everyone else’s issues look shallow in comparison. 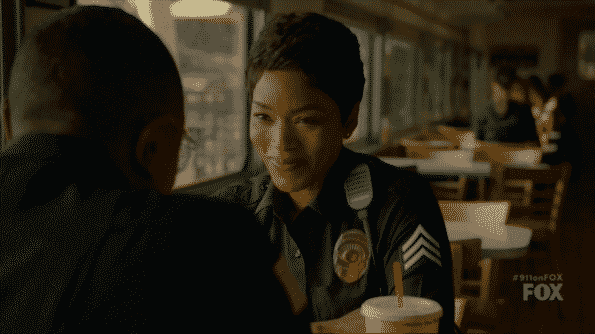 Most of the friendships and relationships on this show seem out of convenience or by force. Chimney and Hen interact with Bobby and Buck because they are co-workers. Abby and Buck date because, otherwise, Abby would be completely disconnected from the show’s more active cast members. Plus, you have to have one functioning relationship right?

But when it comes to Athena and Hen, you don’t get that vibe. There isn’t some checklist or attempt to keep a character who seems far separated from the cast tied to the characters who seem essential. There is a bonafide sisterhood with chemistry. Not in the romantic sense, but the kind for Black folks who predominately don’t find themselves amongst their own, that sort of check-in, you good sis? Type of relationship.

In episode 2 and 3, we learn May, Athena’s daughter, attempted suicide due to being bullied. Which, on any other show would have been a quality storyline for a young actress. However, this is a Ryan Murphy production and that means a few things: The first, the show will peak early and then rush downhill; the second, sensationalism is a key part in trying to keep you interested; and third, no one in their profession is really that professional.

We see that with how Athena handles her daughter’s former friends by publicly arresting them and then, when she gets desk duty, it lasts not even one full episode. And the funny thing is, she gets put on desk duty more than once and is right back on the streets in no time. Which, in a way, seems like an LAPD joke, that they could get away with anything, but it also pushes how this show is more about creating pops for viewers interest, even if short-term, than worrying about the long-term issues of cutting corners.

Another good example would be Chimney’s accident. He has a Final Destination moment and has a rebar go through his head and while it effectively ends any development he had as a character, it also leaves you scratching your head. Within a few episodes he is back, seemingly is done with therapy and is back to being an EMT like he didn’t just have a traumatic brain injury. Know why? Because it magically went through his head without seriously hitting anything.

And let me say, I get that shows need tentpole moments and things which are “water cooler chat” worthy. The problem is, 9-1-1 throws those topics out there and doesn’t build on them afterwards. Making it where, no matter if you are talking about crazy 911 calls or the personal lives of the characters, you build up a tolerance too quickly to the drama. Making it where what for you would be an extreme quickly becomes normalized on the show. As if the characters may experience setbacks but they bounce back so quickly it truly is just an inconvenience. Like someone immortal having to dig bullets out of them or else they’ll experience minor discomfort.

The main issue with Abby has and always will be that it seemed like the writers didn’t know what to do with her. With Connie Britton reportedly only signing up for one season, and iffy on a second, so made it difficult to make long-term decisions. How can you write a character whose actress may quit? So, they give her this sort of Harold & Maude

type of relationship, or rather How Stella Got Her Groove Back

One in which, honestly, it felt like they rushed Buck’s development from a whore to someone looking for stability while also using him to keep a door open for her to be part of the regular cast. Creating a very weird dynamic which, sometimes, made Abby and Buck seemed force. For there is one moment, after a date with Buck goes terrible and you see Abby and Bobby together and you’re like, “Oh, so that’s what chemistry looks like.” Yet, Bobby and Abby never interact again after that moment. Seemingly because it is much more interesting to show the rare depiction of an older woman and young man than two people who seem compatible.

Generally speaking, while each character has an interesting angle from Athena’s husband coming out; Hen being a Black lesbian, with a Black wife and white ex who she had a kid with; Buck being a whore who found love; Chimney… trying to date; and Abby taking care of her mom, there isn’t across the board interest. Bobby, as noted, has a good storyline which evolves over the entire season. As for everyone else? Buck’s growth just comes off weird for he goes from using his job’s vehicles to meet girls and mess around to becoming a grown man. Chimney and Hen pretty much switch allocated screen time halfway through the season and while Athena’s storyline with Michael is interesting, it seems watered down. Perhaps even the type of story that, like with Abby’s, was a premise for a rejected show injected into this one just to see it play out.

Like many shows which have Ryan Murphy’s name on it, the premise is interesting, the highs are bonkers, but the main problem is that he creates shows that work best as mini-series or anthologies. When it comes to his programming, with him working on so many things, it is like as soon as things are set they are passed off and while you see his imagination, and his close partners, in the beginning, once someone else’s influence comes in, so goes the quality. The show loses its luster by the halfway mark, and this is true for nearly all of his series, and by the time its 12 or 10 episodes are over, you’re done and don’t necessarily want more. At least from the characters you’ve experienced.

Which is the issue at hand and why this is being labeled as mixed. Outside of Bobby’s storyline, which pretty much seems concluded at this point, there is no real selling point here. Yes, the 911 calls can be fascinating but after a few episodes, they find themselves unable to escalate things anymore to keep them interesting. Then with the characters, with Abby and Athena, it is like you are watching rejected shows on life support, but still hitting people’s TV sets. Then in terms of Hen and Chimney, you get almost this diversity twitch where you are going to present characters who don’t often get seen, yet not fully invest in them.

And overall, like Glee and so many other of Murphy’s shows, there comes a point where it isn’t so bad it’s good. You can’t use “campy” as the euphemism it is, and you just have to call it what it is. Which isn’t average, nor per se mediocre, but definitely something which is short lived and will feel like it overstays its welcome.

Has Another Season Been Confirmed?: Yes, per Deadline.