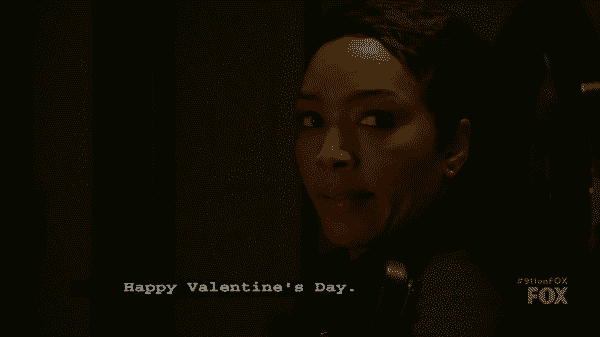 It’s Valentine’s Day! That means the 911 calls are laced with the themes of love or a woman scorned.

Chimney is back and it is like that rebar through his head was just a dramatic story for the sake of ratings! I mean, he can walk now, talk, even can go on runs and do everything he used to. It’s a miracle, right? But, that’s not the only miracle. After using sex addiction as an excuse for who knows how long, Buck gets coerced by Hen, when she meets Abby in person, to have a Valentine’s Day date. Something Buck hooks up and it makes for a really nice evening.

However, then Buck eats some bread and chokes. I’m talking beyond the Heimlich maneuver and Abby having to do a tracheotomy. But if you think her valentine’s day is going wrong? HA, Athena has her beat. She got a noise complaint call and meets this girl Melora. Someone a little skittish, definitely weird, but seemingly is just suffering from a broken heart.

The truth is though, her Valentine’s date, Ted, was cheating on her with two other women. She only knew about one when she chopped him up and super glued him back together, but heartbreak is heartbreak. However, she gets this brilliant idea! Since Athena was so nice and caring, take her heart and put it in Ted and he’d be the perfect man. Great idea right *eye twitch*?

Well, luckily while Athena is just finishing breaking the tape on her hands, note there is nothing around her ankles, showing you how Melora wasn’t thinking this through, Sandra comes in. I want to say Sandra is the girlfriend and the rest are his side chicks, but with Ted dead, we’ll never know. All that matters is Sandra banging on the door gives Athena the chance to knock Melora out and call homicide. Thus allowing her to end her evening with some wine left out and cookies baked by her family. With a nice card as well.

With Buck in a hospital bed, but alive, Abby just watches over him as Bobby comes in. They talk, keep it casual, and then go off for coffee. Which may not seem that noteworthy but I bring it up only because the lack of chemistry I, and some others, see between Buck and Abby does kind of show up for Abby and Bobby. So, here is to wondering if this may be the start of a dramatic love triangle.

While the opening 9-1-1 emergency was cute, this one took the cake. Hell, outside of the mini-Final Destination

roller coaster emergency, this situation might be the most memorable of the season. In fact, though it is a terrible thing to be typecasted for, arguably if Fatal Attraction

ever got remade, as a Lifetime movie, Megan Ferguson seems like the perfect person to star.

I don’t know if it is because the age thing isn’t there, learning Bobby’s story in the last episode, or what, but there is something about Bobby and Abby being together that just seems right. Granted, if the show goes down this route it means some eye-roll worthy male drama but look at it this way: It’s over Abby. A woman who isn’t some 20 something who could pass for a teenager but someone who clearly is a grown woman. One any man would be privileged to have the company of.

Plus, I gotta admit, seeing Abby deal with the idea of two men wanting to date her tickles the hell out of me.

Did they ever explain why Athena is no longer on desk duty? If they did, I missed it.

I’d have to re-watch for a proper answer (I’ll do that sometime this weekend), but I want to say that the complaint was dropped against Athena so she was taken off of desk duty. However, it could really just be that her being on desk duty wouldn’t really be good for the show so they nixed that in a rush. Productions by Ryan Murphy are known to brush over details which become inconvenient to the arc or the big picture.

Of course they never explained why Athena was no longer on desk duty on this episode. I’m also wondering the same thing.

Actually, the episode never explains why Athena was no longer on desk duty, which is too bad because I’m wondering the same.

On “Point of origin”, Athena says the complaint will be dropped if Laila’s charges are dismissed.