Patricia returns and it is questioned if Buck can handle her place in Abby’s life alongside if Athena is ready for a new relationship yet.

Athena Just Getting Her Groove Back: Athena, Aaron

Aaron is just what Athena needs at this moment in time. He is good in bed, wines and dines her, but the issue is, after 14 years of being with someone for the sake of kids, now she wants to be with someone just for fun. Call it a mid-life crisis or just recovering time lost being with a man who came out and got to have his fun. Either way, as much as Aaron is a good man, Athena is looking to have a ho phase. 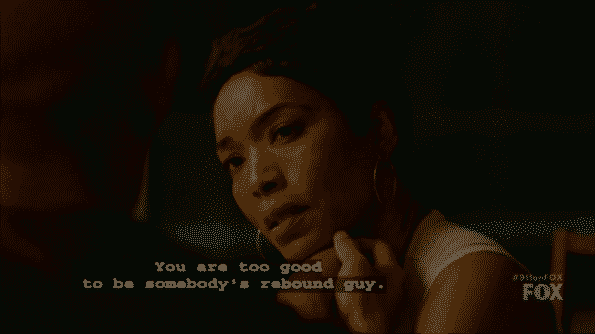 In this episode, the theme is less heavy-handed than usual and with Athena, you can see the idea of a relationship seems like a trap for her now. Especially since, what reason does she have to be in one? She has kids, her job is fulfilling, and Aaron proved she still got it. Why settle? She has spent 14 years with the same man and it likely has been years since she got properly d***ed down. Not to overdo the How Stella Got Her Groove Back

reference but, Athena essentially is trying to strengthen that curve in her spine.

With Athena having the time of her life, getting a divorce and working up a sweat, it is nice that she has Hen to giggle and howl about this refreshing new chapter in life. Even if Hen’s life is at the point where she isn’t sure between a divorce or custody, what may be the first court date she’ll have. But, while Karen still needs time, there is hope Eva will back down. For all Eva wants is Hen. Yes, being separated from her biological child is a factor, but what she wants really is a second chance.

However, sticking with the theme, the idea of reconciling with Eva feels like the worse kind of trap. Not a prison but a trap where you are stuck in a cycle. One in which, as Hen tries to build something for them, a home, family, stability, Eva takes it apart brick by brick. That is the reason why they aren’t together now. Yet, there is hope, such high hopes, Hen will see that Karen isn’t the one for her. Yet, despite their affair, it seems Hen is truly done with this woman and wants her out of her life. Even if it requires paying her to do so. Though the cast is already a bit large, especially if you take into account the guest stars, I would like to see Eva and Hen’s kid interact with his birth mom. Maybe Eva not winning custody but at least getting visitation rights. Which of course will rack Karen’s nerves but it’s only fair. While Eva may have permanently screwed up her relationship with Hen, that doesn’t mean she shouldn’t be able to see her kid. Even if she made a terrible romantic partner, it doesn’t mean she’ll make a terrible mom. Especially with her having the example, and competing with, two other mothers.

When A Trap Feels Like Home: Abby, Buck, Bobby, Patricia

Patricia is getting worse. I’m talking to the point she smacks the living daylights out of Abby when she is trying to leave for work and Carla is losing her ability to do much. Something that sort of weighs on Buck for he is just 26. While he loves the woman Abby is, understandably, he isn’t sure if he is ready for that kind of baggage. Yet, speaking from someone who had a good woman, Bobby tries to set him straight and, as quoted below, relays that great people, with full lives, usually have those who depend on them – baggage.

Which, in the case of Abby, is her mom and when it comes to Buck, it is the fact he has had commitment issues, is a bit insecure, and has a very dangerous job. There are natural tradeoffs. Yet, knowing finding a woman like Abby isn’t easy, even as she tries to give him an out, because of how bad her mom is getting, he doubles down.

Something which, though a kind gesture, may no longer be necessary. If only because it seems Patricia may have died. However, we haven’t gotten the 911 call yet, and a doctor, to confirm. You have to enjoy the parallels which go on here. Athena, nearly twice Buck’s age, is trying to be free, sleep around, and just have fun – no strings or baggage. Buck, on the other hand, he wouldn’t mind settling down with Abby, helping her with her cross to bear, and connecting some strings to keep them tied together.

But, if Abby’s mom has truly died, so comes the question of what will happen once the reason for her not being able to live to the fullest is gone. Again leading to an Athena comparison. Because of her biological clock, certain things were settled on. That is, until now with her kids being old enough to fairly take care of themselves and the trap which was her marriage, being no more. Now, in terms of Abby, as the quote notes below, her trap, her mother, gave her purpose, a sense of home, and pushed her forward. So now, without that, what will drive her?

Will it be, once more like Athena, her work? Unfortunately, as seen since she started dating Buck, and getting more involved, taking the calls by itself doesn’t necessarily fulfill Abby. It is being part of the action, getting to perhaps get her hands dirty, that excitement, that drove her. And with that in mind, it makes you wonder if Buck can fill in the hole Patricia will leave. Can he prove himself to be more than just the excitement of a young man’s attraction? For, and maybe this is far-fetched, there is a thought that with her mom gone, and her being able to do and pursue what she likes, she might just quit being a 911 operator. Maybe take some time to see who she is away from that job, now without her mom, and maybe without Buck as well.

“People who are great tend to have full lives, with people who depend on them.”

“[…] traps don’t look the same to everybody, especially not from inside one. Sometimes what the rest of the world sees as having us pinned, actually ends up pushing us forward, giving us purpose, control, someone to talk to. And once in a while, the very thing everyone thinks is holding us back, is also what makes us feel at home.”