9-1-1 continues to fully commit to doing themes and for this one, it is all about karma being a bitch.

The episode’s theme is that Karma is a bitch and this gets seen over and over again. You have a man who was an abusive husband dying because the tree in which his wife used to shoot at, and hanged herself on, he tries to destroy it with explosions and one of her old bullets hits him. A man decides to harass a tiger, and was known for killing a protected lion, and he gets made into lunch, and a few other stories.

This theme runs through Hen’s day and it makes the weight of confessing to Karen about her affair with Eva debilitating. Yet, Karma’s a bitch, right? Eva uses the affair they had to sue for custody so on top of possibly losing her wife, now Hen has to worry about losing her son too. But, Athena tries to give her encouraging words about the whole situation, relating it to her own. Pushing the idea that there was an issue with their marriage before Eva came in and maybe this, in the long run, may make their marriage stronger. An odd idea, but it becomes a bit more understandable as we focus on Athena’s storyline. 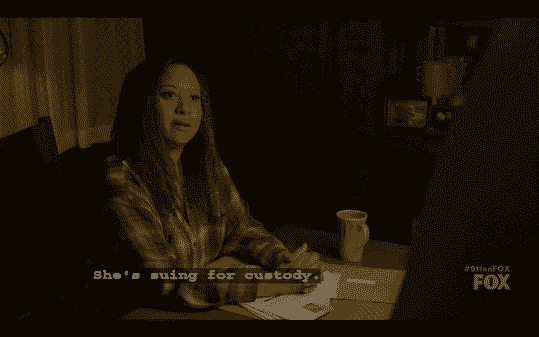 I wonder if Eva pulling this custody thing is so that she can officially get Hen back? Perhaps in her mind, despite being an ex-con now, she figures that with the affair happening, Hen isn’t happy and by getting Denny, there is no reason for Hen to stay with Karen. Though, on the flip side, who is to say Eva isn’t trying to get Denny back for the purpose of child support to live off of? She knows Hen is doing well, I’m sure Karen is too, and that could mean a decent payday for her every two weeks, on top of whatever she makes at her accounting job – assuming she keeps that.

Friends and Family Don’t Lie To Each Other: Athena, Michael, May

It has long been known that Athena isn’t happy about her living situation. In fact, many a criminal has taken the misdirected anger of Athena having to hold her tongue to keep her family in peace. However, after talking to May and realizing her kids are as unhappy about the situation as she is, faking it, it is decided that they shall fake it no more. To maintain their friendship, and so her animosity doesn’t fester as Michael is out dating, living his life, while Athena is in limbo, she gets a divorce lawyer and advises Michael to get one too. And the icing on the cake is, not too long after all this happens, Athena goes to a bar and gets hit on by a man named Aaron. So, it seems all Athena had to do was go out somewhere if she wanted to have some cake and eat it too.

The way Athena handles Michael being gay sometimes makes me wonder if she is kind of homophobic. Not in terms of her trying to change legislation of calling Michael a fag but the kind of homophobic where you are fine with gay people as long as they aren’t in your space or family. Granted, her husband coming out to her is probably the source for most of this hatred, but with all this talk about karma and secrets, you have to wonder if the theme was meant to be obvious for every single storyline or only a few?

Paying Back Your Debt With Interest: Chimney, Bobby

Being that Chimney was saved thanks to getting 10 pints of blood, and the theme is karma, he joins Athena in not getting the “Karma is a bitch” treatment in the form of having a blood drive. One which, curiously, Bobby doesn’t want to do. Which seemingly is due to a fear of needles. A fear shown in a slightly comical way.

But, because Bobby easily can succumb to peer pressure, he ends up doing it and learns his blood is good to help fight against Rhesus disease. Something which mostly affects babies and pregnant mothers and can be quite fatal. Yet, thanks to Bobby, and a gentleman in Australia, their blood alleviates the issue. Problem is, Bobby doesn’t really want to donate blood. In fact, all he wants to do is finish redeeming himself for the 148 who died because of him and he wants out. I’m talking suicide.

Which, of course, with him telling Chimney of all people, he isn’t pointed towards therapy, maybe going to church more or anything like that. All Chimney can think about is how many kids Bobby could save so despite how clearly messed up Bobby is, Chimney decides to instead guilt Bobby into donating blood. Though, I should add, considering Bobby openly talks about suicide after hitting his number to his priest, going to church probably wouldn’t help much. Am I the only one who thinks what Bobby needed, after his confession, was more so a therapist than to be coerced into seeing the good he can do? All this means, in my mind, is he now can speed up the process of hitting 148. For yeah, he may feel bad about all the kids he can’t save but, thinking long term, when he isn’t in an awkward position with someone who clearly isn’t listening, what he wants is to pay his debt and die.

But, based on the way this show has been, who knows if they may dive back into the fact Bobby is having suicidal thoughts. Maybe his blood being golden is how they planned to put off him thinking about drinking, killing himself, or putting himself in a position to be killed on purpose. I mean, look at how they handled Athena getting off a desk. All things considered, she abused her powers on a minor. Just because the child was being bullied.

Which, don’t get me wrong, is a serious matter, but considering Athena went into the child’s home, arrested her like she had a warrant for her arrest, and the shame and embarrassment she put on that family? The fact that whole situation just blew over speaks volumes about how Bobby confessing to wanting to kill himself might get handled. It may be treated as something for #911onFox fodder, but might not be something taken into account again.

“Kids love their daddies, but they follow their mother’s lead.”

“It’s only when secrets are revealed we know how good or bad a marriage is.”

Just in case someone asks, this episode doesn’t explain why Athena is no longer on desk duty (she was put on desk duty as a protocol, after killing a drunk man, in the previous episode).