As it seems 9-1-1 digs into the idea of doing themed episodes, we witness the strange calls which happen the night of a full moon.

And I Just Got Off Desk Duty: Athena, Hen

With it being the night of a full moon, it seems all kinds of crazy have come out. There is a killer on the loose, a bunch of women, all in one room, having babies at one time, and then this dude, whose toxicology report only makes it seem he was drunk, eating people’s faces off. Of which leads Athena to first simply try to taze him. However, that doesn’t work. So, she follows that up with two bullets to the chest and a possible headshot – which Hen witnesses.

Leading to, once again, desk duty for Athena. But, with this being LA, and Athena part of LAPD, abuse of power and excessive force means what really? Plus, at least for this situation, she is justified in what she did. So, surely she’ll be back on patrol in no time. 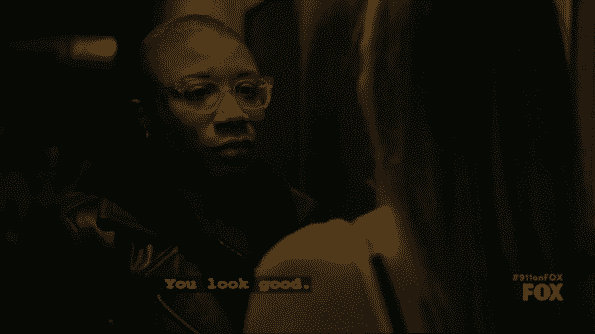 Though Karen and Hen are a loving couple, things have sort of fizzled out in the bedroom. To the point that Karen seems to miss sex like it is but a memory she has to really push to remember. But the real issue with them not having sex is Karen is the type of person who sees sex as what separates a friendship from a relationship and Hen enjoying cuddle time isn’t cutting it. And what doesn’t help this whole situation is that Eva has now been out for a week, got a job, a place, and calls Hen.

Leading to a bit of an issue. Karen is comfortable and reliable while Eva is dangerous and exciting. Something that Athena knows about and with overhearing one of Hen’s conversations, she gives some advice. Mind you, she recognizes she is in a glass house while speaking to Hen, but nonetheless warns her about the ticking bomb which may go off. Which Hen thinks means Karen exploding but Athena redirects that idea to Hen.

And she wasn’t wrong either. Eva and Hen hook up that night and while Hen regrets it, she knew what she was doing. Proving a point, that was stated in this article, that no matter where you are on the spectrum, dating and relationships with women will be a trial no matter which side of the fence you live on or visit. For, sadly, no matter who you choose, the same drama is always a possibility.

Abby loses someone this episode, and while it at first just sounded like maybe the caller was role-playing and having some kinky sex, in reality, she got murdered. In fact, she got murdered by someone’s ex-husband who was an abuser. But, when it comes to Detective Marks, he believes the killer of the woman on the phone was her ex-husband. Come to find out though, after Abby does some investigative work, it was actually the daughter of another 9-1-1 call she did earlier.

You see, Nora Curtis called 911 because she saw someone outside, though they were inside, and that was her daughter, Nora Jane’s, ex. Someone who killed Nora Jane’s domestic violence support group leader, Karen, since he thought she was with her, and he didn’t like her. However, with him having a soft spot for Nora Curtis, he didn’t kill her. He liked that old lady. But, with her leading him to Nora Jane, he fully intended to end her.

Luckily, with help from Athena, Abby tracks down that the killer wasn’t Karen’s ex but Nora Jane’s and this gives Nora Jane the time she needs to prep for his arrival and bash his head in. I’m talking about, she straight up murdered him. Leaving Abby with a bit more blood on her hands but, you know, better the crazy ex-husband murdered than another victim of domestic violence right? Abby and Buck Are Growing On Me

Though there is a low-key Harold and Maude

kind of vibe going here, despite Abby being nowhere near Maude’s age, they are low-key cute. I still see him as a How Stella Got Her Groove Back

kind of boy toy. One that likely isn’t long-term but, as a reintroduction to dating and sex, is just what Abby needs.

Is it wrong I’m for this affair? If only because, Eva is an ex-con and the drama of her messing up Hen’s life seems interesting to me. Especially since Hen has it pretty much together but you can also tell she is very used to being the boring one giving advice, or being a listening ear, to those with nothing but drama. It should be interesting to see things flipped a bit for her.

Okay, so really this is only the second one after the Valentine’s episode, but a pattern is a pattern and I don’t know how to feel about this. On one hand, it isn’t like there isn’t a huge amount of themes to go through from holidays, superstitions, and even maybe highlight certain diseases which aren’t talked about. If not weird cases that were in the news. Like a less serious Law & Order. However, no matter how you look at it, there will come a point that the cases are going to get too ridiculous and these characters are going to run out of steam. Especially if this show goes beyond 10-12 episodes in a season.

So, About Certain Storylines That Aren’t Mentioned

Athena’s daughter hasn’t been seen in a hot minute, Abby somehow has the apartment to herself and is getting desk duty just a regular thing for Athena? The way she hems and haws about it, you’d think it’s like her husband asking her to wash the dishes. Not a real punishment she should be worried about, but just some tedious thing she is used to and does begrudgingly so she doesn’t have to hear someone’s mouth.