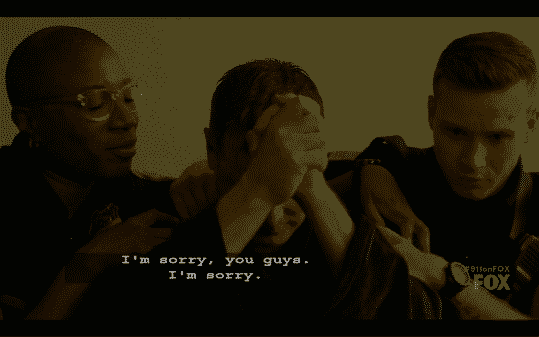 Bobby’s truth gets revealed, Athena crosses the line, and we get another episode with increasingly better guest performances.

Liberty Flight 46 goes down with 176 passengers and 6 crew members and our leads get called into action. Leading to Bobby, your usual stoic commander, experiencing a break. Something perhaps started by Buck by reading this little black book which may be all the people Bobby lost. However, with almost being unable to save this woman, Tammy, until a seriously last-minute save, it seems being put to the brink ends up pushing Bobby over.

Thus sending him down the bottle and ending his 18 months, about 546 days of sobriety. But, to make matters worse, he didn’t just fall off the wagon but ended up in the mud. Leading to Hen and Buck going to his apartment and discovering the truth about the life he keeps so private. Said truth being, he comes home to no one and yet still sets plates as if his wife and kids still wait for him.

It’ll be curious to learn if Bobby sets these plates either out of habit or if they are his means to cope. Also, taking note of the previews, I gotta admit I’m sort of questioning what happened, if not where, his family is. Did they die, did his wife leave him with the kids? If that’s the case, was it because of his drinking, the job, maybe how the job took a toll on his mental health and eventually their relationship?

I’m leaning towards them dying considering how, when he just started drinking, he was talking to one of his kids like they were there. Pushing the idea we weren’t experiencing a vocal only flashback but some kind of hallucination. A means of him coping with the fact he almost couldn’t save someone’s mother.

Though you also have to look at the fact, as Chimney noted in the last episode, no one really knows much about Bobby’s home life – and he likes to keep it that way. So while he gave Hen a key, with him not talking about his family, not having people visit, and what have you, so creates a sense of shame. Making it really hard to figure which of the two options are especially likely. For drinking was his means for coping when losing people, at work, so we can’t say his ex-triggered that.

You remember Laila right? The girl who bullied May, alongside Georgina, to the point she attempted suicide? Well, Athena decides it would be a good day to harass that little girl and even bring her to the precinct – all under the false pretense of there being a noise complaint. Leading to two things happening: The first, we learn Laila’s parents have been made aware by other parents about her bullying. Yet, they seemingly haven’t done anything. As seen by Laila getting to throw big after school parties.

The second thing that happens is Athena, for her abuse of power, gets restricted duty by Captain Maynard. Though, let’s add in, when she runs over to LAX and overrides another cop who is trying to keep people on a plane, because the airline’s CEO said to, she isn’t making things easy for the captain.

I can’t be the only one who thought, just maybe, Athena might get fired or suspended right? Granted, police unions got some strength, but Athena did head into someone’s home without a warrant, embarrassed and took into custody a minor, and it was all over something very personal. Yet, at the same time, this is the same city which is notorious for overstepping. So being put on desk duty might just be the usual slap on the wrist given.

But, slap on the wrist or not, you have to wonder if this may affect Michael and Athena getting May back. Things like what Athena did, more than likely, have to be reported and will cause serious issues. Though considering Athena and Michael will eventually have to get divorced, maybe this may be what pushes that up. That way, it might just be Athena who loses custody or rights while Michael can bring her home.

As you can imagine, and is shown, Abby spends a lot of her day not just taking calls and sending people over, but hearing the last things a person may ever say. This is the case for Dale who dies in the plane crash. Abby hears his final moments, calls Buck hoping he may provide hope, but alas the man is dead. So, going beyond, as she often does, she calls the widow, Annie, to hear the message her husband left.

And after all that stress and fatigue, she goes home to her mother. Someone who Carla is willing to spend some extra hours with, but Abby seemingly wants to be left alone. For while Carla is helpful, she is also a chatty Kathy. Which would mean, when Patricia is officially knocked out, Carla would likely bring up Buck and who knows what else. When really, all Abby wants to do is sleep.

Yet, not having Carla stay late bites her in the behind. For with Patricia overheated, and still very much mobile, she decides to escape the heat by leaving the apartment. Thus giving way to the need for a silver alert.

I feel like Patricia wandering off should have been expected, yet with Abby’s life being so normal and just a trigger for the big events of the episode, you easily can forget she has stuff going on. But maybe this may push her towards the front as some sense of urgency is finally introduced into her storyline. Though, I gotta say, a part of me increasingly wishes we got to know her co-workers more. Not in a swap stories type of way, but imagine the type of people who take on jobs like this. Much less, managing those people who have to hear kids whisper because they fear they or someone might be killed. Cases like Dale where he is about to die traumatically, and things of that nature.

With no offense to Connie Britton, I do feel like she needs better actors to play off of in order boost her character. For, as of right night, just playing off the actresses who play Carla and Patricia isn’t doing much for her at all.

Though Tammy, Dale, and Annie I might not remember by the time the season review comes around, they at least had a presence in this episode. To the point, I hope this momentum of interesting guest stars keeps up. Especially as things get a bit more melodramatic for our consistent characters.

Bobby’s Secret Is Out

While it is made clear in the premiere that Bobby is a recovering addict, not too long after that, everything became about Buck and Athena. Then, Chimney reopened the fact we didn’t know about Bobby much and here we are. Which leads to the question of where will we go from here? Hen is still grossly underdeveloped, we don’t see Michael unless Athena is around, and with May’s bully storyline becoming a big deal, so comes the question if she may get more airtime too? So, what about Bobby? Will they just keep this on an IV drip and address in the latter half or next season?

After all, we still got Chimney’s recovery to address and lord knows the plethora of other things. All within a season, being that this is a mid-season premiere, likely isn’t more than 10 – 13 episodes.

I have no way to watch this episode so I really appreciate your recap. Thanks so much! You have some interesting thoughts & I like how you take time to discuss the guest roles. (Anything more from this episode about Chimney or May? Thanks!!!)

Your comments about “Subplot 1: Abuse of Power” is well-taken. Law enforcement professionals I know don’t have kind thoughts about subordinates–let alone Sergeants, who should know better–exposing their entire Department to disaster like this. Btw, Claudia Christian (“Capt. Maynard”) did a superb job as Athena’s LAPD Bissau–tough but sympathetic, dedicated to protecting ALL of her people as best she can. A nuanced, powerful performance, Claudia at her best; she deserves a recurring role if anyone does!