“Insecure,” after a lengthy hiatus, returns, and while it does contain explosive moments, it’s the quiet ones that bring out its best scenes.

One of the central storylines is that Molly and Issa’s friendship seems to be at its end. With Issa gaining ground by doing something she is passionate about, and Molly having a stable relationship, their relationship needed to be readjusted. However, there is a problem with making the time to work out how they can be friends when they no longer fit an essential need. Thus leading to shady comments, mostly from Molly, a slight air of indifference, from Issa, and Kelli trying to balance that drama and help new mom Tiffany. Someone who, with Kelli, not on screen, goes through a lot.

As for the men? Well, Nathan is back and trying to get into Issa’s good graces, and Lawrence? Well, him and Condola are full steam ahead, but with Issa working with Condola, that complicates things. Which by the end of the season, what was once complicated, becomes a potential cluster f***. What you have to appreciate about “Insecure” is that it wants to be true to life. It wants to remind you that Black women often aren’t heard when they are having children about pains and worries, and how that leads to their mortality rate being what it is. “Insecure” desires to have women who are messy, but messy in ways its audience can be messy. But, most of all, the writers of “Insecure” want to make it clear, this show doesn’t do fan service.

Yes, it will give you a sense of closure sometimes, like it has done between Issa and Lawrence multiple times. Also, while they’ll allow Kelli to be a comic relief, as for who she is when she isn’t drunk or flirtatious? You’ll get that in bite-sized pieces. Hell, even with the couples, as seen by the last episode, you may think two people are end game but, guess what b****? YOU THOUGHT!

Issa Getting Answers From Lawrence & Nathan

Rehashing the closure topic, while primarily a comedy, every now and then, we go from Issa falling on her face in a club to having real conversations with her love interest. This season, once more, she talks with Lawrence, but they go beyond the apologies and ask the real questions. Why did Issa cheat, what led to Lawrence becoming a bum? In episode 8, this is dived into and leaves even those who thought the two were too toxic for one another coming around. 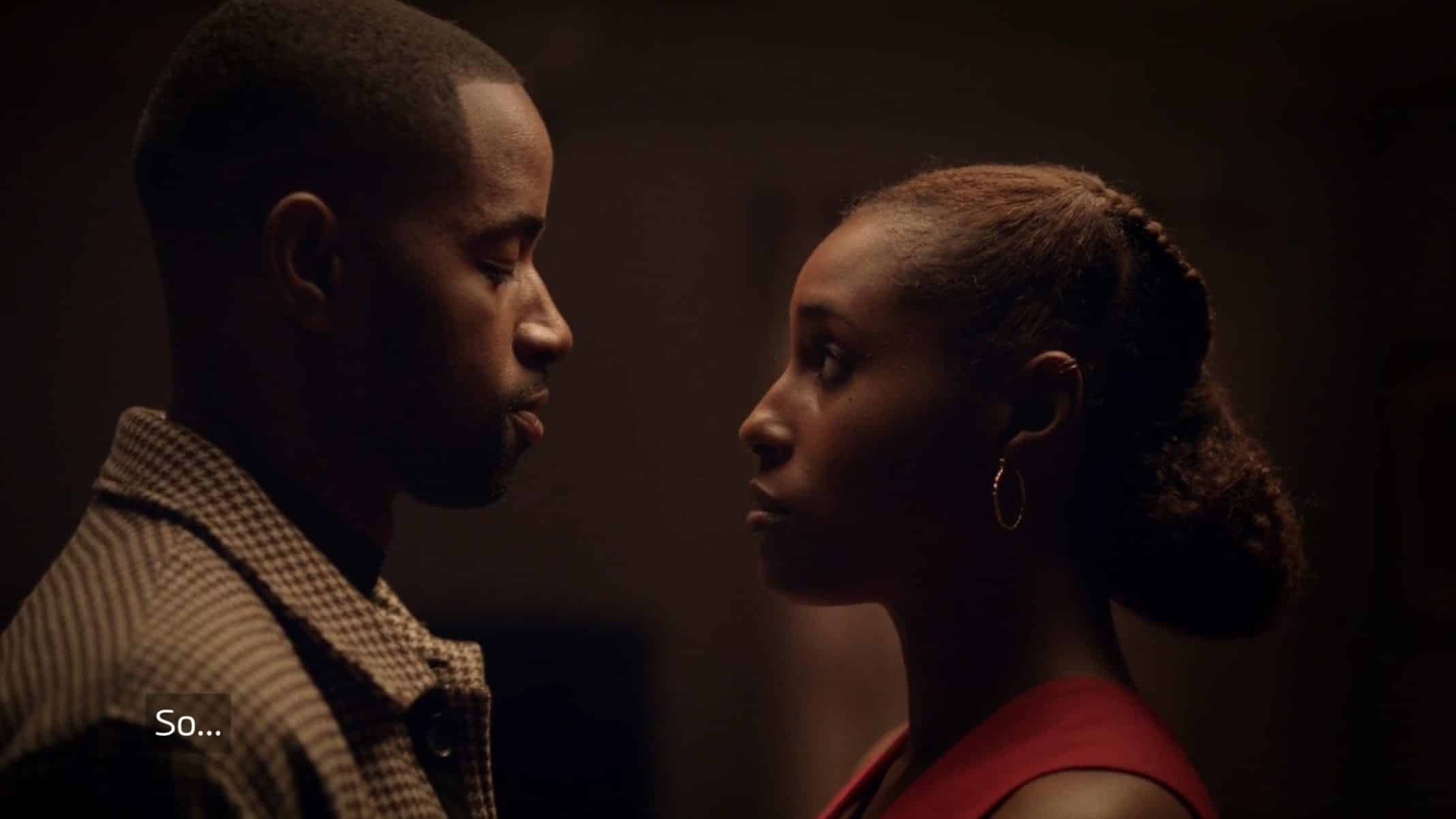 Then with Nathan, while the show doesn’t dig too deep into his mental health, with him talking about being bipolar and him trying to be there for Issa, you get the kind of love triangle we rarely see. For on top of it being a love triangle focused on a Black woman who doesn’t look ambiguous, its one featuring two grown men with flaws, but who are showing they are willing to make an effort to be and get better. Thus seriously complicating which prong you’re on between this guy, that guy, or Issa just being single.

The Growth We See With Issa & Struggle To Grow With Molly

Which wouldn’t be the worst option since Issa has not only found her passion but success. The block party may have taken an insurmountable amount of work, especially when Condola decides to give the deuces, but Issa did it and seemingly is prepping for her next event. But, with that kind of growth, we saw that people, Molly, had to readjust how their perceived Issa.

Leading us to Molly’s struggle, which was accepting it isn’t always other people who have to catch up. In terms of her relationships with Andrew and Issa, there was a need to recognize she can’t always be the victim. That reaching out, extending an olive branch, shouldn’t be associated with pride. Everyone is grown now. Talk out your issues, and don’t let things fester.

But, in Molly’s defense, with her having to adapt at work so she can fit in, try to acclimate to Andrew since, before him, dating was a struggle, you can understand why she wanted Issa to do the work. It’s like when Black women have to be on top of their game at work, and deal with people playing them, and then are heavily relied on within their families. It makes it so, when it comes to significant relationships, being submissive, letting someone else take the lead, it is desirable for you can’t do it all. Mentally and emotionally, it is just not possible without losing your mind.

All I’m going to say is, diversity comes in many different forms, and there is still a huge amount of work to do. For Black women, it is seeing more women who wouldn’t pass the paper bag test in lead roles. Also, it is seeing women who look like Kelli not be the funny one, but sometimes the sexy one, the woman who might just be a b****, for good reason too, and so many other different personas.

Then, for the men, it’s time for every dude to not look like he is trying to be an R&B star in the late 90s. Hence our love for the man named Calvin, aka “TSA Bae.” He was not skinny, he had rolls, and while he was played the same way Quentin was, when it came to Molly, at least he got his moment in the sun. One that should have lasted longer, but you know Issa got issues with shame, and TSA Bae was ghetto as all hell.

The Development of Issa’s Relationships With Her Family

For many characters, we see them around or interact with their family. Molly spends a great deal with hers in one episode, we see Kelli’s briefly, but Issa gets to actually grow with her family. Granted, Molly does work on forgiving her dad, but Issa has conversations with Ahmal, taking him beyond his comedic persona. Also, she has mother and daughter moments with Delilah that reminds you why parents need to make appearances on shows.

Issa, to her friends, is only going to be a certain persona since they haven’t seen, or don’t appreciate, the whole journey. Delilah? The one who has been there since Issa was pissing on herself? Not only has she seen the journey, but she can appreciate and even be inspired by it. Thus making you wonder, as we increasingly seen films focused on mothers and daughters, when will we get something akin to Issa and Delilah’s relationship?

What Could Have Been The End of Molly & Issa

Molly and Issa’s friendship ending wouldn’t have been the worst thing. Many shows skirt around the possibility of any major relationship, platonic or otherwise, ending, but the writers made it seem this could really be the end.

Now, granted, Issa ended things with Lawrence, and he was gone for half a season, at most. So Issa and Molly would have likely reconciled. However, there were moments, like when Molly was ready to lay some hands-on Issa, it seemed like the end of the line.

From Kyla Pratt to Kim Fields, while we didn’t get a parade of guest stars, we did for a few episodes see notable Black talent who I wished was someone’s new friend, cousin, sister, what have you. Even if some, like Pratt, would have wanted their character to stick to a PG-13 storyline.

The Lack of Kelli

With a Molly solo episode this season, and Tiffany having a notable focus in the last season, and a heartfelt moment in season 2, it seemed like it would be Kelli’s time. She is a fan favorite but has yet to really get any more than a few comedic scenes, and on the rare occasion, a sign that she isn’t the screw up her comedic persona would imply.

However, in season 4, all we got were teases. We got to see Kelli’s family, briefly. It was hinted that, behind the scenes, Kelli and Tiffany worked out their issues, which stemmed from Kelli not being part of the baby shower. Hell, considering Tiffany’s storyline and her having a bit of a break, you’d think we would have at least seen Kelli raising red flags and maybe Derek getting the chance to evolve past being Tiffany’s husband.

Nope. All opportunities are quickly walked past, and your left thinking they don’t want Natasha Rothwell to be great.

What Tiffany goes through is important, be it dealing with a blood clot during the birthing process or her going through post-partum depression. Our issue is, they brought up these topics but didn’t explore Tiffany’s journey to her form of rock bottom. Now, I write “her form of rock bottom” since she may not be as put together as we are used to, but she still ended up in a Sheraton. So, while not at her best, she didn’t plan to be somewhere that would make her feel worse.

Slight jokes aside, being that Tiffany, like Kelli, largely exist in an almost one-note capacity, with the rare glimpse there is more to her than it seems, again we’re left with a disservice. One that not only could have allowed Tiffany to break the façade with viewers but truly explore post-partum depression beyond, as Amanda Seales noted in the wine down, “acting for the back of the room.” Despite Kelli and Tiffany being given the short end of the stick, there is no denying that, while maybe not the most exciting season, “Insecure” certainly matured and pursued less comedic storylines. Which allowed its characters to grow, break down in some cases, and will enable them to come back stronger in season 5. Especially as the ladies of “Insecure” reunite and the men? Well, Derek and Lawrence may need to have a few conversations, especially about Lawrence’s baby on the way. Issa Getting Answers From Lawrence & Nathan - 86%

The Development of Issa's Relationships With Her Family - 85%

Despite Kelli and Tiffany being given the short end of the stick, there is no denying that, while maybe not the most exciting season, "Insecure" certainly matured and pursued less comedic storylines. Which allowed its characters to grow, break down in some cases, and will enable them to come back stronger in season 5.