What begins as a story about an adorable recluse becomes a rather bloody tale about how the lead character’s friend committed suicide.

When we meet Ai, she is a young girl out in the middle of the night for hard fathom reasons. Yet, after burying a bug, she finds herself talking with it and eventually going down this escalator, seemingly in a tree, and after falling down a hole, waking up in her bed – with an egg beside her.

But the eyebrow-raising doesn’t end there. Despite seemingly not having any medical problems, Ai is not going to school, and it seems her mother allows it, and the school is very much aware – as shown by her teacher dropping off classwork.

However, most of that is tame, even fanciful, compared to when Ai goes to leave the apartment in the middle of the night again, and she walks into a school where someone’s locker is having written “die” on it. Pushing you to think this is a nightmare and Wonder Egg Priority is revealing why Ai doesn’t go to school.

WRONG! She is in some fantasy world where she is forced to break the egg, and a girl is born from it named Kurumi, who gets chased by the murderous bullies. I’m talking one throws an axe, and there is blood. And all of this triggers us learning the real reason Ai doesn’t go to school: Koito. A girl who wanted to be Ai’s friend, but she had no desire to make it easy for her at all. And while she did eventually warm up to Koito, it seemed when Koito began to get bullied, Ai did nothing, and eventually Koito killed herself. 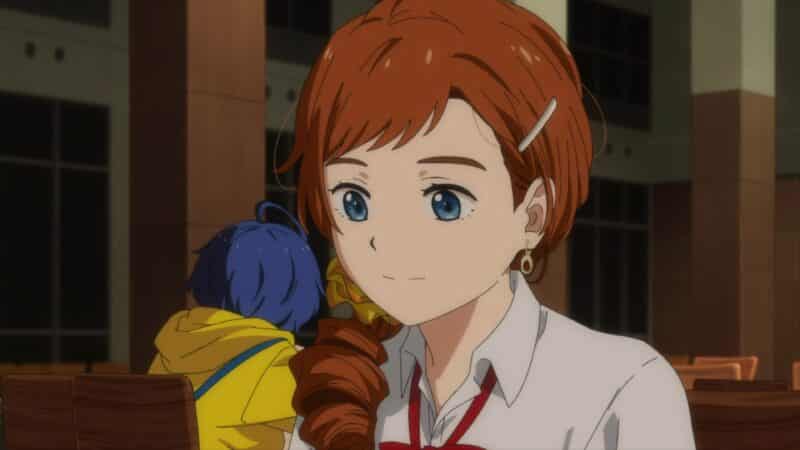 So how does this tie into the egg, Kurumi, and this strange world Ai walked into? Well, the bug she saved makes it seem she’ll be able to save Koito from death somehow. It isn’t detailed how history would be rewritten, but that it would come at a cost. Which for Ai might be that, while she is semi-immortal while in the dream world, with the task of saving people, when she returns to her world the injury will be real.

Which means while tasked with being a hero, Ai will have to balance the feats she is capable of in the fantasy world with the recovery she’ll need once the dream is over.

Nothing costs more than a free gift.

With this being an original anime, meaning no manga source, the previews were all the released information. Which, with us planning what we watch months back, we did not remember what we were walking into, just that it was on our calendar. So with Ai having this yellow jacket, burying a bug, and seeming quirky, we thought this would be some weird anime about an odd girl who skipped school.

But then Ai got transported to a magical world, and it went from seeming like some strange Alice In Wonderland inspired tale to us seeing a girl hatch from an egg, bullies chasing a girl and trying to kill her, and learning about a suicide. And the way this all unraveled, it left you wondering what was next without it feel like it was escalating.

Rather, the way Wonder Egg Priority handled its reveals made it seem nothing was about sensationalizing anything – be it bullying, suicide, or grief. Instead, there is this strange middle ground focused on tackling those themes but not in a way to be preachy or so real it causes a stir. Thus, it is hard to describe since there is a desire to find a comparison, but one doesn’t come to mind.

The Potential For An Emotional Impact

With Ai being bullied for having two different colored eyes paired with Koito’s suicide, there is the potential for tears and getting emotional. Especially considering the show is likely to build up to Koito’s suicide and depict Ai’s guilt from letting Koito be bullied and not doing anything. And when I tell you I am already feeling triggered, teary-eyed, and shivering, let’s just say I’m planning to have some Puffs nearby so that Wonder Egg Priority can’t catch me off guard.

There Is Just Enough Violence To Be Shocked, But Not Enough To Feel You Can Become Numb For What’s To Come

A lot of anime start things off ultra-violent to get your attention – action anime in particular. However, once you know what to expect, they either escalate to maintain that sense of shock, or you end up adjusted, and the violence loses its effect. With Wonder Egg Priority, you are given the idea that violence is used to drive emotion when necessary.

Granted, this is only the first episode, so things could change. But, while I don’t know if the word tasteful and violence should be used in the same sentence, I must admit that it seemed CloverWorks is looking to make that a way to describe the show. An anime that tastefully uses violence.

I’m hoping Wonder Egg Priority isn’t the type of show that starts off so good, with so much potential, then fizzles. For with Ai’s story, combined with Koito, and the emotions and violence presented, this could be one of the best anime of the season, perhaps even year.

Hence the initial opinion that this is worth recommending. But now, let’s see if it can maintain the quality the series premiere laid out.

The Potential For An Emotional Impact - 88%

There Is Just Enough Violence To Be Shocked, But Not Enough To Feel You Can Become Numb For What's To Come - 85%

with Ai's story, combined with Koito, and the emotions and violence presented, this could be one of the best anime of the season, perhaps even year.