“Cha Cha Real Smooth” is an undisputable reason to dust off your Apple TV+ account or start a free trial.

22-year-old Andrew is in a complicated place in his life. His ex has moved on, and he is now in his little brother David’s room and working at the mall. To further complicate things, he’s living in his stepdad’s house, and while his mom tries to play peacekeeper, Andrew likes to pick fights.

But, Andrew’s saving grace is his people skills. Hence, he got a job as a party starter for bar and bat mitzvahs for the local Jewish community. However, by helping one girl, Lola, feel seen and get on the dance floor, he meets one of his soulmates, Domino. It’s just too bad that she has a fiancé named Joseph, and it isn’t clear whether or not this is just Andrew falling in love with an older and unavailable woman all over again.

I know how to soft step, I just don’t want to right now.
— Andrew

22-year-old Andrew recently graduated with a marketing degree from Tulane and is unsure what’s next. His college girlfriend moved abroad and seemingly is moving on, he is sleeping in his little brother’s room, and the only job he seems to be able to secure is one at the mall.

David is in middle school, maybe early high school, and while things aren’t perfect at home, he is happy his brother is around. Especially to give advice about being in a relationship.

David and Andrew’s mom is Lisa, who appears to spend a good amount of her time drawing and navigating the politics of the various moms.

Lisa’s husband, Greg, is in the pharmaceutical industry, and Andrew often jokes he is miserable in life.

Like Lisa, Domino doesn’t appear to have a day job and mostly focuses on working inside the home. However, this doesn’t mean she doesn’t like to go out and socialize, even if she does sometimes find herself doing so to keep up appearances.

Lola is in David’s grade and loves puzzles. She also is autistic and bullied quite a bit by her peers – boys especially.

Joseph is Domino’s fiancé whose house she lives in. He is also a lawyer.

Half siblings and step-parents are usually the sources of so much drama, and in some ways, that holds true for “Cha Cha Real Smooth.” Greg, Andrew’s stepdad, does butt heads with his stepson, and Lisa does find herself sometimes getting involved. However, it rarely gets as nasty as you’d expect, based on the precedents set by many similar families.

Yes, Greg and Andrew don’t see eye to eye, but they can agree on loving Lisa and David deeply, and because of that, they use that commonality to make peace. Heck, if you believe Lisa, Greg actually likes Andrew but simply thinks he isn’t living up to his potential.

But let’s go into Lisa and Andrew’s relationship. The beauty of those two is that Andrew might be 22, but he knows his mom. He knows she is bipolar and has really bad days sometimes, but despite that, she tried to be the best mom she could. This is important for that helps you understand where Andrew gets his emotional intelligence, or maybe social intelligence, from. Through his mom being open with her struggles, Andrew was able to use her experience and his reaction to what she went through to be all he is to not only Domino and Lola but David.

Now, while it is sweet the relationship Andrew has with his mom and stepdad, even Lola and Domino, one of the big-time hooks of “Cha Cha Real Smooth” is Andrew’s relationship with David. In many ways, Andrew is David’s best friend or one of the people he is closest with. Despite their age gap, David looks to Andrew for advice, his friends like him, and he’s cool. But, most of all, when Andrew acts like an adult, he isn’t above apologizing to David, who you can see has his feelings hurt when he can’t be there for his brother like Andrew often is for him.

Truly, their relationship will trigger you crying. Whether you have or are close to your sibling(s) or not.

Whether you’re talking about Lisa being bi-polar or Domino talking about depression, it never feels like it is for the sake of adding drama or to be some interesting anecdote to add some flavor to these characters. Lisa being bipolar and how she would talk to Andrew as a child gives grace and allows for understanding. Domino talking about her struggles before and after motherhood allows you to see the day-to-day of someone struggling with a mental illness rather than only seeing the extremes of depression and mania.

Together, they present something different to the conversation of what it is like to live with a mental illness that doesn’t feel common. It’s something you live with, maybe are overwhelmed by on some days, but it doesn’t have to be this debilitating thing that leads to substance abuse all the time or horrible decisions.

Depiction of a Miscarriage

It was shocking to see Domino bleed so much and, for the uninitiated, like Andrew, you could assume she was just having a really heavy period. However, there is something about Domino having a miscarriage and it not dominating her story, which was refreshing. It showed it as something quite traumatic and inconvenient, but at the same time, it doesn’t define you.

In fact, after the incident, it is not even brought up in conversation!

Depiction of an Autistic Female

Outside of “Everything Gonna Be Okay,” you might be hard-pressed to find depictions of autistic girls and women. Yes, “Atypical” featured one or two, but in terms of recent, mainstream releases – especially in a scripted production? It’s a struggle.

Which is why Lola was so important. She, like her mother, is written to be a whole person. She likes potato smashers, a nice back-scratching, but like many people who are autistic, she doesn’t want to be babied. Treated nicely, of course, but while recognized as an individual with thoughts, feelings, opinions, and more.

And while Lola isn’t the biggest role in “Cha Cha Real Smooth,” there is no denying she plays a memorable one that can stay with you and set a precedent.

There Isn’t Much In The Way Of Drama; it’s All About The Challenge Of Understanding Your Fellow Human

Whether it is between family members, friends, or those who have emotional feelings for one another, there isn’t unnecessary drama here. At least, not the kind of drama that feels avoidable, over the top, and eye-roll-inducing. Rather, “Cha Cha Real Smooth” pursues the legitimate drama that comes from people trying to understand each other with only their life experiences to guide them.

Prime example: Joseph and Andrew’s relationship is complicated because Andrew is clearly close to Joseph’s fiancée and his future stepdaughter. Then, to further complicate things, Joseph is often in Chicago, while Domino is in New Jersey. As you can imagine, this could easily lend itself to issues of Joseph being jealous and Andrew being as confrontational with him as he sometimes is with Greg.

However, that’s not the case here. While you can see Joseph can pick up there is a firm need for boundaries, he doesn’t slip into machismo and defends his woman or gets all up in Andrew’s face. There is a presumed innocence we don’t often see when two men interact and are connected by a woman. Almost as if Raiff took note of every last thing he was tired of seeing over and over and did everything he could to avoid those tropes.

Lastly, there is how Domino is written. Easily, you could imagine Domino, being an older woman and everything else she brings, as your usual female love interest who helps the male lead get his s*** together, but that isn’t the case. There is reciprocity in their relationship. With Andrew, Domino gets to feel at ease, less worried about how everyone else is doing, and adapting to their needs. When it comes to her one-on-one time with Andrew, she can live in the moment.

Which, for her, seemingly hasn’t been something easy to do. Whether it is her mental health, past marriage, taking care of her daughter, or even dealing with the other moms, you can see the weight of life is sometimes a bit too heavy for Domino. Ultimately making it seem she is less so Andrew’s love interest and more so an equal to his character as a co-lead. Just one who we don’t see often if Andrew isn’t around. 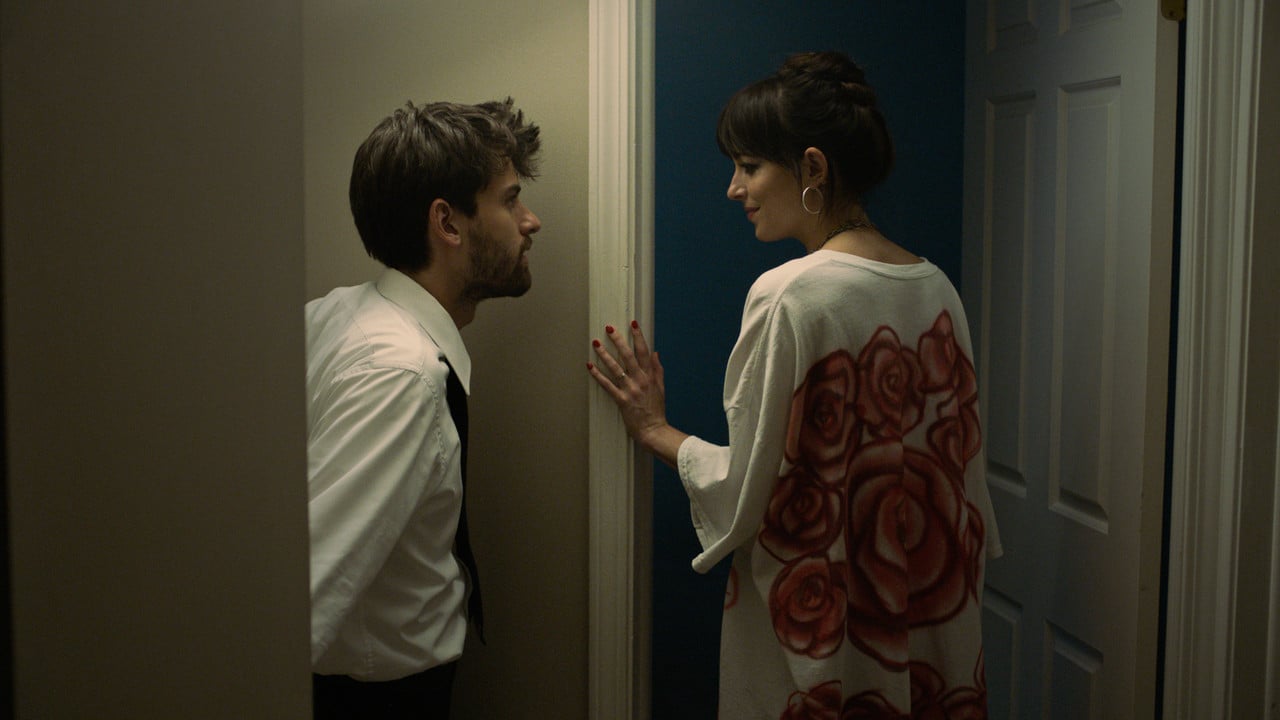 Cha Cha Real Smooth (2022) – Review/ Summary (with Spoilers)
Overall
“Cha Cha Real Smooth” right now is probably the best film of the year to us. It has everything you’d expect from a film made in 2022, from addressing mental health, to strong female characters, and honestly, the only thing it is missing is racial diversity. But you don’t even really think about that because of how absorbed you get into individual characters and their relationships.
Highlights
Domino Is Her Own Person – She Is So Much More Than Andrew’s Love Interest
There Isn’t Much In The Way Of Drama; it’s All About The Challenge Of Understanding Your Fellow Human
Depiction of an Autistic Female
Depiction of a Miscarriage
Depiction of Mental Illness
Andrew’s Family Dynamic
Disputable
86
Follow Wherever I Look on Twitter and Instagram, Like us on Facebook, and Subscribe to the YouTube Channel.