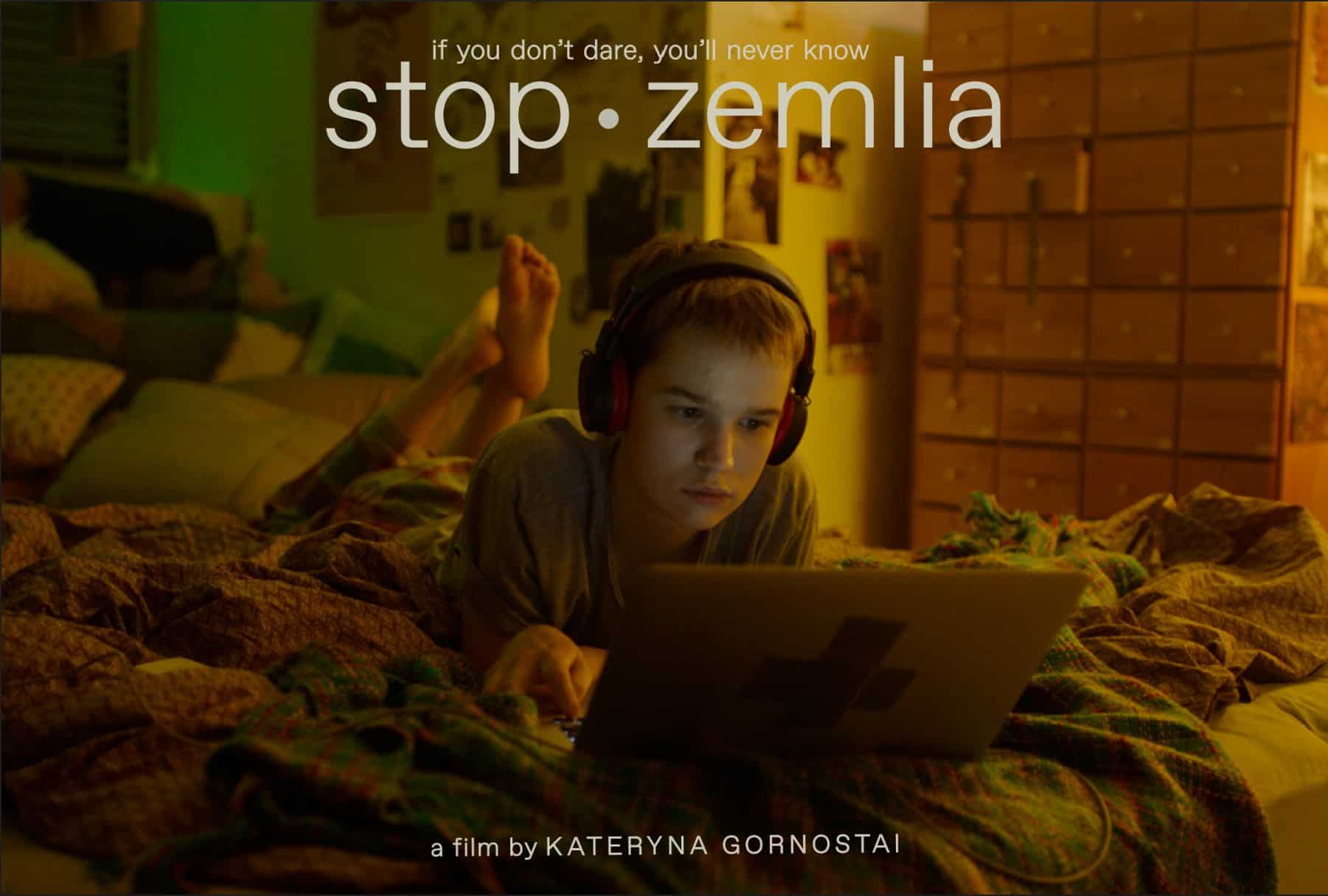 In Stop-Zemlia, it feels like you learn so much yet so little, but considering the constant shifts in friendships and self-image as a teenager, it is almost fitting.

It’s senior year for Masha and her friends, and with someone interviewing them and asking questions regarding their life as it is and what they hope for the future, this triggers a realization of fleeting youth for many. For with the full weight of adulthood on the horizon, so comes the need to gain as many moments to remember in this fragile transition period. For example, the lead, Masha, pushes herself to talk to her crush, Sasha. Also, she is trying to spend as much time as she can with her best friends Senia and Yana. All while talking to a mysterious stranger known as “Gryum74” on Instagram, who she so dearly hopes is someone who she can be mutually attracted to.

Considered normal, maybe even unremarkable by her peers, Masha lives her life mainly focused on her friendship with Senia and Yana, potentially applying to a university, and dealing with her obnoxious little brother. Though, as she develops a crush for a classmate, heavy feelings start to overcome her, and an incident worries her parents, as it triggers their memories of a darker time in Masha’s life.

Unlike Masha, Senia comes from a dysfunctional family and an area that has left him with a bit of trauma. Yet, despite his home life and upbringing, he is the most chill of his friend group. Perhaps due to, what he doesn’t get in his own home, Masha’s provides him, including a safe space to talk about his sexuality.

The third of Masha and Senia’s trio is perhaps the most social of the three, mainly since she goes on dates. However, she spends most of her time with her crew, and there is even a need to wonder, between the three, if she is willing to explore feelings and ideas with them.

In Sasha’s friend group, he easily can go from being picked on to the center of everything, and it’s a nice alternative to life with his mother who

They say when you get goosebumps, that’s the soul-touching the body.
— Gryum74

“I am not there anymore. And I’m not there yet. I am here, and I should use that.”
— Masha

“[…] we forget that when you’re a teenager, everything is literally happening for the first time. Growing up is dramatic! It’s emotional, it’s sad, and it’s really amazing.” Rowan Blanchard

It is easy to forget how stressful the teenage years were with age. This is especially true as more and more media presents a heightened dramatic form filled with drugs, parties, and excess. But, what Stop-Zemlia aims to present is the realities of youth without access to the rich or privileged. While making it clear, though many do have access to drugs, alcohol, and sex partners, that isn’t everyone’s normal.

For some, like Masha, just getting a date, someone with a mutual attraction, is hard to achieve. So, you seek out platonic love to compensate for the romantic love missing in your life. Which, at times, with hormones ranging, is frustrating to the point of being tired, and loneliness feeling akin to depression.

Though it isn’t just Masha who is going through things. Despite his close relationship with Masha and Yana leading to a litany of rumors, Senia is struggling as well. He is a young person unsure of his sexuality, and even in terms of the possibility of being bi, there are levels that he has yet to explore. Then, when it comes to Yana, beyond knowing the various terminology associated with mental health, she has a diagnosis and has to deal with the confirmation that the chemistry in her brain fights against her. Never mind the stigma which comes with that.

Together, alongside Sasha, who is dealing with issues with his mother, peers, and unrequited love, we’re reminded how what now can be seen as little problems used to be our entire world. And because of that, each day was overwhelming as we were bombarded with new stimuli, minimum people to help ease drowning from the latest wave, and the constant need to question when, or if, we’d build a tolerance or find any of what’s happening normal.

No Paralysis Through Analysis

The heading is a line from Will Smith’s book, “Will,” but is also apt to Masha’s overall experience and her final statement in the film. In pondering too much about the past’s effect on the present and worrying about what will be of your future, the present is forgotten and what realm of control you have over that. As Masha says, “I am not there anymore. And I’m not there yet. I am here, and I should use that.”

Those words hit us hard since, even as you get older, there is the question of where you might have gone wrong as regrets build up with every decision. Yet, there is nothing you can do about the past. It is set in stone, and while there are certain paths set up due to past decisions, some out of your control, you have the present to take hold of your future, correct your past, if not own it and do something with it that is beneficial to you.

For paralysis through analysis will have you dwelling on all the what-ifs and not exhibit some sort of action. And while you can see Masha so dearly wishes for the interviewer to relate, connect, perhaps give hope and guidance, you can also see Masha found it on her own. She’d love someone to validate her feelings and choices, but she has found the strength to move forward even without a co-signer.

Outside Of The Core Characters, It’s Easy To Get Lost In Who Everyone Else Is

Beyond the main four mentioned, there are at least half a dozen other characters. Each one brings a litany of other perspectives, experiences, and issues but, even with nearly two hours to get to know them, you may have a difficult time grasping who is who. In some ways, this is understandable, as we probably get to know them to the extent our lead, Masha, does.

Yet, in the tease of these vibrant personalities, of which there isn’t any sense of them being homogenous, it is sad, if not disappointing, that even with the time length this movie is, the majority of the cast slip your mind within hours of the movie being over.

While it is hard to grasp who is who when it comes to many of the supporting characters, there is no denying that every character, whether they are the lead or supporting, brings an authentic and relatable experience to Stop-Zemlia. One that strays away from the more sensationalized version of teens we often see and rather speaks to those who had a tight group of friends yet still could often feel lonely. Thus giving you that rare opportunity to feel seen.

Stop-Zemlia (2022) – Review/ Summary (with Spoilers)
Who Is This For?
Either teens and young adults struggling with both external and internal expectations, or those who are older who need a reminder of how, even for youth who don't live what can be seen as a "dramatic" or excessive lifestyle, there is a storm in them. One they sometimes aren't sure they'll survive.
Highlights
No Paralysis Through Analysis
Understanding What’s Mundane Externally But Causes Anxiety Internally
Disputable
Outside Of The Core Characters, It’s Easy To Get Lost In Who Everyone Else Is
83
Subscribe to our mailing list Follow Wherever I Look on Twitter and Instagram, Like us on Facebook, and Subscribe to the YouTube Channel.