The Eyes Of Tammy Faye reminds you how those who seek money and power exploit and tarnish those who have faith in God.

Poor Tammy Faye. Often shunned by her mother, Rachel, due to being born to a man who divorced her, and often the odd one out, it seems life was lonely and difficult until she met Jim Baker in college. But with them sharing faith and the belief God has something more in store for them than what their upbringing would hint to, they were quite the pair. However, while all Tammy wanted to do was preach love and sing about the blessing of being loved by the Lord, Jim had other ideas. All of which used Tammy for all she was worth and often left her hanging in the breeze.

The Complications of Faith

Faith is a deeply personal thing. As shown early on in the movie, having faith and going to church, for many that is where they build their sense of community, right and wrong, and sometimes discover their talent. And as seen both when Tammy was a child, and after the fall of the PTL, when you feel isolated and alone, faith can be your only solace. It reminds me of a quote from Scandal, “I have prayed to God over and over and where there once was his voice, the warmth of how love, there is now only cold silence. […] Without him, without the sign of his love, I am worse than dead.”

When you watch Tammy pray for answers, there is a recognition that she has no one else to turn to. She and her mother have a strained relationship, Tammy doesn’t seem to have friends, her husband is self-righteous, so who can she turn to? And it is through watching Tammy pray and try to have faith in her husband and the Lord, you understand how people like Jim Baker and his associates make money and exploit people’s faith.

After all, when the church gives you community, when praying is more about seeking validation and what you can get, rather than how you can serve? You get a bunch of people who easily can be manipulated into forgetting the basis of most faiths is to love and be of service. It isn’t about politics and casting judgments and seeking legal means to validate your opinion. As shown by Tammy, you don’t need to walk the same path with someone to love them and treat them with respect.

But, sadly, that is lost among us since seeing humanity as a whole doesn’t seem to be as uplifting to many as being part of s semi-exclusive tribe.

The Redemption Arc For Jim Baker and Rachel

Jim Baker and Tammy’s mother, Rachel, are love-to-hate type of characters. Rachel isn’t cruel in the sense of beating Tammy or being mentally or emotionally abusive, but you can see she unintentionally knows how to cut at Tammy. Not enough for Tammy to ever need to welp or scream out, but just enough to take a sliver of Tammy’s joy in the moment.

This truly is heartbreaking to see since all Tammy wants is for her mother to love her and not associate the mistake of her first marriage with Tammy’s existence. So when she warms up to Tammy, it honestly warms your heart.

The same could be said with Jim, who goes from being Tammy’s cheerleader to trying to smother who she is, make fun of her even, yet realize she is the only one who will stick by his side. Seeing the ebbs and flows of their relationship, especially noting how happy they were initially, really sets Chastain up to give a varied performance.

Tammy Faye is the type of character who will make you laugh, cry, think a little bit, and Chastain brings out every last bit of humanity she can. The kind that, depending on the actress, could have made Tammy a ridiculous joke. Yet, by showing that Tammy wanted to give people what she couldn’t get from others, it made every bold look, antic, and decision renew your faith. Especially in moments when she truly lived as a quintessential Christian. For example, even when some teens were making fun of her, she turned the other cheek, introduced herself, and didn’t berate them but tried to befriend them.

And mind you, Tammy isn’t shown to be an utter saint. However, when you consider all she gave to others with very little given in return and the fact she literally had to force others to give her a seat at the table? It makes any vice or attempt to attain reciprocity understandable. After all, if you spend most of your life trying to prove yourself worthy to someone beyond God, you too will become exhausted from trying to convince everyone of your worth.

It Has A Good Pace To It

Between skipping ahead in years every 20 or so minutes, Chastain playing up the more eccentric parts of Tammy Faye, and Garfield making sure Jim Bakker makes a good character to play off on, this doesn’t feel 2 hours. Which is saying something for a biopic since the genre isn’t known for really knowing how to use such a time length well. Never mind not peaking towards the middle and leaving you checking your watch every time you think the final scene hit, only for the movie to continue.

Alongside giving us an entertaining biopic of an eccentric and lovable figure, The Eyes of Tammy Faye also explores the business side of religion and reminds us of how and why being a person of faith has become so polarizing. 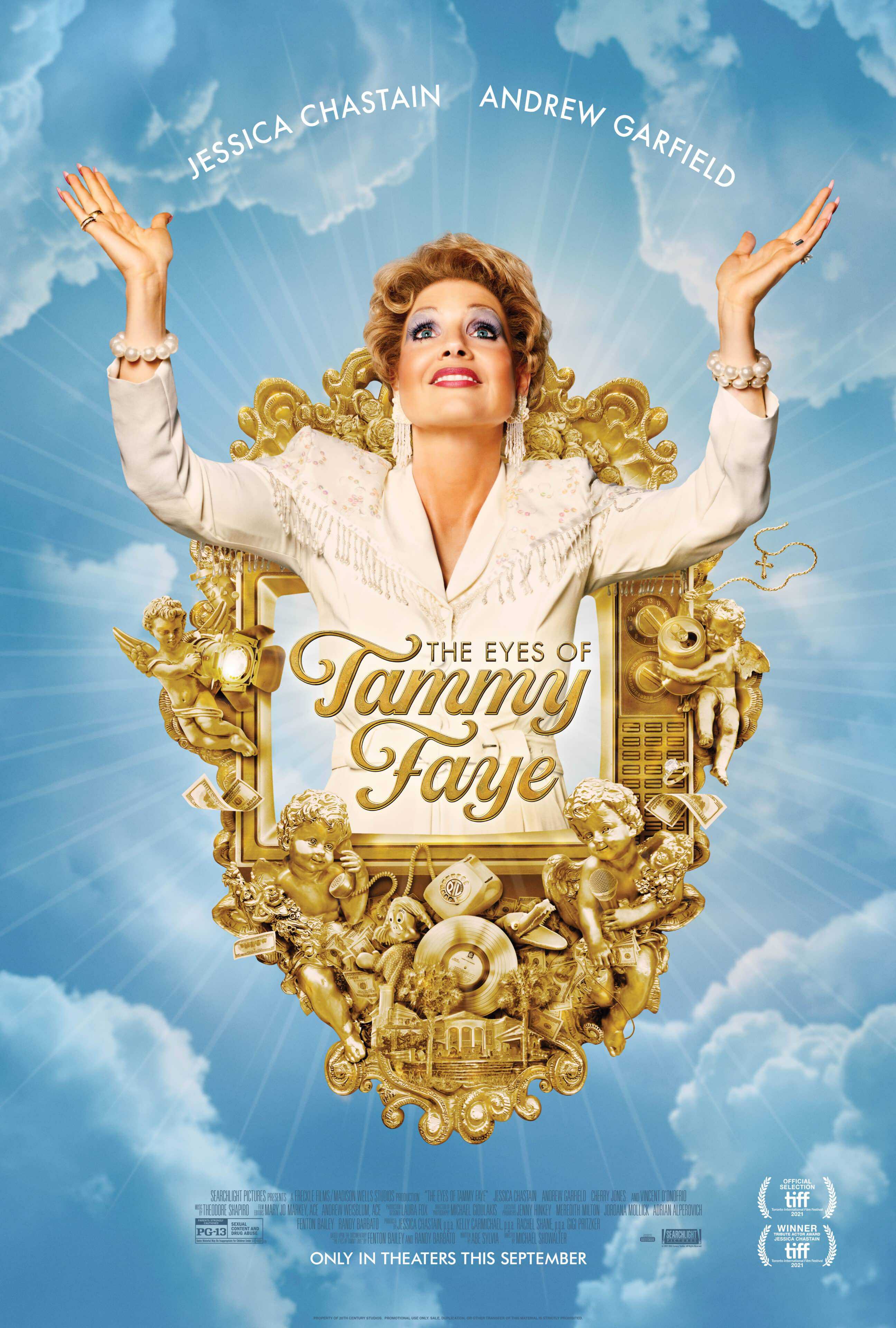 The Eyes of Tammy Faye (2021) – Review/Summary (with Spoilers)
Who Is This For?
Those interested in the story of Tammy Faye, the fall of the PTL, and who may want some understanding of why people cling onto faith.
Highlights
The Complications of Faith
The Redemption Arc For Jim Baker and Rachel
Jessica Chastain As Tammy Faye
It Has A Good Pace To It
Disputable
86
You Might Be Interested In