Hello, Goodbye, and Everything In Between (2022) – Review/ Summary (with Spoilers) 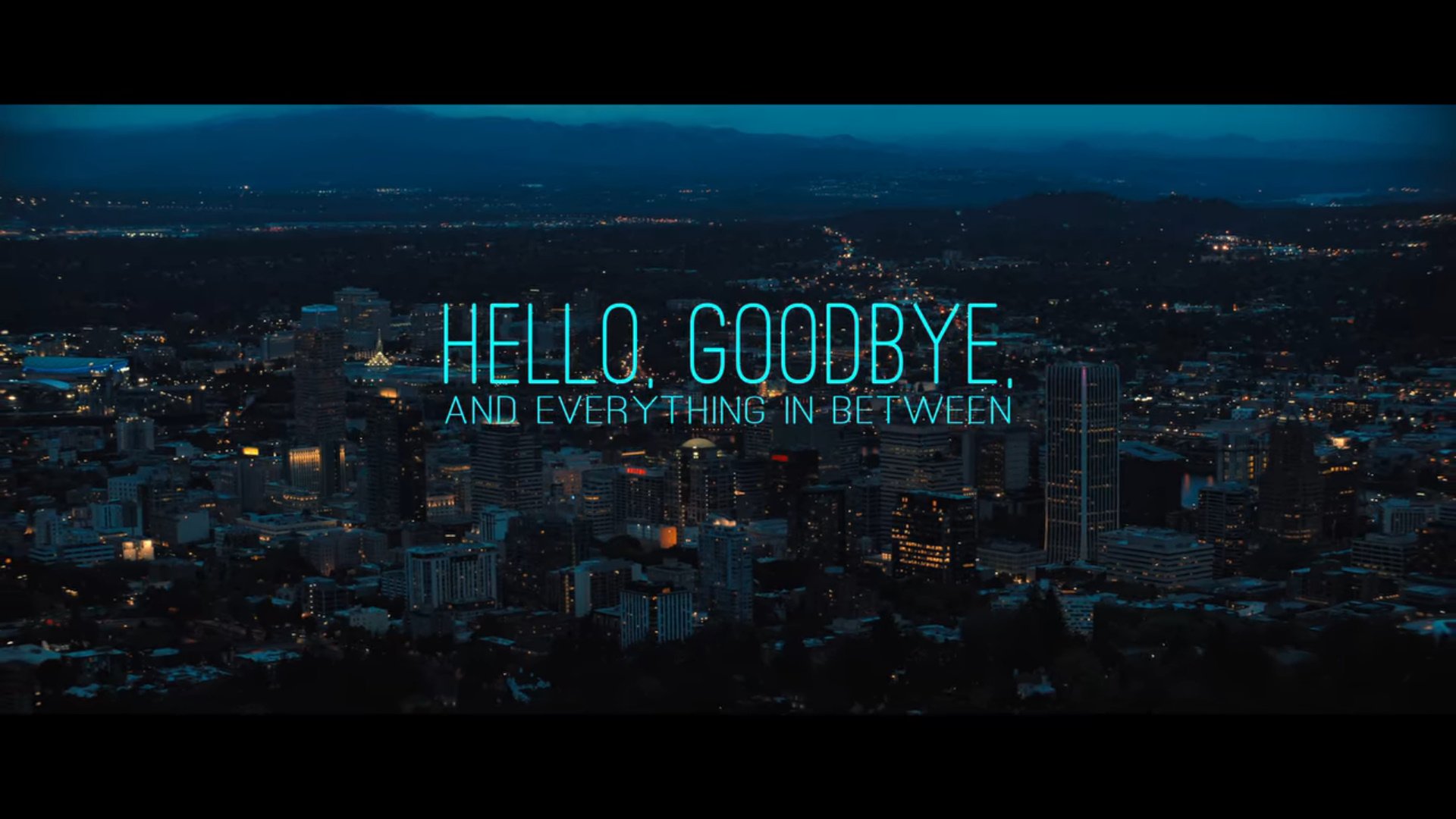 "Title Card featuring a city in the background," Hello, Goodbye, and Everything In Between, directed by Michael Lewen, 2022, (Netflix)

Thanks to her parents having a bad breakup and not living up to the high school sweethearts fantasy, a girl puts an endpoint on her high school romance, even if it could last forever.

Clare has had her life planned out since her parents broke up when she was in the first grade. For with going to six schools in three states throughout her life, what she wanted more than anything else is stability when she got older. So going to college and becoming a lawyer for those who need one was the plan. She wasn’t going to follow in her mother’s footsteps of letting a boy, or man, create instability and disruption in her life.

However, when her best friend Stella takes her to a party at the beginning of senior year, and Clare meets Aidan, he tempts her to divert from this plan. But, with him agreeing to have it all end when it is time for her to go to Dartmouth and him off on his great adventure, it seemed they were on the same page. But, on the last day they were to spend together, he plans a series of grand gestures, which makes it seem he no longer wants to honor the deal they made.

The product of high school sweethearts, who later divorced, Clare has not really had the best impression of what love is or could be. Because it led her mom to move a lot and fall in love often, she saw it as a distraction, a hindrance, and something to avoid. After all, she wanted stability in her life, so by studying hard, choosing a stable career, and the right school, Clare lived her life with a long-term plan and a series of goals to achieve. With the idea that everything before college is simply the prologue of her life.

Stella is Clare’s best friend who is queer, college-bound, and partly known for participating in the various musical theater productions at school, potentially more behind the curtain than in front of.

With two doctors as parents, it has long been the wish of Aidan’s parents for him to follow in their footsteps and become a doctor. However, going to Berkley has always been his dream, and pursuing music professionally. But with lacking the support of his parents and being part of a band, Aidan teeter totters between pursuing the perfect life he could have and settling for the reality that is easier to obtain.

Scotty is Aidan’s best friend, who is mischievous to the point of losing some senior privileges. But, while Scotty can be slightly uninhibited, he is harmless and just wants to have a good time.

Aidan and Clare’s Chemistry & Them Being Equals

While “Hello, Goodbye, and Everything in Between” does rush through the more romantic parts of Aidan and Clare’s relationship, it hits the points needed to see these two as a legitimate couple. Though originally, you could see these two as a opposites attract situation, then you come to see they are actually very similar. Yes, Aidan can come off spontaneous and carefree, but then you hear from Stella how much he uses his charm to control situations. Stella notes his need for perfection, and it helps you understand she sees and understands his issues because she has something similar.

For Aidan, his need to control is because he feels like his parents sealed his fate, and for Clare, her need for control comes from her parents not giving her the stability she wanted. And while, easily, you could imagine that Clare is simply his love interest because of the complexity that is pushed with Aidan, that isn’t the case here.

The trauma Clare holds from her parents’ relationship falling apart is deep, and her desire to not peak in high school is also there as well. Hence the idea of ending things isn’t exclusive to Aidan. In a way, it seems Scotty, Stella, and most of the people she has met in high school, she is ready to close that chapter of her life, with them not returning for later stories.

And it is in watching Aidan try to be the highlight of the moment and Clare trying to avoid letting this time of her life become so great it could fog her decision making which allows these two to be equals and perfect for each other.

Not to give too much away, but the way things end, it is perfect. It takes note that sometimes people grow apart, come back together, and other times they don’t. High school, and the teen years, are so volatile and emotional, and almost as soon as you graduate, there isn’t a gradual transition into adulthood. You’re thrust into it and now have to think about college, debt, getting a job, independence, and making these dreams you have worked so hard towards a reality.

Which makes relationships nice, but also an additional job you just don’t have time for. Especially a relationship which requires a full-time commitment and not a per-diem one that allows texts, and the occasional call, face time, or voice only, to be enough.

It Speeds Through Nearly 10 Months Of Their Relationship

While you will no doubt think Aidan and Clare are cute, you may wish you got to fall in love with the idea of them more before the fantasy starts to break apart. For just as you get caught in a lull, we’re reminded of the breakup pact, Aiden’s faults, and just the vibe that all the good and happy moments, we’re not going to get that. We’ll get a montage knowing they did more than hang out at each other’s houses but in terms of being allowed to be in a stupor thanks to watching young love? You don’t necessarily get such a treat.

Scotty and Stella are the main supporting characters, but they’re not as fleshed out as you may like. They don’t exist in that perfect realm of doing enough to support their friends while still being individuals. Or being established enough to be satisfied with their character development.

Scotty, for example, doesn’t present us much beyond him being the fun guy of the group. He streaks at school events, makes out with girls at parties, and wants to live on a houseboat because, why not? And don’t get us wrong, it is made clear that he does have some form of intelligence, especially regarding calling out Clare trying to lessen the seriousness of her final date with Aiden. But he doesn’t seem fleshed out to the point he should be.

Then with Stella, she is the type of character you wish they gave you more of because you can see her potential was undercut. She is a queer Black woman who even jokes around with Aidan and calls him her light-skinned king, which feels like the rare intra-cultural joke for a movie like this. On top of that, she is shy, a theater nerd, and all that she is, it almost feels too unique. I’d even say it may distract you because her bubbling storyline being caged by being Clare’s Black best friend almost feels insulting.

In the end, Clare and Aidan do end up breaking up. Clare goes to Dartmouth, and while it isn’t confirmed if she gets a college boyfriend, she does seem to enjoy school and keep steady on the plan she set for herself. As for Aidan? Rather than go to college and be pre-med and try to work things out with Clare, since his school would be close to her, he pursues music full-time.

Note: He doesn’t at Berkley, as he bombed his audition, but he goes to LA, becomes a roadie, performs at local shops, and puts his music online for people to hear. And it is through his online presence that Aidan and Clare reconnect, and the movie ends with them meeting face to face after one or two college semesters.

Absolutely. The way “Hello, Goodbye, and Everything In Between” ends pushes that there is potentially more to this story. There can be Aidan and Clare trying to be friends, despite having a long relationship, considering their ages. Heck, Aidan could become big, pursue other girls, and fall in love, and Clare the same. Making it so, between being happy for one another, or getting back together later in life, a lot could happen.

Hello, Goodbye, and Everything In Between (2022) – Review/ Summary (with Spoilers)
Overall
“Hello, Goodbye, and Everything in Between” is a cute film that can stir up your emotions. However, like a lot of teen romance media, while you have to love the shifts made to make women a more active role, at the same time, you’re still left looking for something different and new. Which, with Stella there, as much as she isn’t a big-time character, she is seen enough to almost be distracting and make you wish we didn’t just get an equal female lead, but one whose story doesn’t feel like an expanded version of one well known.
Highlights
How It Ends
Aidan and Clare’s Chemistry & Them Being Equals
Disputable
Scotty and Stella
It Speeds Through Nearly 10 Months Of Their Relationship
82
Subscribe to our mailing list Follow Wherever I Look on Twitter and Instagram, Like us on Facebook, and Subscribe to the YouTube Channel.