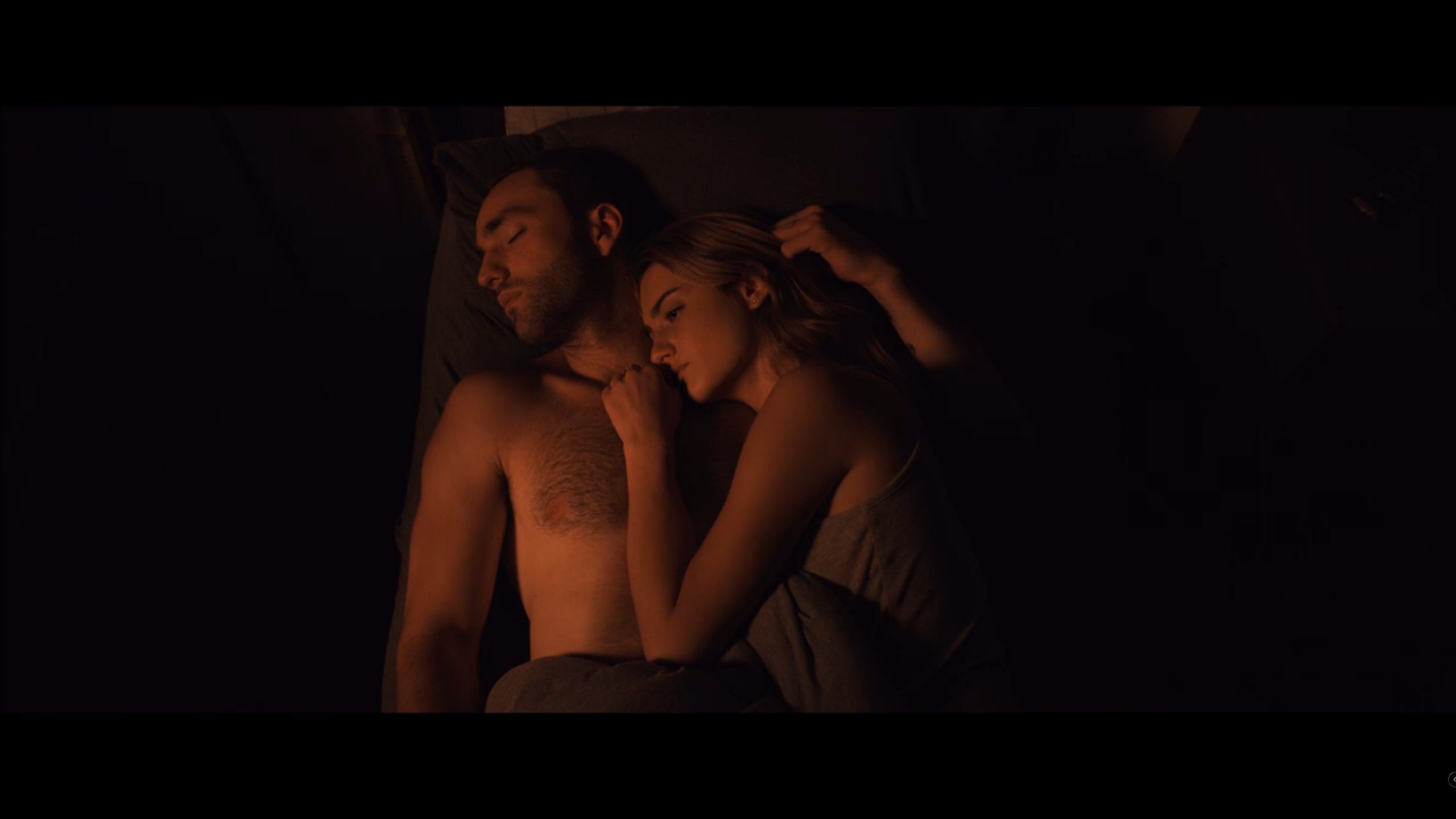 "The perfect representation of Stephen and Lucy's relationship. Him looking elsewhere with a tight grip on her," Tell Me Lies, "Take Off Your Pants and Jacket," directed by Sam Boyd, 2022, (Hulu)

“Tell Me Lies” may appear to be another young adult drama, but as it explores the interpersonal relationships between the core friend group and some of their families, it breaks away from its peers.

“Tell Me Lies” is split between June 2015, when Evan and Bree are getting married, and when the majority of the season takes place, between the fall of 2007 and spring 2008 school term at Baird College. There we meet Lucy, Pippa, Bree, and Macy, who are part of the freshman class, as well as Evan, Wrigley, and Stephen, who are juniors.

Lucy, who just broke up with her boyfriend, wasn’t necessarily looking for a new one when she became hooked on Stephen, who was on again and off again with his long-term girlfriend and fellow junior, Diana. As for Pippa? Within welcome week she was attached at the hip to star football player Wrigley and Evan? While he isn’t Bree’s first, he does end up her last in a literal sense.

But, despite how simple things could have been, they weren’t. Stephen tries to keep both Diana and Lucy on the hook, which shows why his home life is so bad, for that is where karma kicks him in the ass. Pippa, like Bree, isn’t very vocal about her past, for a good reason, and Evan? With being the son of a man touted as a genius, he struggles with how to live up to the precedent. Oh, and as for Wrigley? While he is introduced as a happy-go-lucky guy, thanks to his little brother Drew, drugs and alcohol go from something he does for fun to what he needs to cope.

Together and apart, we see this group hook up, deal with tragedies and drama, and in the case of Lucy, actually, see them in class trying to learn something.

For the majority of the characters, while they don’t begin well fleshed out, by the end of the season, Pippa, Wrigley, Stephen, Evan, and Bree, to some degree, have their moment in the sun, and it allows them to become more than Lucy’s friend, or boyfriend in the case of Stephen. Bree talking about being a foster kid, how she enhances Evan’s episode, and just how she is lowkey but at the same time clearly the most attractive of her group, was wonderfully done.

Pippa, who is the last one to get an episode focused on her development, has hers perfectly placed. Yes, because she portrays herself as so chill, and Wrigley paints her as something wild, she is likely one of the first of Lucy’s group you want to see focused on. But things click as it is revealed she was bullied and how she reinvented herself in Wrigley’s image of the perfect girlfriend. Especially as she has a moment with Charlie that leads you to wonder, has she not only been lying to others but herself?

And I could go on and talk about Stephen going home in episode 5 and seeing his relationship with his mom Nora, a narcissist who loves emotional manipulation. Also, there is Wrigley having a learning disability, Evan’s birthday blow-up, and honestly, the only person who doesn’t get an episode is Diana, which with how season 1 ends? Oh, she better be the first one to be focused on in season 2.

While The Sex Scenes Are Tame, They’re Better Than Most

One prime example is Lucy and Stephen’s situation in episode 9, where he takes an interest in hearing how she had sex with another man and is pleasuring her while listening. It’s an odd cuck of a moment but also a bit unexpected, considering Stephen’s jealousy streak.

While Stephen is either cheating on Diana or treating her terribly while wrapped around Lucy’s finger, you can’t deny the intimacy difference between Lucy and Stephen v. Diana and Stephen. With Lucy, you can see they both enable the worst in each other. Sometimes in a good way, like how Stephen allows Lucy to be numb and cold regarding Macy dying early in the season, considering she only knew her for a week.

Yet, while they never got toxic to the point of physical abuse, as Lucy started to demand more from Stephen, it didn’t come naturally for him to rise to the occasion. If anything, it seemed like the dominance, the feeling he was being manipulated, was a kink. Like it reminded him of how Nora was, and it got him off a little bit.

But with Diana, you can see a stark difference. Stephen only appeared vulnerable enough to appeal to Lucy and win her back. With Diana, he willingly would talk about his failures and his relationship with his mom, and you could see he actually loved her. It’s just that he got tired of fighting with her to maintain this sense of perfection. Hence, he cheated, brought up someone she was with before him, and did whatever it took so that he didn’t have to feel lesser. Even though, as shown with Lucy, a freshman who he perhaps thought he could dominate with having more money, sexual prowess, and other things, no matter what, Stephen isn’t capable of being the alpha he sees himself as.

At first, Charlie admittedly seemed like a token. She was the first queer character introduced, the first unambiguous Black woman to sort of join the friend group, via being Lucy’s roommate, and one of the few, Black women who had a speaking role. However, as noted, Charlie and Pippa’s friendship that develops in episode 8 turns things around. Not just because they make out and Charlie eats Pippa out, but because she is the first one to see through Pippa’s façade.

At that point in the show, it becomes clear that while Lucy, Bree, and Pippa say they are friends, it is superficially since, as they got paired off, the friendship became an afterthought. So for Charlie to see Pippa so clearly, and seem to like her despite of, you can see that is what Pippa wanted. For being the freak Wrigley liked, the chill girl amongst Lucy and the others, she could play the role, but all actors grow tired of playing a character eventually.

Sweeping Evan Sleeping With Lucy Under The Rug

I feel that Evan taking advantage of the events in the finale to sleep with Lucy, who he made clear, before Bree, that he liked, was trash. For one, he slept with Lucy while dating Bree. Two, Lucy was reeling from something happening, and likely drunk as hell. Lastly, it pushes the idea that Evan is a predator, but one not as obvious as Stephen tried to be.

Lucy’s Development Over The Season

At first, Grace Van Patten seems to be the indisputable star due to having the highest profile, the charm, and everything expected of a lead character. However, as you grow tired of her and Stephen going back and forth, as there is lukewarm development regarding her issues with her mom, CJ, while you still may adore what Van Patten brings to the show, Lucy seems overexploited.

What we mean by that is, similar to Margaret Qualley in “Stars At Noon,” there is no denying what Grace Van Patten brings, but you can see there is some attempt to use her as a crutch. But, unlike “Stars At Noon,” the supporting cast is rather interesting. So to almost experience Lucy being shoved down our throats, including her toxic-ass relationship with Stephen? Never mind the domino effect of drama she is part of? Eventually, you just sigh and roll your eyes while still, lowkey, wanting more.

Mind you, not of her in class because, like her relationship with her mom, her burgeoning writing career feels like a meager attempt to avoid criticism that Lucy got swallowed into Stephen’s world. But, you do have to appreciate that the people behind “Tell Me Lies” saw what Van Patten was capable of, and even though it wasn’t necessary, made it so, if the supporting actors couldn’t bring it, at least Van Patten had more than enough time to potentially shine to compensate.

Tell Me Lies: Season 1 – Summary/ Review (with Spoilers)
Overall
"Tell Me Lies" has all that is needed to be a hit for Hulu. Young adult drama in the form of sex, death, betrayals, secrets, and more. All while not feeling like something you've seen a million times over, thanks to building up its supporting cast in a way that made it feel they were easing them on you, rather than forcing you to potentially like them.
Community Rating0 Votes
0
Highlights
Charlie
Diana and Stephen's Relationship
While The Sex Scenes Are Tame, They're Better Than Most
Well-Developed Supporting Characters
Disputable
Lucy's Development Over The Season
Sweeping Evan Sleeping With Lucy Under The Rug
83
Subscribe to our mailing list Follow Wherever I Look on Twitter and Instagram, Like us on Facebook, and Subscribe to the YouTube Channel.