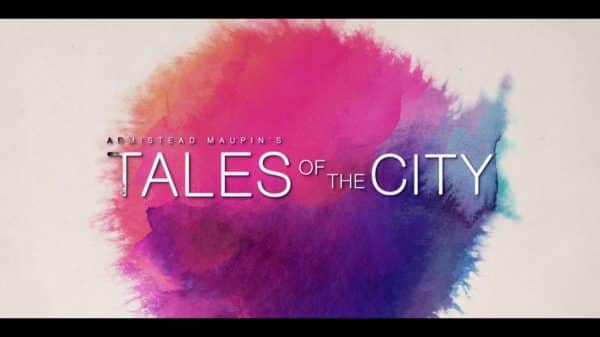 Just in time for Pride, we get a large ensemble cast depicting nearly every bit of the rainbow from orientation, gender identity, and also ethnicity.

Where to begin? Perhaps the best place would be to note that a matriarch of sorts, Anna (Olympia Dukakis) is having her 90th birthday and that draws many members of the neighborhood to her yard. People who either play with gender, are trans, queer, or are simply eccentric. All of them love Anna and treat her almost like a revered figure. She even has the power to draw Mary Ann (Laura Linney) away from Connecticut and to return to San Francisco after 23 years. Now, why did she leave? Well, apparently career options.

Now, as for who, or what, she left behind? Well, outside of Anna, of course, there was Michael (Murray Bartlett), a man who is like a brother to her and is now dating a much younger man named Ben (Charlie Barnett). Also, she left behind Brian (Paul Gross) and their, Brian and Mary Ann’s, adopted daughter Shawna (Ellen Page). Someone who doesn’t know they are adopted, and also hasn’t forgiven Mary Ann from disappearing from her life when she was 2. Yet, rather than express it, she suppresses it.

Outside of that circle, we also have Jake (Garcia), an FTM trans person, who looks to Anna for advice since she is MTF, their girlfriend Margot (May Hong), who is having issues with Jake’s transformation it seems, and a few others. However, rather than run down every last person seen, we’ll end things with the twins Jonathan (Christopher Larkin), who changes his name to Raven, and his fraternal sister Jen (Ashley Park), who has changed their name to Ani. Why? Well, with them being two months behind on rent, and holding BFAs in fine arts, desperate times call for desperate measures for who knows how much time Anna may give them.

We must allow room for people to surprise us.
— Anna

Since the end of Sense8, while shows like One Day At A Time, among others, have had queer, non-binary, and more characters, they were part of an ensemble. So while they had storylines, they weren’t the star. In Tales of the City, it is all queer all the time. Anna is a trans woman, most of the characters, outside of Brian, Mary Ann, and her estranged husband, Robert (Michael Park), are part of the LGBTQIA+ spectrum. And it isn’t like they all look the same either. Michael is an older man, and Anna just turned 90. While there are no south Asian characters currently, we have three east Asian (is that the right term?) characters. Of which, when it comes to the twins, Raven and Ani, it isn’t clear what they are, but they fit in so well you honestly don’t care.

And the beauty of this all is, with the majority being of the community, it makes their presence seem like it won’t be a huge deal past the first episode. For while Jake is still adjusting, and Anna is acting as a mentor, outside of that, no one seems really defined by their gender or orientation. They have so many bigger things to deal with or worry about.

It Has Drama, But It Isn’t Over The Top

Okay, the main drama is the Mary Ann, Brian, and Shawna situation – since Shawna doesn’t know she is adopted. However, then you add in Mary Ann and Robert likely on the way to divorce. On top of that, there is Jake and Margot, since Margot seems to be happy Jake is passing, but not like being seen as a straight woman. Also, someone sends a strange, and meanspirited, card to Anna, which we have to learn about.

And while those can get heavy, we got some light stuff too. The twins having identity issues can be fun, alongside Shawna’s boss, whose name isn’t said, being a campy drag queen who owns a bar. Also, Michael and Ben may have an age difference, but they seem like a stable couple who shouldn’t go through any drama. So we should get some cute romantic moments from them to offset the many relationships which are about to go through hell.

It Makes An Hour Feel Like A Long Time

I’m not going to lie, I couldn’t get through the premiere in one sitting. For while we have all these distinct personalities, all with a storyline that are ready to speed off, there is something about the pacing. If not Mary Ann who, in the grand scheme of things, comes off far too boring to be one of the main people we focus on. Often it seems like she is drowning and overexposed compared to the many far more compelling characters. Making it where, if you couldn’t pause, her scenes would be the ones you run to the bathroom real quick or make a snack.

Which isn’t to say she, as she engages with Shawna more, can’t become less of a liability. It’s just, between her, Brian, and Robert, and their issues, they keep playing with the brakes on this show and it gets tiresome.

Despite Mary Ann possibly becoming a liability, in the long run, outside of her there isn’t anything not to like, or potentially love. We have diversity on multiple levels, storylines for nearly every character that could enrapture you, and there is a good mix of drama, comedy, and both romance on the way to its end and that’s blossoming. Hence the positive label for with June being Pride Month, Tale of the City just has good timing. It presents facets of being LGBTQIA+ not focused on to this degree, and similar to Pose, it makes those not part of the community in a place those in the community often find their stories.

Well, outside of Mary Ann, unfortunately.