In its second season Motherland: Fort Salem seems overwhelmed by what it can say, do and show, to the point it barely succeeds in what it does do right.

While War College was one of the major goals of season 1, with the Camarilla becoming notable towards the end, the second season creates multiple issues for the Bellweather Unit to worry about. Surprisingly, the thing they need worry about the least is War College as we barely see them in class beyond episode 2. Now, why is that? Well, because each member of the Bellweather Unit, and their associates, have much bigger things to deal with.

Abigail, for example, is being pressured to find someone to have a child with, since the Bellweather family needs to increase their numbers. Tally, though a biddy at the end of the first season, that is quickly undone but in the process, she sees memories which lead her to question General Adler’s decisions during her 300+ term as general. Then, regarding Raelle? Well, between being experimented on, becoming a shining symbol for the future of witch power, alongside dealing with her mother and girlfriend being part of the Spree? She has a lot on her plate.

Though, as viewers of the first season know, the world doesn’t revolve around the Bellweather unit. Anacostia decides to use Scylla to go undercover and investigate a Camarilla cell. Petra, in trying to keep her word to her mother, seeks a way to usurp General Adler, and as Adler deals with Petra and Tally testing her, she is trying to keep Khalida from leaving and dealing with the rise of the Witch Plague – a tool used by the Camarilla.

So, needless to say, there was a lot going on in season 2.

The Downfall of General Adler In season 1, it was made clear General Adler faced a multitude of threats to her continued role as General of the United States’ Witch Army, alongside her prominence amongst the member states of The Hague. However, in this season, watching Tally unravel the secrets General Adler has held, combined with Petra, once again, coordinating with President Wade to end General Adler’s term was notable. For when it came to Tally, who was enamored by General Adler for so long, the loss of that naivety was something else. Granted, her becoming disillusioned wasn’t heartbreaking, as much as it was her starting to realize what she signed up for and under who, but the progression was still quality acting.

As for Petra? With meeting her mother, Minerva, and hearing that disappointment that Petra didn’t rise to the position she claimed she would, it furthered your understanding of the Bellweather family. One which, with constant Camarilla attacks, is by no means broken but reliant on a few to continue the legacy of many. And while General Adler raised their position in the world, if slavery existed in the world of Motherland: Fort Salem, one could submit all she did was put all Bellweathers under one master vs. having them potentially spread around.

So Petra taking advantage of a Black woman as president and even taking Anacostia under her wing to usurp General Adler has racial undertones not touched upon but definitely made General Adler’s fall all the more notable. When it comes to Motherland: Fort Salem, it hasn’t done well in establishing focal points for its villains. The Spree and Camarilla generally worked best when it was one of many, led by the unknown. However, season 2 changes that by giving us a leader, and while the Camarilla faltered, The Spree excelled. Mind you, Nicte had the benefit of being similar to Tally before she rebelled against General Adler, but a good origin story and diabolical actions don’t set a character for a show’s run.

Thankfully, Aguayo-Stewart brings a certain level of intrigue beyond the backstory given through her interactions with Tally, alongside a presence akin to Adler due to how notable she is, but with a different energy. When it comes to General Adler, it is the stern figure with a 300+ year military career that gets you. With Nicte, she has an almost Disney villain vibe where, even if you aren’t meant to root for her, you can not deny she is iconic.

Which makes the idea of the Bellweather unit on the run, with Nicte and her likely presenting the world as The Spree see it and teaching them Off-Canon magic? Oh, if season 3 is the last season, it will certainly be next level.

Further Building Up The Culture

Between Raelle and Abigail, we got to dive deeper into the Cession and the expectations of military personnel. With Raelle, we get to see witches who live life beyond what the military and government desires, which is a rare sight, and meet people who helped raise her. Then, with Abigail, we explored how, despite witches, the military, and the government mainly being ran by women, in a matriarchal society almost, patriarchal values still peeked its head. If it wasn’t Abigail’s uterus being touted as the most valuable thing about her, it was re-establishing how much the world as built by General Adler was just a gender swap of what we know.

What May Come Ahead 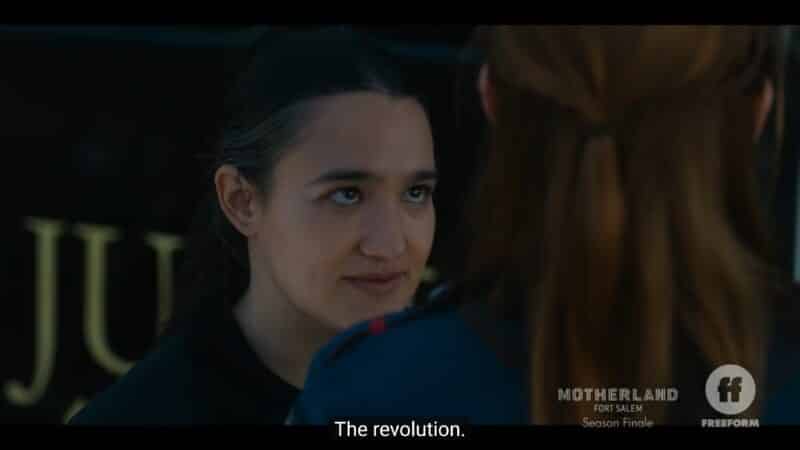 While we know of the Spree and learn of the Esterbrook Witches who rebelled against conscription and the military, for the new General to do so and have some of the most prominent cadets on the run, to avoid a murder charge, that’s next level. It means season 3 will have to drastically alter what we’ve seen before and mean new things for the world of Motherland: Fort Salem. Heck, maybe not just the end of the Camarilla, but conscription and the way witches have lived beyond the Cession.

Generally speaking, most, if not all, male roles on Motherland: Fort Salem are tepid and forgettable. Even Adil, who gets to shine by showing us the power of Tarim witches, remains a bit stale. However, while that is forgivable for guys playing the love interest, with the show making men the leading villains, them being bland like Alban Hearst and his associates? It’s terrible.

Then, to add onto it, the show has the Camarilla go after children for a good portion of the season, with it being proposed to stone on to death during a party. This does create a sense of shock and make them seem evil, but considering they have the Witch Plague, going after children seemed like a strange decision. Especially after eliminating members of The Hague, The Spree, and ending the season with them attacking Fort Salem. 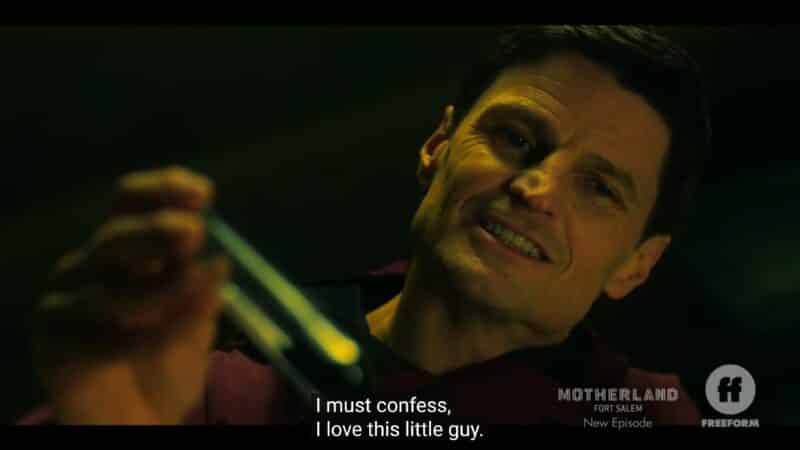 But, overall, I think while The Camarilla, like The Spree, are formidable as organizations, it’s those who represent the Camarilla that ultimately made it seem less than.

Not Getting More Out Of War College

Did we get Harry Potter vibes as we met the various war college professors? Yes, and considering how bold their personalities were, even one of the male teachers, it made us crave more! Add in M and the Sekhmet/ Coven the Bellweather unit joined? We could have seen and experienced so much, and considering how War College was built up into a big thing in season 1, getting teased was frustrating.

Like War College, the Mycelium was built up to be this big thing, but it kind of fizzled out. Yes, the Witch Bomb was notable, and learning it is a network of consciousness and magic of witches who fell in the fight against the Camarilla. However, like many shows with ten hour-long episodes, it seems as ambitious as the show wanted to be, there was never enough time to give every idea, story, or thing its due. Which left the Mycelium a notable new thing, but not as big as it wanted to be.

While season 2 of Motherland: Fort Salem has many things worth highlighting, unfortunately, a lot of what was built up in season 1 is either discarded, downplayed or outright disappointing. So as much as season 3 being the show’s last is disappointing for many, maybe it may give the incentive for course correction the show needs to end on a high note. Motherland: Fort Salem: Season 2 – Review/ Summary (with Spoilers)
Who Is This For?
Fans of the first season who wanted a bit more action, less focus on the schooling witches go through, and wanted more insight into the villains the army faces.
Highlights
The Downfall of General Adler
Nicte
Further Building Up The Culture
What May Come Ahead
Disputable
The Camarilla
Not Getting More Out Of War College
The Mycelium
78