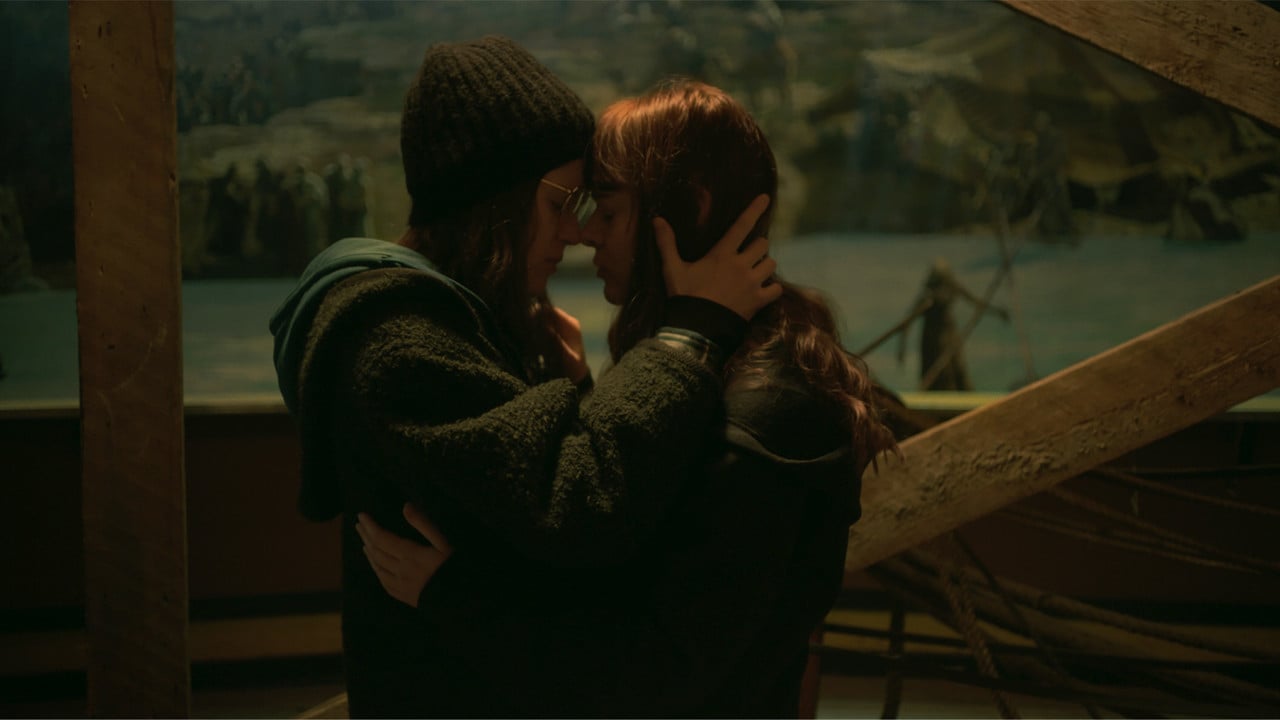 In “You Can Live Forever,” faith conflicts with sexuality as a Jehovah’s Witness girl falls for another girl who is by no means questioning their sexuality.

Table of Contents show
1 Film Summary
2 Things To Note
3 Character Descriptions
3.1 Jaime
3.2 Beth
3.3 Marike
4 Review
4.1 Highlights
4.1.1 Jaime and Marike’s Relationship
4.1.2 While Being A Jehovah’s Witness Is Treated As Foreign, You Get Enough Of It To Understand Why People Are Drawn To The Faith
4.2 Movie Directory
4.2.1 On The Radar
4.2.2 Ratings
4.2.3 Special Categories/ Tags

In 1992, Jaime, after her father’s death, finds herself temporarily living with her aunt Beth and her partner. In the beginning, this is fine, for Jaime’s mom is dealing with the shock of losing Jaime’s dad, and Jaime gets it. However, with Beth and her partner being Jehovah’s Witnesses and expecting Jaime to be part of their community for as long as she stays, that complicates things.

However, putting on a dress and going to boring services is one thing. What makes things hard is a girl named Marike falling for Jaime and struggling under the weight of conservative values while wanting Jaime close. Thus leading to Jaime trying to be understanding of Marike’s situation. Especially considering Beth and Marike’s community isn’t above excommunicating someone who threatens their version of “The Truth” and could tempt their people with worldliness.

Teenaged Jaime is just trying to deal with all that is going on in her life. Her dad died suddenly, and her mom had a bit of a breakdown, so she is now trying to give her mother the time needed to get herself together by being with her aunt. Which is fine. Yes, Jaime is gay and has been for some time, but there is nothing about her aunt that feels unsafe or threatening beyond her aunt’s faith in which the men seem to exert a little too much control.

Beth is Jaime’s aunt who is married to someone whose social status is rising in their church, and this leads to a bit of a balancing act between being who her niece needs yet maintaining the lifestyle she and her partner have made for themselves.

What begins as just a girl trying to welcome another to the community blossoms into Marike finding someone who she falls in love with. But as her faith and feelings for Jaime clash, she is left wondering is there a way to have it all?

One of the burdens nearly all LGBT+ relationships have in media is whether or not it will be a traumatic romance. Sadly, before wondering what the first kiss will be like, how one may confess to the other, there is the question of whether the characters will be able to even enjoy the courtship phase? When they do fall in love, will their relationship exist with a constant threat from some third party? In some ways, “You Can Live Forever” has that issue, but it doesn’t have it become as heavy-handed as we see in other films with homosexuality clashing with religious values.

In “You Can Live Forever,” while it is clear that being a Joehovah’s Witness and being gay is not acceptable, Marike’s faith isn’t used to damn her religion, but it shows the complication many who are of a conservative faith have with other aspects of their lives. You can see Marike truly believes “The Truth” is the word of God, and when she goes to spread the good news, she is not performing. But at the same time, she cannot deny her feelings towards Jaime.

Hence, when she can, she brushes her fingers against Jaime. She uses any opportunity to have a sleepover to cuddle. Then, when she convinces Jaime to go out with her and deliver pamphlets and go door to door, the trips act as a means to get Jaime to see Marike’s world and day trip dates. All of which give you butterflies feeling since, even if Marike sometimes comes off hot and cold, you know it is only because ex-communication is possible. But when she lets go and is just enjoying being with Jaime, you can feel second-hand bliss.

While Being A Jehovah’s Witness Is Treated As Foreign, You Get Enough Of It To Understand Why People Are Drawn To The Faith

It would be quite easy to villainize Marike’s faith and the way it pushes her family, and Jaime’s, to act against them. After all, what keeps Marike from living her truth, even if it is 1992, is her religion. However, rather than focusing on damning the Jehovah’s Witness faith and making it out to be the bad guy, with the families acting as the minions, there is a fair handshake.

When it comes to Marike’s faith, it shows the other side of things as well. We see how it brings people a sense of community and purpose, and yes, it is steeped in patriarchy, and the men get catty. However, those who the teachings and limits work for are in bliss. So while not a perfectly balanced take, there is enough here so that it doesn’t feel like it is utterly bashing the religion.

You Can Live Forever (2022) – Review/ Summary (with Spoilers)
Overall
While “You Can Live Forever” is yet another reminder of how difficult being queer can be, in terms of finding love, it avoids being too downtrodden and allows you to experience joy watching Jaime and Marike fall in love. Even if there is the question of whether or not it will last.
Highlights
While Being A Jehovah’s Witness Is Treated As Foreign, You Get Enough Of It To Understand Why People Are Drawn To The Faith
Jaime and Marike’s Relationship
Disputable
81
Follow Wherever I Look on Twitter and Instagram, Like us on Facebook, and Subscribe to the YouTube Channel.