Wherever I Look
Recaps, Reviews, and So Much More
Home Movies Soul – Review/Summary (with Spoilers)
Movies

Like most Pixar films, Soul bridges what is expected from animated films aimed at children and the type of stories that can bring adults to tears.

Joe has spent his life trying to be like his dad and be a musician, a jazz pianist, to be specific. However, it seemed just as he was about to reach the dream, something happened. Now middle-aged, single, no kids, Joe gets by working as a band teacher and doesn’t seem to love the job, even though it has its silver lining when he can at least reach one kid in his class.

For example, one kid he used to work with, Lamont “Curley” Baker, was inspired by Joe’s teaching. This led to him learning music from Joe and not only having a reason to go to school and graduate but join a band. One that he invites Joe to play in, so it seems Joe’s dream might come true – but then he dies.

Thus leading to Joe fighting for a chance to return to his life and you left wondering how he may do so and, with the help of this soul named 22, whether he may accept death or take the journey he goes as a sign he wasn’t truly living.

We’re in the business of inspiration, but it’s not often we find ourselves inspired.
— Jerry Music wasn’t necessarily something Joe always loved. However, after his dad took him to a jazz club, that jazz piano has been his spark, his passion, and he has long dreamed of being a professional musician. However, fate didn’t have that in mind for Joe, so the closest thing he has gotten to getting paid to play music is by being a music teacher. A job he loves, but he sometimes feels is a settlement for the career always out of his grasp.

For as long as 22 has existed, they have resisted going to Earth. Nothing about it appealed to them, and no matter who was tasked with mentoring them, including multitudes of people who changed the human world, none of them could sway 22. However, Joe might be different without even trying.

Lamont was one of Joe’s students years ago who he had quite the effect on. In fact, Lamont credits Joe for getting him to commit to going to school and his current career in music.

Jerry represents those who live in the land before souls become human and act as counselors who guide baby souls through the process of getting ready for Earth.

Joe’s barber is a veteran who switched from his original dream of being a vet to becoming a barber.

An eccentric man whose spirituality and connection to the astral plane allows him to be an unofficial savior to lost souls, with no one of the land of the before bothering him.

Every time We See 22 Interact With A Famous Figure

I can’t speak what will be funny for kids, but what was funny as an adult is meeting all the inspirational people 22 met that were supposed to help her find her spark and failed. Be it Mother Theresa, Muhammad Ali, Carl Jung, and so many others, watching them give up on 22 is made into hilarious moments.

Mind you, the kind which gets flipped later on, but there is a good message in terms of exposing people to what you know, and recognizing what sparks your interest doesn’t necessarily have to be your purpose. It’s like, with this blog or website, I love to do it, but it doesn’t necessarily mean it is what I was meant to do. Running Wherever I Look is just what I enjoy.

With that in mind, we have to mention the barbershop scene when 22 is in Joe’s body. During that, Dez, Joe’s usual barber, is asked about himself, and he talks about his journey from the military to wanting to be a vet to becoming a barber. Through him and 22, you come to realize how limiting some of us dream.

To word that differently, we focus so much on this specific result we want, be it money, what we think has value in society, that we forget the core driver. Be it wanting to help people, meet different personalities, getting to tinker with things and make them work or better, or even something more general than that.

I guess what I’m trying to say is that we get so lost in becoming something and so specific on the dream that we forget how vivid and colorful dreams are. And in focusing on just one particular part of the dream, we turn a multicolor vision into a black and white picture that we try to replicate rather than see as just a moment part of a much bigger picture.

How It Talks About Finding Your Purpose

Soul can be summarized as a film that focuses on what fulfills your soul. Also, how you can easily lose yourself in pursuit of something in both good and bad ways. For losing yourself in a moment, just living, that takes your soul to new heights. However, obsession over something, allowing yourself into an unhealthy routine, then you lose yourself in ways that eventually drain you and make you lost.

In many ways, as cute as the characters are and the jokes, Soul can feel like a wake-up call for viewers. This is especially true for those who aren’t sure why they are here and feel that people are drowning out their voice with their negativity. Yet, even when staring at defeat or when you think you are no longer passionate, there is a reminder that be it a voice inside or from someone who believed in you, there is always something there that can and will push you to keep going. You just have to listen.

Wondering Who Lisa Is

So, minor thing, the way the film is, Joe doesn’t have a girlfriend, seems to have had a lonely life, beyond spending time with his barber, his mother, and his mother’s friends. But, there was this woman named Lisa. Now, who she is, what she looks like, what happened? That isn’t gone into. She exists, but we’re not allowed to personally know her, which leaves her a storyline that feels untouched.

Not to be corny but, Soul is soul-stirring. For while, like most Pixar films, there is a lot of cutesy characters and stuff going on, the deeper themes hit you hard. It makes you question your life, what kind of voice you are in someone else’s head, and whether a person’s purpose is just one thing, and if because something sparks you, does that mean that’s what you are meant to do?

Hence the positive label and recommendation. Soul both entertains you and gets you thinking. This isn’t a common thing movies can do, as usually they only succeed at one more than the other. So definitely check it out on Disney+. 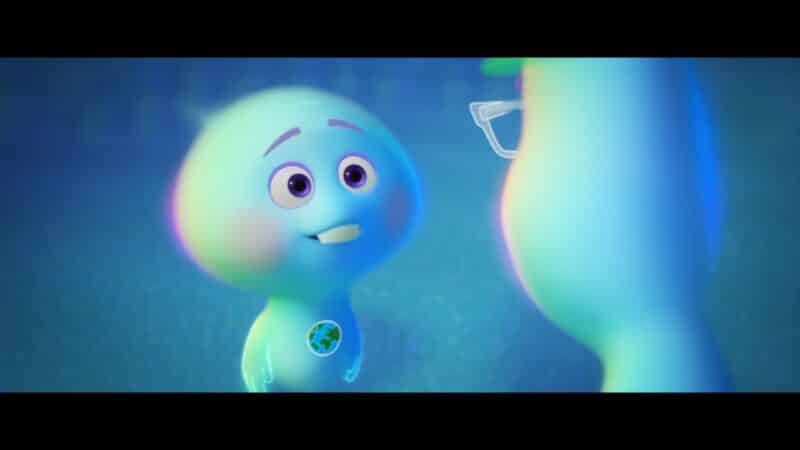 With the help of one of 22’s friends, Joe does get back to Earth but is stuck in a cat’s body while 22 is in his. But, with 22 living vicariously comes them learning that Earth isn’t as horrible as they have thought for hundreds, if not over 1000 years. However, upon being forced back into the spiritual world, Joe downplays 22’s progress and takes a lot of credit for what has now made her seem ready for Earth.

In fact, he sort of downplays her own specific adventure and experience and adds onto the negative voices of so many greats who made 22 feel that they aren’t ready or deserving to be human. Joe doesn’t realize this at first, for his focus is all about playing the piano and having himself a real gig. But when that gig doesn’t fulfill him as expected, he seeks out this eccentric man, Moonwind, who unofficially helps lost souls back to their bodies, to find 22 and not only apologize but truly push her to live.

Now, because Moonwind is both human and has an astral presence, this is done with ease, but convincing 22 to not be fearful and insecure is hard. However, eventually, Joe breaks through and breaks 22 open. Thus leading them to head to Earth, and after seeing all Joe has done, the people who run life before souls become human, the Jerrys, arrange for Joe to return back to Earth.

Does Soul Have Sequel Potential?

Yes! For one, we don’t know what came next for Joe. Did he end up with Lisa or seek her out? Also, who did 22 become? Who were they born to, and what did they become? This film easily could have a sequel following Joe, either admitting teaching is some form of purpose, alongside seeking fulfillment in something beyond music. Add in him reuniting with 22, who will have an actual name now, and you got a movie deserving of 90 minutes. Especially as both deal with new levels of uncertainty, questioning what they bring to the table, and much more.

How It Talks About Finding Your Purpose - 91%

Soul both entertains you and gets you thinking. This isn't a common thing movies can do, as usually they only succeed at one more than the other. So definitely check it out on Disney+.