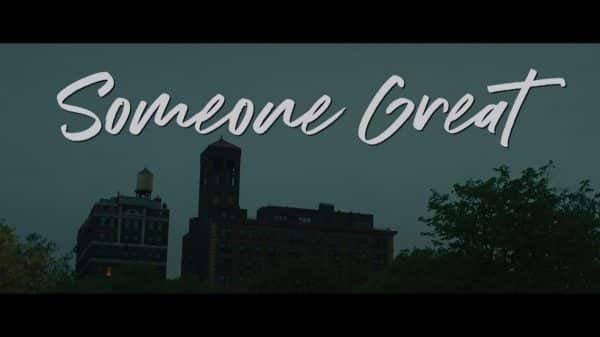 Only one of two things comes from watching Someone Great: Wanting to call your best friends and say you love them, or wishing you have best friends you could call.

Jenny is 29, just got a job with Rolling Stone in San Francisco, and has broken up with her boyfriend of 9 years. So to say her feelings are a bit all over the place – HUGE understatement. But, luckily, she has Erin and Blair by her side, her college friends who set aside the whole day to help Jenny deal. For getting closure from Nate, Jenny’s now ex, while he seems mature enough, it’s questionable if Jenny needs the fantasy of this is what I did, you did, so this is where we split.

Right now, Jenny just needs to drink and considering Blair is dealing with a quarter-life crisis, and Erin is dealing with commitment issues, all three could use a day of drinking, dancing, some drugs, and freedom!

When it doesn’t hurt anymore, that’s when it’s really over.
— Matt

Unfortunately, sometimes things don’t break, they shatter. But when you let the light in, shattered glass will glitter.
— Jenny

With artists like Big Freedia, Lil’ Kim, multiple uses of Lizzo and Jessie Reyez, Someone Great pushes you to want to find a Spotify playlist or get your own daily playlist together with the songs they have. And even in terms of breakup, I just want to drink and cry songs, like when Selena came on, it has a little bit of everything to take you through your wave of emotion.

Jenny’s Poem Towards The End

We only get a taste of Jenny’s writing talent, and it is through a poem, partly quoted above, when she is seeking solace. Now, whether you are breaking up, broken up, or just caught up in what Jenny is going through, that scene is probably the most emotional moment of the movie and feels like a sigh. A deep one, from the diaphragm, letting out all the dust and cobwebs of the soul so you can really start anew.

One of the best things about the friendship between Erin, Blair, and Jenny, is that it isn’t over the top. All things considered, it is an average friendship which seems real. One which, with everyone pushing thirty, is clearly on the verge of becoming strained yet you can see all parties involved are still invested. Blair, despite having a big presentation, allows herself to be dragged out and doesn’t flip out and bring it up for the rest of the movie. What seemed like Jenny being overdramatic is noted as serious, and she adapts accordingly.

Which isn’t to say things are all wine and montages. With knowing each other for over a decade comes criticism flying but never to the point of thinking anyone needs some deep and heartfelt apology. Like real friends, they can call each other out on their bulls*** without feeling the criticism is really an insult. Thus, even if Blair leaving her job like she did was a little out there, it roots most of the movie into some sense of normalcy.

You’d think with the film being about a breakup, that would mean Nate would be demonized and when Jenny’s former crush comes around, Matt, who is kind of a douche, he’d get the brunt of it. However, the men are allowed to be complicated, and while we don’t get the full spiel on their insecurities and what is holding them back from growing, you get just enough to see them as human. That they, for a multitude of reasons, aren’t representative of some emotionally stunted trope.

You May Wish It Went Further

Not so much when it comes to Jenny, since the point comes across well how she is dealing with 30 approaching. More so, when it comes to everyone else, you may wish you got more oomph. Take Erin’s issue with commitment – it is all broken down in one scene, and while you get it, the explanation gives us more so facts than emotions. Like a biologist explaining love does vs. a philosopher.

The same goes for Blair. While many of us see 30 as a major milestone, what Blair’s personal reasons are for that weren’t gone into. Religious reasons aren’t brought up, her parents, her aunts, or maybe a sibling having it together by 30 isn’t used as an example, so while you may feel the same pressure, what is Blair’s unique reasoning is absent altogether.

Lastly, there are the guys. Fully recognizing this movie is barely about them, they really are just love interest, it doesn’t take away from wishing they were fleshed out more. Like with Nate, besides being skinny, attractive, and having some interest in his community, who is he? Why did he think it was time to end things, did he have regrets on how it ended, and what of his relationship history made it so he decided it would be better to end things than try long distance? Did he miss being a ho?

Then with Matt, what made Blair attracted to him knowing Jenny had feelings for him at one time? Was it just because he wasn’t boring, like Will? Maybe she just wanted to have fun and the married by 30 thing trampled that internal desire? It isn’t clear nor what made him seem into Blair beyond sex. Unless their rendezvous had more to it than we got to see.

Someone Great Overall: Positive (Worth Seeing)

Like many Netflix movies, the focus is more so on crowd-pleasing than challenging thoughts and getting you in your emotions. Which isn’t to say, in the right or wrong mindset, you may not find yourself in your feelings. However, if watching this in a fairly good mood, while you’ll find Someone Great entertaining, it is also forgettable. For while it has a relatable story, it doesn’t reach those heights needed to be something you view over and over. It’s a one and done and there is nothing wrong with that.

Which may lead you to wonder why this is being labeled positive? Well, even if one and done, and likely forgotten within three months, it makes for a good way to lose yourself for an hour and a half. Also, while it may not go too deep into any character but Jenny, not be hilarious, or insightful, sometimes all you want to do is just watch a popcorn movie. After all, not everything needs to shake you to the core, make you hurt from laughter, and change your life. Some movies, like Someone Great, are just purely made to entertain and should be appreciated for doing such.