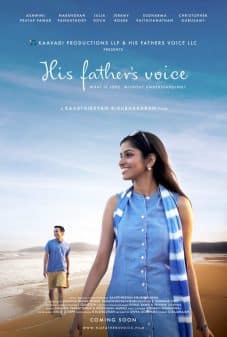 His Father’s Voice is the rare ode to the influence a father’s love has on a person, as well as the richness of Indian culture.

It has been over a decade since Kris (Skanda) was whisked away from Kaavadi, Tamilnadu, India. That was the place he grew up, met his best friend Valli, and fell in love with Bharatanatyam. However, while both of his parents, Clara and Jon, loved India, there came a point where Clara felt Jon loved India, its customs, and Kris’ teacher Parvathi more than her. Leading her to snatch him from Asia, and all he knew, including a father whose song was essential for him to dance.

Unfortunately, Indian culture, like most non-white cultures, require you going out of your way to learn anything about them. Making His Father’s Voice a film you need to see for while it doesn’t touch on every tradition and feel like a crash course, it gives enough to pique your interest. Be it learning about the dance style known as Bharatanatyam, seeing the last chapter of the epic Ramayana performed and interpreted in different ways, as well as being shown a small part of the rather large country. In many ways, while a film about a son who had a deep-rooted need to reconnect to his father, it also acts as a love story to India’s culture.

How Romance Is Handled

Like many Americans, romance to me is usually in obvious gestures like kissing, sex, and the innocent parts of it are simply part of a short prelude. However, whether speaking on Valli and Kris long term crush or Parvathi and Nagarajan, you get something different. Not something which can be seen watered down, tamed, or censored, but mature in a way. A different take on what it means to court, be in a long term relationship and express affection.

Take Parvathi speaking about her mother choosing Nagarajan for her and his response to that, much less having an honest moment when Nagarajan notes he was jealous of what Jon and Parvathi had. By no means is their love simplified and made into some ideal. There are levels of complications, but you can see they are rooted in their beliefs so as much as the mind may have swayed and worried, their feet were planted deep.

Then with Valli and Kris, whether we speak of them as kids or adults, we experience a bunch of little things which likely will trigger memories for you. Be it spending time with this person as a kid, likely not thinking of love or anything like that, but them leaving being one of the most painful things in your life. If not how much a longing glance and holding a person’s hand can mean. It’s moments like that which make you forget the more forward actions we’re used to for just watching them dance together shows more than the longest, sloppiest kiss.

The Importance of Knowing Who You Are

Comparing Valli and Kris, you see how much knowing who you are allows someone to grow and be who they are meant to be truly. Valli was raised by both her parents and that stability made it so she dances freely and without insecurity. However, with Kris being snatched from his father, and a culture he took on as his own, he couldn’t dance as he should. For while he had his mother, her parents as well for a time, it seems all she provided was academics and the ability to travel. And while roots are noted mostly to keep a person or plant in one place, roots are also how we get our nutrients. So as much as Clara gave Kris love, it is the mud baths, connecting with Valli, and Bharatanatyam that allowed Kris to grow. To truly begin his journey to become the man he not only could be but would be able to live the life of comfortably.

You May Sometimes Feel Overwhelmed By Details

This is not the kind of film where you feel you’re going down a one lane road with a bunch of billboards to distract you. If we aren’t learning about the different ways Ramayana can be interpreted, we’re learning the different visuals used in Bharatanatyam. Also, there is the disintegration of Clara and Jon’s marriage and the question of whether he had an affair. Not to mention Parvathi talking about her family, and us watching flashbacks of Kris and Valli as kids.

Which does provide a very rich story but like when you eat a pastry which is too rich in sugar, it can be a bit much.

His Father’s Voice is an experience. One which likely requires a second viewing to pick up and note all the cultural references you should follow up on. But, alongside the cultural aspects, there is the platonic, romantic, and paternal love which keeps a hold of your attention and locks you in. Hence the positive label. His Father’s Voice woos you and has you fall in love with not just the characters, but the culture they introduce you to. Almost making it seem the movie is an elaborate tourism video to get you invested in India and its culture.