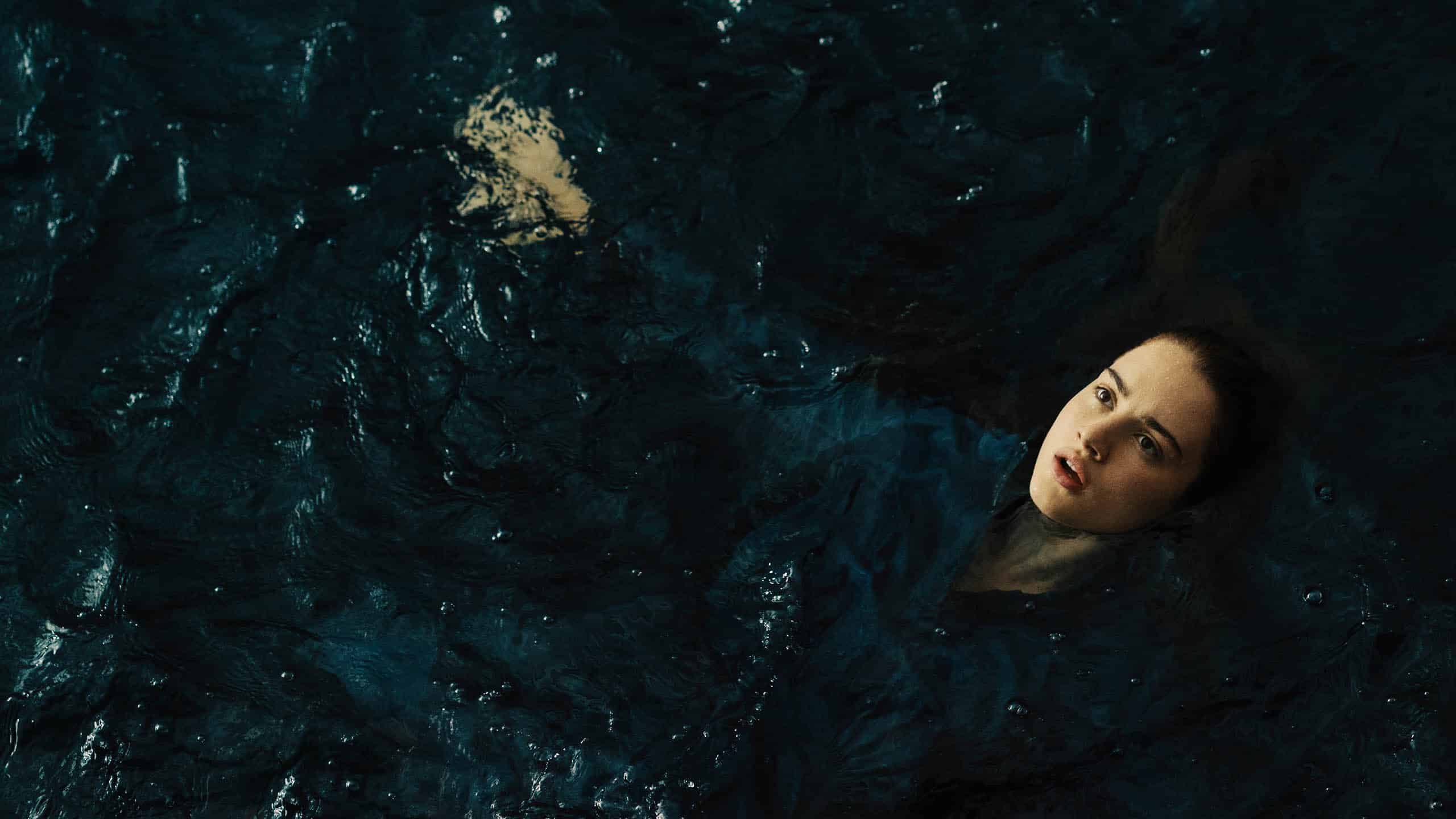 Grace Van Patten appears in Mayday by Karen Cinorre, an official selection of the U.S. Dramatic Competition at the 2021 Sundance Film Festival. Courtesy of Sundance Institute | photo by Tjaša Kalkan.

Mayday touches on the personal war one has within themselves and every single voice or person we see as holding us back – including our own.

In Ana’s former life, she was part of a wedding venue’s staff, and her boss was a menace. One who abused her in every which way seemingly possible, including sexually. So, when given a chance, she seeks an escape for her boss’ assault was the final straw. Leading her to crawl into an oven but, rather than die, end up in a whole new world. One in which the women were at war with men, and based off how few women have been dying, it seemed they were winning.

However, in time, Ana seems to realize the women weren’t truly winning any war but acting as sirens. Perhaps smothering and burying their issues rather than dealing with them. Leading to the question, for Ana, will she join them in this violent Neverland they cooked up or go back to reality and try to make it better than it was?

Things are not going well in Ana’s life at all. She is dealing with a series of setbacks, with a very thin silver lining, and while she needs her job badly, the abuse is too much. So whether or not Ana will break and just give up on life, or do what she needs to until a better day arrives, you have to watch Mayday to see.

Gert is somewhere between tough as nails or stubborn in Ana’s fantasy world and helps establish that once you forget your past, there is no escape from this world.

Bea is in the process of trying to forget what happened in her former life, but in her nightmares, what led to her considering ending her life still haunts her. Yet, despite this dark cloud over her head, she is one of the sweetest people Ana meets.

When Ana first meets a form of Marsha, it is at her job, in the form of a woman whose wedding day is partly ruined by rain, though considering she may not have wanted it at all, she asks of Ana to help her escape it. Yet, Ana isn’t able to do so, and thus that anger of feeling trapped, wanting freedom, especially from men, carried over into Ana’s Neverland.

Isolated due to not playing well with others, not much is known about June. She is one of the carryovers from Ana’s real life, but even at the wedding venue, June appears as someone who hands you a napkin or lotion in the woman’s bathroom, but not much more.

All That You Can Derive From It

In many ways, you can easily watch Mayday and see this as some dream world Ann came up with and left after what was comfortable felt foreign. However, you can dig deeper than that and get much more. Be it how the voices of Gert, Bea, Marsha, and June all represented a different voice in Ana’s head. That each man she killed or watched get killed, was someone who harmed her in life, and that, the women she saw, it was how she likely saw someone in her past. In Ana’s real life, Marsha was a bride trying to run from a marriage but ends up the strongest woman Ana knows in her Neverland. Why? Well, because she wanted to run and tried to do so.

Now, as for the other women, Gert, Bea, and June? Well, that’s harder to say. Yet, whether real or made up, each person pushed Ana further away from the shell of a person she once was and ultimately made her realize she has to face the storm that is her life head on and learn how to deal with the riptide.

The Lack of Character Development, And A Formidable Threat, May Lead You To Get Bored

When it comes to Mayday, the focus is more geared towards you extracting the messages than connecting with the characters. Hence why Ana’s story is not much more than in our character brief above. She is struggling with money, for reasons unknown, but the only thing made clear is it has gotten to the point where suicide is an option.

And the unfortunate thing is, she isn’t alone. Gert’s reason for being in Neverland isn’t clear, beyond her likely killing herself – which comes as a surprise due to the badass she is portrayed to be. Bea’s reason for being there is hinted at, yet also avoided, and June? June’s existence in this film barely registers. Heck, even with Marsha, and the way Goth plays her, you can see the anger, you can see the rage, but with you not knowing her husband and Marsha’s backstory either, you are left to make assumptions.

This, when paired with what Mayday wants you to focus on, makes the fact we only have one villainous male, who is barely formidable, not even named, feel like a long movie. For even with bullets flying, explosions, and a rather odd musical number, once you get the message or theme Mayday wants to convey, there isn’t much left to hold onto – even if you are a fan of any of the lead actresses.

While it is understood what Mayday is going for, with focusing more on the message than the characters, perhaps to make them generic enough to be in their shoes, something is lost. Be it your need to invest in anyone’s individual story, and thus the message which goes along with that, or the drive to think and feel as much as Mayday clearly wants you to.

The Lack of Character Development, And A Formidable Threat, May Lead You To Get Bored - 76%

While it is understood what Mayday is going for, with focusing more on the message than the characters, perhaps to make them generic enough to be in their shoes, something is lost. Be it your need to invest in anyone's individual story, and thus the message which goes along with that, or the drive to think and feel as much as Mayday clearly wants you to.