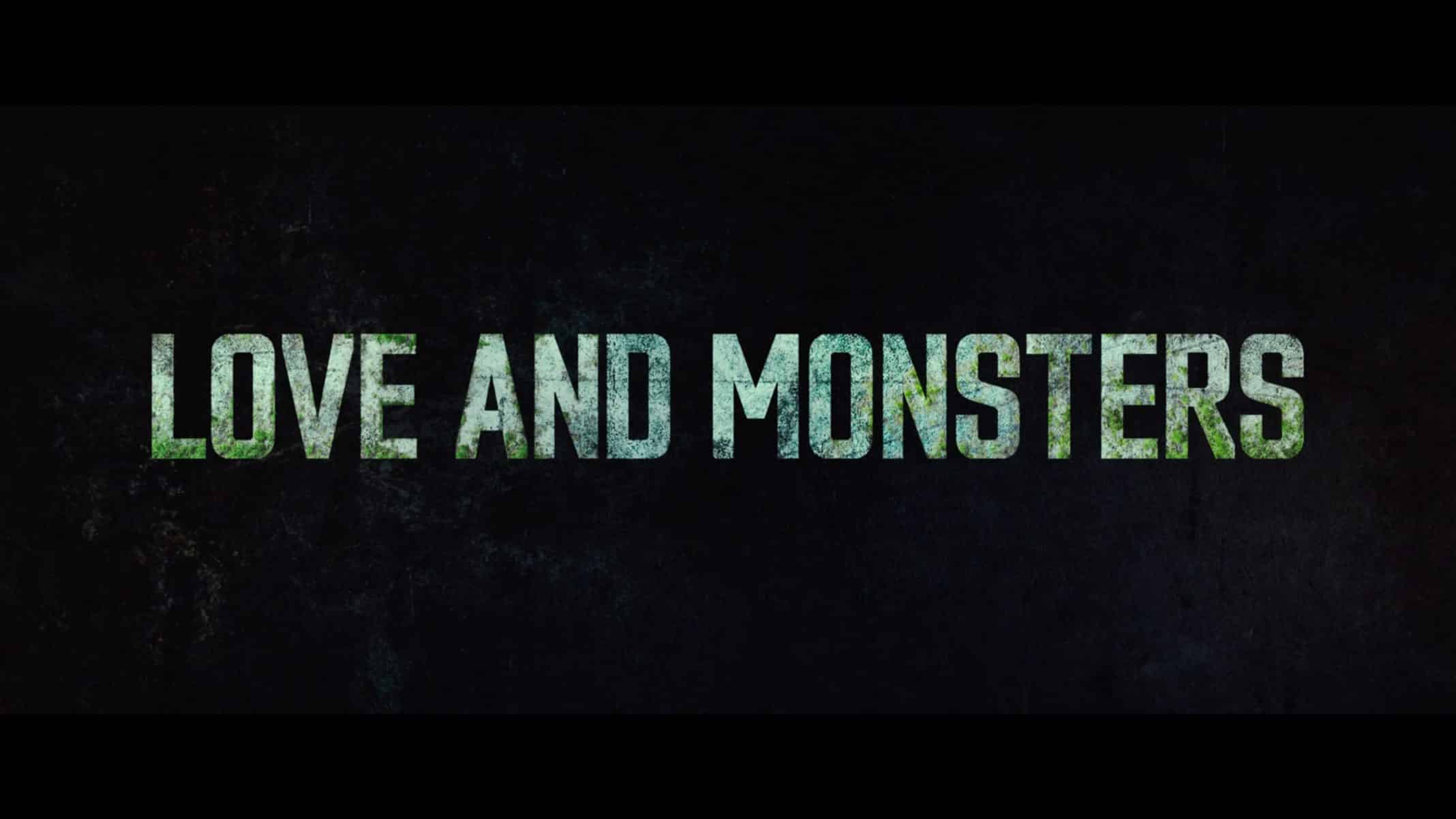 “Love and Monsters” reminds you Dylan O’Brien is one of this generation’s top action stars and will likely be the one people compare others to in the future.

In order to keep an asteroid named Agatha 616 from having humanity die like the dinosaurs, multiple nations send missiles at it and do end up destroying it. However, the chemicals from the massive amount of rockets rain down on Earth and lead to everything from snails, ants, and frogs mutating and sometimes becoming multi-story entities. Thus leading to 95% of the population being wiped out in 7 years and what remains going either underground or into caves.

But, Joel, after searching for his girlfriend for years, he finally learns what community she is in, and despite PTSD, he makes a 7 day, 80+ mile journey to be reunited. Though considering Joel has little to no training and has been shielded from the outside world for the last 7 years, will he get to be reunited with Aimee in life, or will he have to wait until she dies as well? 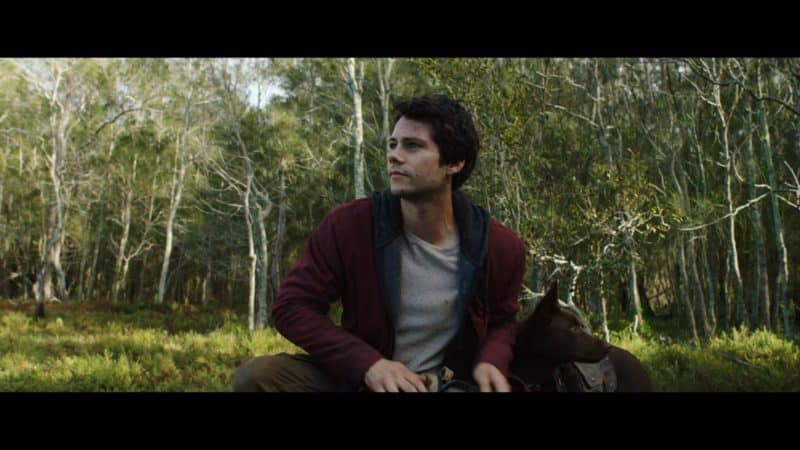 This is the kind of movie I wish got to open wide in theaters and was seen in a Dolby showing. There is just so much to this that you feel is lost when watching it without a pricey entertainment system. For the monsters’ visuals, the fear as Joel hears them coming and they rip through the Earth, it reminds you why the death of movie theaters could be devastating.

Though credit is also due to O’Brien, who is at the point that to compare him to Tom Cruise, Will Smith, whoever, while meant to be a compliment, is slowly becoming an insult since he has his own pedestal at this point. Mind you, not with as many this under his belt, but he’ll get there. Especially when you consider most of the movie is just focusing on him, a dog, and while Minnow and Clyde are there for part of the journey, they aren’t there for all of it. Leaving you in O’Brien’s hands, and he keeps a firm grasp on you throughout the movie. Making it so, even if watching at home, your desire to check something while watching “Love and Monsters” is minimal.

Can we start by saying Clyde, played by Michael Rooker, of “Guardians of the Galaxy” fame, could and should star in a spin-off? Even if it is just him and Minnow, who we’ll get to in a second, and the journey they went on and have that line up to how this film ends? Because, if you loved him as Yondu, you’re going to get a sense of nostalgia watching him as Clyde. He is this father figure who is no-nonsense yet still gives off the vibe he cares. Not to the point of screwing himself over but making sure you don’t die on his watch.

Which you can see in Minnow, who, aside from Greenblatt being adorable, also kicks ass. Granted, we don’t get to see her kill anything, but that’s another reason for the sequel/ spin-off desire. Like many in the film, Minnow has experienced trauma and had to figure a way to push past it if she wanted to survive. And the way she attaches to Joel, it warms your heart since, whether she sees him as a big brother or crush, there is this dynamic there that makes her potentially deadly but adorable. And getting to see that for, maybe, a half-hour or so, it just wasn’t enough.

As noted when it comes to Minnow and Clyde, “Love and Monsters” could easily become a franchise. Be it picking up where this movie leaves off or focusing on different parts of the United States, if not the world. Perhaps as a universe type film since, clearly, after 7 years, things going back to normal will not be a quick endeavor.

While we love the adventure and the main characters, we gotta admit the lack of notable deaths or injuries gave us pause. Specifically, when it came to Joel after us being pushed to believe he’d get killed, over and over, throughout the movie. For what these lack of deaths and injuries do is make it seem the only reason these monsters are so deadly is because, like Joel is trying to, no one has made a guide to kill them. Add in the monsters rarely team up, and it is usually one monster vs. multiple humans, and the monsters still often lose, it undercuts the need to fear these beasts.

When it comes to “Love and Monsters,” you will only truly care about four characters. Joel, since he is our lead, and due to O’Brien’s star power, and then Clyde and Minnow. As for Aimee? Honestly, at first, it is because she is the woman Joel is trying to get back to, but she holds her own later on.

As for the rest of the people we meet? Be it from Joel’s colony or Aimee’s? You may not give a damn about them, honestly. They are just people who exist, and whether they live or die would boost how deadly the monsters are, but not get you in your feelings.

Despite a lack of danger when it comes to our leads and barely having reason to invest in many of the supporting cast members, “Love and Monsters” is an excellent film. One that, if you can see in theaters, it could be worth the trip. Since, between O’Brien, Rooker, and Greenblatt, you have three characters who get their hooks into you and leave you wanting more. Hence the positive label.

17 when the world ended, now 24, Joel felt like he had a part in his colony, but with everyone pairing up but him, it left him longing for Aimee for seven years. Hence why, when he discovers her, after hitting up over more than a dozen frequencies, he decides to make a 7 day, 85-mile journey to reunite with her – despite the chance of him dying.

Joel’s girlfriend, back when both were in Fairfield, California, who hasn’t seen him in 7 years due to Joel’s family and hers going different directions after everything quickly mutated.

With one angel baby and unofficially adopting Minnow, Clyde is very serious about survival and has a list of rules to keep himself and Minnow alive. When introduced to Joel, these rules also keep him alive, despite one dealing with either a good meal or sleep being difficult for Joel to master.

Despite the appearance of being a scrappy 8-year-old, who enjoys cursing every now and then, like any child, Minnow, who is orphaned, misses having a sense of family and multiple people to rely on. Mind you, she gets along with Clyde and feels safe around and because of him. Yet, even with not knowing the world as Joel and Clyde did, it becomes clear she still wishes she had the normalcy they got to. Hence an attachment to Joel during their journey – once he shows he won’t be someone else she knows who died.

First and foremost, Clyde and Minnow make it to the mountains but learn there are spiders that are deadly – so the mountains aren’t necessarily the safest place to be. However, considering there are bandits who’d rob old people, like those Aimee has been taking care of, who are the real monsters out there, right? Especially since, as Clyde and Minnow show Joel, not all of them are deadly and aggressive. Be it snails or crabs, some honestly are fine as long as you show you aren’t a threat, and they aren’t hungry.

Focusing on Joel, not only does he reunite with Aimee, but he also makes it back to his colony. But, when it comes to Aimee, let’s just say she has too much on her mind to be lovey-dovey and trying to make out, or have sex with, Joel. Between the over dozen elderly people, mourning someone she was close to the year before, and being conned, and having to fight for her life, she just isn’t in the mood.

Granted, after all the drama is over, a kiss from Joel does remind her of why she loved him almost a decade ago, but him feeling the need to rejoin their colony puts a pin in things. Though, this time around, it seems Aimee will be tasked with finding and getting to Joel rather than the other way around. Which considering Joel has inspired more people to venture onto the surface, it may not be as hard for her as it was for him.

Does “Love and Monsters” Have Sequel Potential?

ABSOLUTELY! Whether recapping Minnow and Clyde’s journey, showing the various groups Joel has now inspired to head to the northwest mountains, or skipping ahead to them trying to rebuilt civilization, “Love and Monsters” could easily produce a sequel.