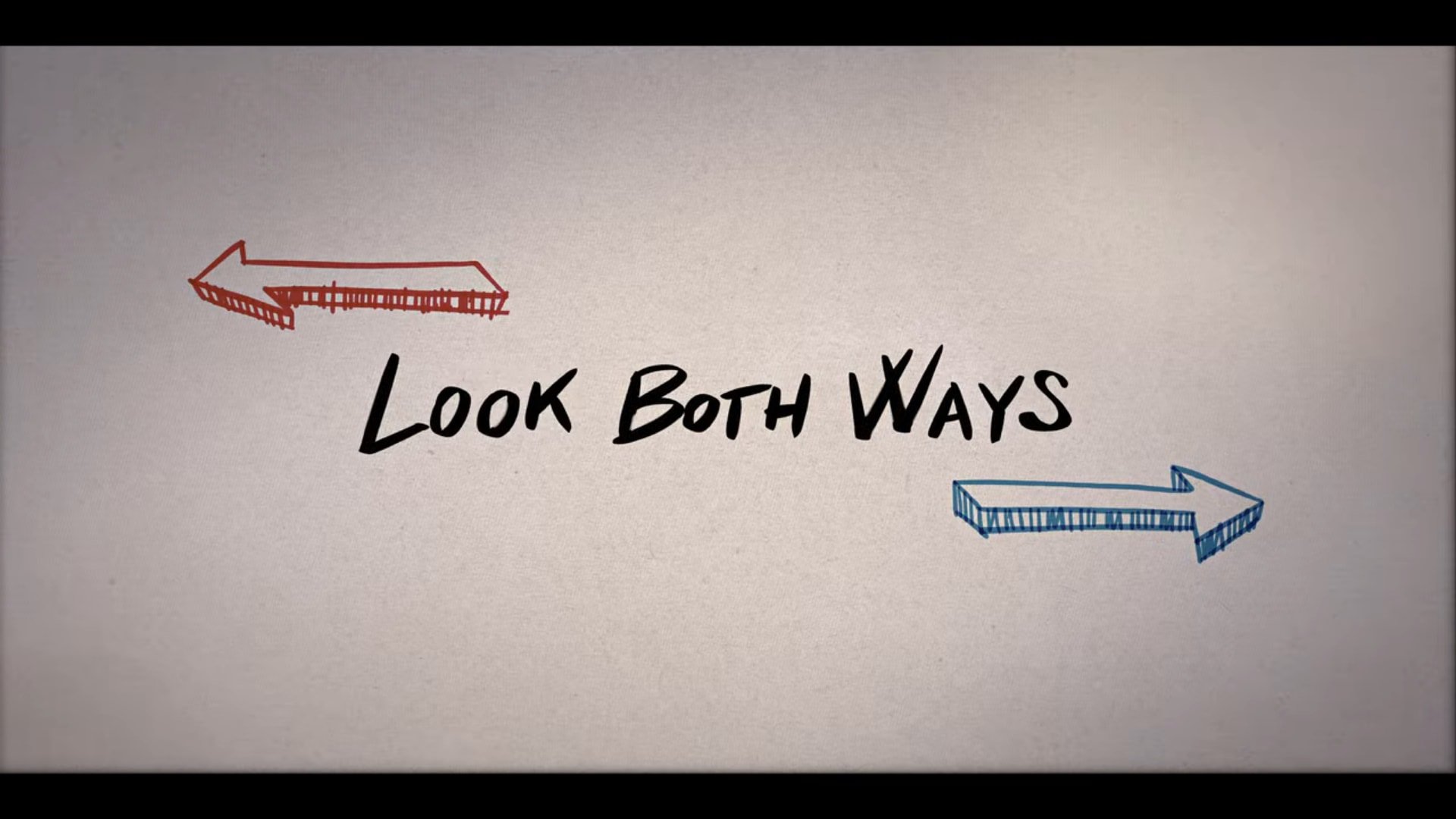 “Look Both Ways” reminds you that what is meant for you will happen, whether you have a child or not.

It was just a moment of being impetuous. Gave and Natalie were graduating soon, so they decided to hook up one night, with a condom involved. But in one version of Natalie’s life, she got pregnant, and in the other, she went off to Los Angeles with Cara as planned. In the version where she ends up pregnant, she gets Rosie, her daughter, who makes her sometimes feel like she has to put her dreams on hold, as Gabe, while a devout parent, continues to gain momentum as a drummer.

Then, in her childless life, Natalie seems to stick to her five-year plan and even gets hired to work for a legendary person in animation, Lucy Galloway. However, being childless doesn’t mean Nat is without obstacles, as she has to learn to advocate for herself, navigate a relationship with her co-worker Jake, and figure out how to get Lucy to see her work and believe she has her own voice as an illustrator.

Natalie is the planning type. From learning 2D and 3D animation in college to diversify her skillset to having a five-year plan for her life, Natalie tries to limit the number of surprises she has to deal with whenever possible.

Gabe is one of Natalie’s college best friends and a drummer for a cover band.

Cara is Natalie’s female best friend and roommate in the storyline, where Natalie doesn’t get pregnant. She works in marketing, and while she doesn’t like her job, unlike Natalie, she doesn’t change course.

Jake works for Lucy, but his passion isn’t animation. He wants to work in live action, doing narratives or documentaries.

Lucy is a legendary figure in animation who is an alumnus of Pixar and started her own animation studio, Tall Story Animation.

Rosie is the name of Gabe and Natalie’s daughter. She inspires Natalie’s first animated production and is one of her first big fans.

When any movie splits its narrative between multiple people or situations, it is easy for it to feel lopsided as one side develops into a better storyline. That doesn’t happen in “Look Both Ways.” With certain people and moments just fated for Natalie’s life, the two sides remind viewers that the path might be different, but what is meant to be will be. So whether Natalie is changing diapers or chasing out goats from Lucy’s conference room, she is still an illustrator. One who has wonderful ideas, a style of her own, and the kind of people to make such a life interesting.

Cara is featured more in the childless storyline, and while Aisha Dee doesn’t get to shine as she deserves, she makes for a decent obligatory best friend character. Then you can add in Jake, Lucy, and the challenge of meeting your heroes and them not living up to your expectations. This brings us to the flip side of Natalie getting pregnant, which allows us to see more of Gabe, meet Nat’s parents, who are not too pleased with her getting pregnant, and the complexity of motherhood.

Both storylines give you what could easily be a movie within itself and keep you engaged throughout the nearly 2-hour film.

We have no real desire to stir the pot about controversial issues. However, it isn’t lost upon us that “Look Both Ways” is completely built upon Natalie having a child or not and how having a child upsets her 5-year plan. Now, Gabe does sheepily mention that Natalie’s choice is one he will support, whether they become parents or not, but he is the sole person to put that out there. Despite their anger and disappointment, Natalie’s parents don’t bring up abortion. Though Natalie is also from Texas, maybe that wasn’t even a mental option?

Either way, on the one hand, you can appreciate that it was shown being childless didn’t mean Natalie suddenly had a great and easy life in Los Angeles with her best friend. But, as a mom, you are shown how easy it is to lose yourself for the sake and survival of another. Yet, as a mom, Natalie got what the childless version didn’t, which is a character, a story, and her own voice much quicker. But, at the same time, childless Natalie dated, moved away from home and had a job.

So, you do have to appreciate the pros and cons given to both methods while pushing the idea that it isn’t always the end of the world if you have and raise your child. Though we would be remiss to not mention Natalie lives in a multi-story home with two parents who allowed her to live in their house, potentially rent-free, and the child’s father played an active role in her daughter’s life. So, let’s not discredit the sheer amount of privilege Natalie had.

Oh, and if I may add, it is also notable how much Natalie can be seen as punished for having sex before marriage, by getting pregnant, and from there not having any sort of relationship and intimacy thereafter. Almost like she is being punished for pre-marital sex, and thus, only Gabe making an honest woman out of her will end her being single.

Which, I should note, as a new mom, what time would Natalie really have to date? She is the custodial parent, after all. But considering how the majority of films and shows push a more progressive idea that a woman can have it all, and even push out a baby one year and then find the love of their life in the next, some may take a more conservative viewpoint offensively. Even if, for some, it comes off far more realistic.

Sometimes there is a need to question what the best kind of supporting character is? Do they simply need to have a life established outside of the lead? Is it their personality has to be on the level where you can imagine them being the star of the film? Should they have a clear, undeniable effect on the lead obtaining their goals? For each film, we question this, as we note time and time again that the supporting characters lack oomph, and “Look Both Ways” is no different.

As noted in the highlight, fresh from “The Bold Type,” Aisha Dee feels wasted and like a modernized version of the token Black best friend. Oh, and token queer character – so that’s a two-for-one special. Gabe, who has a band, and you’d assume has family, doesn’t exist much outside of Natalie’s orbit. Yes, we see him play a few times, but do we meet his parents and have Natalie deal with their perception of her after getting pregnant? No. It’s like the movie rushed through telling us Gabe is an orphan, so he wouldn’t take away any attention from Natalie.

Then when it comes to Jake, Lucy, and even Natalie’s parents? Each role is the type where you recognize why they exist, but you can’t necessarily say that actor is the only one who could have played them. Yes, it is wonderful that Natalie looked up to a Black woman who, after a stint in Pixar, started her own studio. But Lucy is a colorblind casting type of character. To viewers, her being Black matters, but it isn’t something part of the script.

But that is the issue for a lot of characters. They are written to be a two-dimensional entities, no different from an NPC (non-playable character) in a video game. Each one may have a task, a brief history, but rarely, if ever, do they come off as a living and breathing person. Often, they are just a bunch of words being read by an interchangeable actor.

Look Both Ways (2022) – Review/ Summary (with Spoilers)
Overall
Like most Netflix productions, “Look Both Ways” is likable but forgettable. It feels based on an algorithm, right down to presenting a way Netflix can get others to market it rather than spend money themselves. Through what can be picked up as a pro-life, if not conservative, storyline paired with having Natalie not get pregnant, there is enough here to get the vocal minority to start conversations on social media. Thus leading to free advertisement.
Highlights
The Two Sides Feel Equal
Disputable
Conservative Sentiment?
Weak Supporting Characters
77
Subscribe to our mailing list Follow Wherever I Look on Twitter and Instagram, Like us on Facebook, and Subscribe to the YouTube Channel.