Wherever I Look
Recaps, Reviews, and So Much More
Home Indie Rita Moreno: Just a Girl Who Decided to Go for It – Review/ Summary (with Spoilers)
Indie

Rita Moreno: Just a Girl Who Decided to Go for It – Review/ Summary (with Spoilers)

Rita Moreno: Just A Girl Who Decided To Go For It somehow feels like a thorough exploration of a nearly 70-year career, yet because it is Rita Moreno, you still want more!

From arriving in the United States from Humacao, Puerto Rico, and finding it like the reverse of the Wizard of Oz, to being an EGOT and icon amongst not just Latinos but the world, so much is covered in Rita Moreno: Just A Girl Who Decided To Go For It. We go through her early years, dealing with a segregated New York to dropping out of school at 15 and working at night clubs. Then we venture into her early career, where she played nearly any ethnicity you could think of, oftentimes with her face darkened and with an accent that was carried role to role.

But, alongside her career, including conversation about her role in West Side Story, the new one, and oft-delayed reboot, there is her on OZ, The Electric Company, and so much more! However, this isn’t to say this is all work and nothing of the personal. Her off and on relationship with Marlon Brando is talked about, how he sent her to therapy, in a good and bad way, as well as dealing with rape and being assaulted working the industry.

And while yes, there are sad and unfortunate moments, as we see throughout the documentary, that energy, that glow, that mischievousness, no one, not even Rita herself, could ever kill that person. For Rita Moreno is as eternal as the work she has performed in.

We have to remember when our community only sees that in media and television and in film, when you only see those characters portrayed in that negative way, it’s not only educating other communities about us, but it’s also teaching us how we see ourselves.
— Eva Longoria

[…] we always have to prove we’re worthwhile. It’s a lot of work. It’s exhausting.
— Whoopi Goldberg 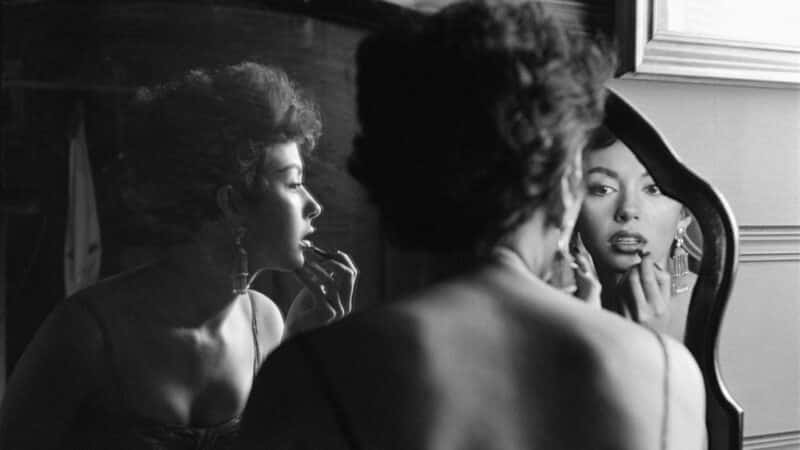 A still from Rita Moreno: Just a Girl Who Decided to Go For It by Mariem Pérez Riera, an official selection of the U.S. Documentary Competition at the 2021 Sundance Film Festival. Courtesy of Sundance Institute | photo by Getty Images.

Having to examine yourself and finding value in yourself is the only way to become a whole person.
— Rita Moreno

Living alone is really pretty neat, especially when you like who you’re living with.
— Rita Moreno

You know, you think that once you felt the warm glow of recognition, you wouldn’t fear the shadows anymore, but you know what? A lot of us still do. It’s interesting how we keep dragging our past into the present. I am so blessed. Damn the shadows and here’s to the light.
— Rita Moreno

If you feel like you’re always being discriminated against, you’re always angry, and who are you going to be angry at? Everybody? That’s poison. You can’t do it, you know. So life is what it is—on the one hand. On the other hand, it’s what you make of it.
— Morgan Freeman

So Much Is Put Into 90 Minutes, Yet It Doesn’t Feel Like Enough

In many ways, you may feel like Rita Moreno: Just A Girl Who Decided To Go For It is a robust highlight reel. One that not only hits on major points of Moreno’s career but explains certain moments and roles into details that, maybe, there might be an interview on, but now you get it all in one place. Yet, even with learning about her and Marlon Brando and her career between West Side Story and One Day At A Time, you may never feel like it is enough.

Which is strange since Moreno pretty much gives you everything, and what she doesn’t give, her friends, historians, and Moreno’s peers fill in on her behalf.

The Balance Between Presenting An Icon Yet Also A Human Being 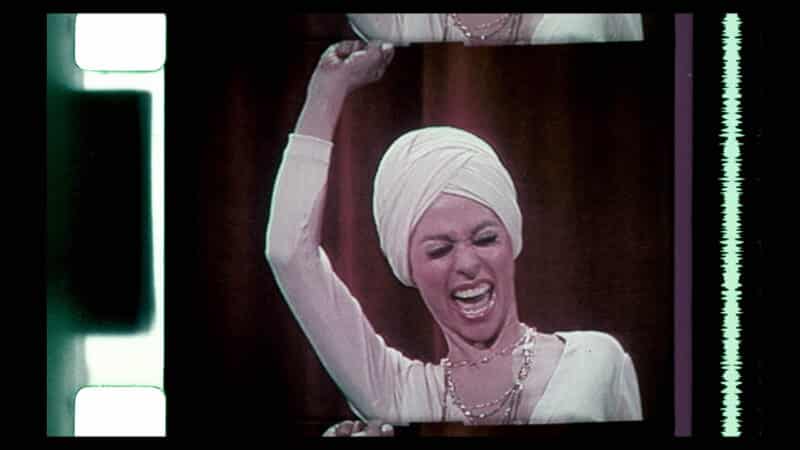 A still from Rita Moreno: Just a Girl Who Decided to Go For It by Mariem Pérez Riera, an official selection of the U.S. Documentary Competition at the 2021 Sundance Film Festival. Courtesy of Sundance Institute | photo: excerpt from the Tony Awards, used with permission of Tony Awards Productions. Copyright 1975 by Tony Awards Productions. All rights reserved. TONY AWARDS is a registered trademark of American Theatre Wing, Inc. Used by permissions. All rights reserved.

Seeing beyond the façade is what attracts many, including us, to celebrity documentaries. However, as seen with Beyoncé and Misty Copeland, documentaries could lean more towards marketing tools, which are too tightly crafted to reveal much. Especially when that figure is by no means trying to reveal themselves in too raw of a form.

With Rita Moreno: Just A Girl Who Decided To Go For It, be it because Moreno has nothing left to prove or has long been accepting of herself and her role in the industry and life, we get flaws and all. Be it how her marriage was not all it was cracked up to be, despite the impression many had, including feeling relieved when her husband died. Add in a suicide attempt, talking about going to therapy, and you feel like Moreno isn’t divulging this to be inspirational but to show you she has flaws too. That she has gone through a lot of s***.

And with that, it becomes more of a choice for you to put her on a pedestal than she or the documentary to do it for you.

For us, Moreno’s career was West Side Story and then beyond. Everything before that wasn’t known, and even what we did know, the importance of her existence, her advocacy, it honestly wasn’t on our radar – hence we watched this film. But, in understanding how the studio system was for her, her point of view of playing roles we’d modernly see as “Blackface,” and pushing against the narrative all Latina women should play are indigenous people or sexed-up women, you are reminded why someone can’t just be an icon due to staying power. You have to do something, say something, and push things forward.

And even when there are mixed feelings, like it is noted some had with Anita, you need to be that reminder that this is one voice and not a representation for every last person who looks like this. Much less, in the pursuit of present diverse voices, never forget that sometimes the voice, the people you feel are stereotypical, often what makes them a stereotype on screen, as Lin Manuel Miranda says, is who is writing and directing the character. Because these people deserve to see themselves too. The Lydias, the Googie Gomes, they shouldn’t be silenced just because they may not feel politically correct or “uplift the race.” Many of them are our parents, cousins, friends, and without them, you would never know the high horse you so happily sit on.

Wishing We Got More Time Stamps

Maybe this is purely personal preference, but I’m someone who likes it when they let you know the year just so you can realize how much time has jumped from topic to topic. Because with Moreno’s energy and the way the film is set up, it’s like a speeding train. One that only slows down when Moreno feels the need to get serious, and then it’s off screaming down the tracks again.

So with that in mind, you’re left to take note of certain events to figure out how much time has passed, like what role she’s in, what awards show, and while you have a slight grasp, it is easy to forget we’re going through decades. Which, yes, is what allows the pace of the film to never slow down but makes you wonder, despite how much is said, are we gracing over anything? 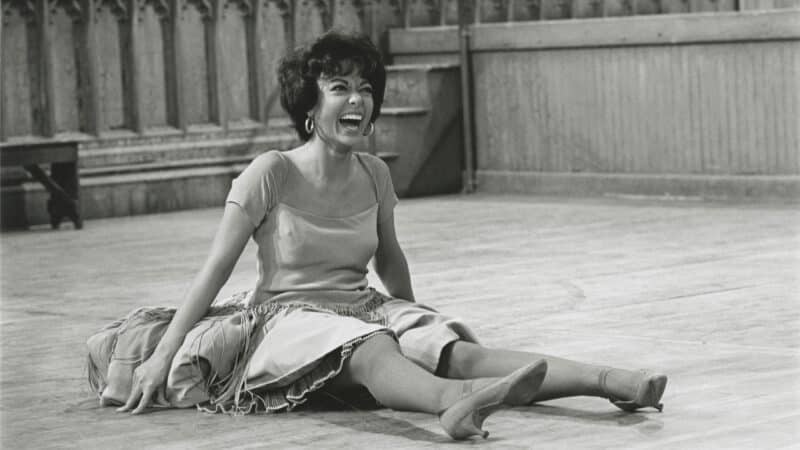 A still from Rita Moreno: Just a Girl Who Decided to Go For It by Mariem Pérez Riera, an official selection of the U.S. Documentary Competition at the 2021 Sundance Film Festival. Courtesy of Sundance Institute | photo: West Side Story copyright 1961 MetroGoldwynmayer Studios Inc. All rights reserved. Courtesy of MGM Media Licensing.

Rita Moreno: Just A Girl Who Decided To Go For It is a gift. Even if you feel like there has to be so much more, no one can say Moreno and others who spoke didn’t give you everything you could want. It’s just, with it being Rita Moreno, of course, you become greedy.

Hence the positive label and recommendation. This documentary is probably one of the best we’ve seen in years, and we’re so thankful PBS produced this since that likely means you won’t need to subscribe to anything to see it in the future. You just need a television set and time to carve out.

Wishing We Got More Time Stamps - 79%

This documentary is probably one of the best we've seen in years, and we're so thankful PBS produced this since that likely means you won't need to subscribe to anything to see it in the future.