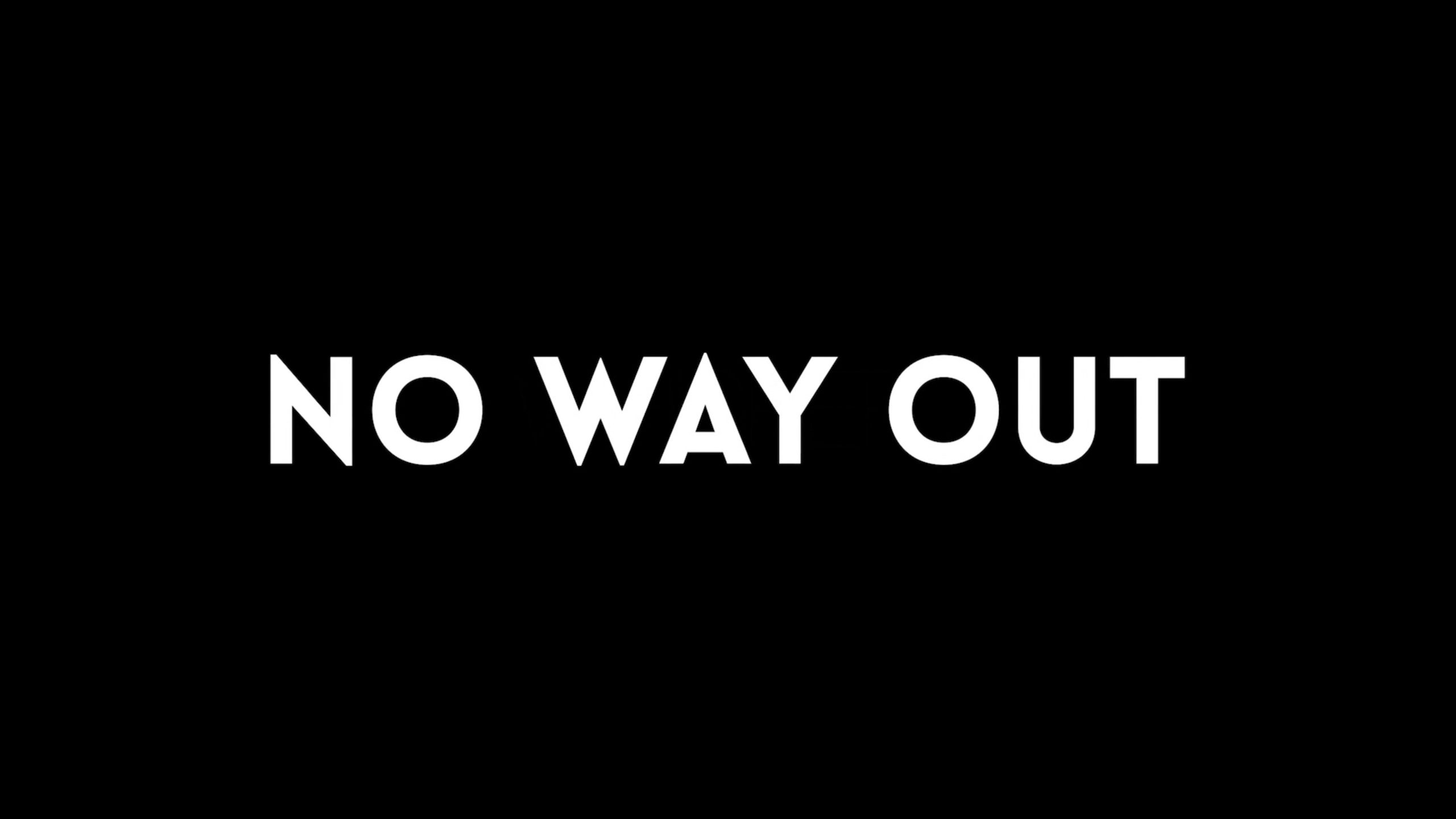 "Title Card for the movie No Way Out," No Way Out, directed by Azi Rahman, 2022, (Vertical Entertainment)

While the beginning of “No Way Out” gets you wrapped up in its leads’ love affair, once it transitions from being a romance, it is all downhill – right off a cliff.

Chicago Native, Nick, has come to LA to jumpstart his photography career, and while he has some help from a friend, he isn’t making the big bucks. Mostly he gets gigs to do shoots for Soundcloud rappers and other freelance work until Tessa comes into his life. She is someone he meets from a dating app and creates a major change in his life and career within weeks.

But, while it is all sex, drugs, and her eccentricity in the beginning, she sees a familiar face, her world stops, and the inertia flings Nick forward. His crash comes as Tessa asks Nick to do something beyond support her as she remembers all her trauma, and so comes the question if Nick loves Tessa enough to kill for her?

Nick is just a boy with big dreams who headed to the coast to have them realized. However, dreams didn’t come true in an instant, and while he has his mother’s vocal support, neither of his parents can give him financial support. So, he freelances and hustles as he needs to in order to make ends meet and creates some time to go dating when he can.

It’s hard to say whether Tessa is an angel or a demon. Blonde, with a sly smile, she is charming and notable whether in a one-on-one conversation or amongst models in the same room. But, like many, she is troubled and not in a way where she has found strength and doesn’t want a man to fight her battles. She wants Nicky too. Including possibly killing multiple people.

What makes “No Way Out” worth checking out is Maia Mitchell. The way she teases Nick draws you in with her air of mystery and guides you through her version of Los Angeles makes the film. And even in more intimate moments, beyond the sex scenes, there is something there. Mitchell has it where you invest in not only Tessa but also Nick and pushes you to theorize what can happen with their relationship.

I’d liken it to how, as Callie on “The Fosters,” she was able to quickly, despite likely not knowing who she was back then, bring you into Callie’s story for multiple seasons and a whole other series.

When Mitchell Isn’t Written Into The Scene, “No Way Out” Often Feels Lifeless

But that creates a major problem for “No Way Out.” While Bicicchi isn’t a bad actor, he doesn’t have the charisma and screen presence that Mitchell has. So when Mitchell’s character disappears for about a half hour, towards the latter half of the film, it gets dull – quickly. What doesn’t help is Nick isn’t a character who, on his own, you are given much reason to get into. Yes, he is a photographer, but he doesn’t speak about it romantically or creatively in a way to get sucked in by his passion.

Also, the supporting characters, whether Nick’s best friend or those who terrify Tessa, aren’t developed much. Nick’s friend is a woman who seemingly has a more commercial network than him and tries to get him work, but his stubbornness gets in the way. As for how she got these connections, what is her life outside of Nick? While it isn’t necessary for the story at large, her being purely defined by what she can do for Nick makes it so only hearing her name once isn’t an issue, for you aren’t given a reason to care.

Then, when it comes to the people Tessa is so scared of, she pisses herself? Again, you can see how much Mitchell is used as a crutch, and things fall apart when removed from “No Way Out.” She presents them as these scary and dangerous guys but then leaves Nick to handle them solo. And when you compare Tessa’s build to how Nick handles each one, it creates a glaring split that shows you why Mitchell is more than a star but a producer of “No Way Out” because she is far more than just a name to get a budget and distribution.

No Way Out (2022) – Review/ Summary (with Spoilers)
Overall
“No Way Out” is the type of film that puts all its weight onto one actor – Maia Mitchell. You could easily assume this is because of experience, charisma, how the character is written, name recognition, and many other reasons. However, doing so makes the film completely dependent on Mitchell to the point that “No Way Out” seems like a decent, if not good, movie if she is on screen. But, when she isn’t, and you’re left with everyone else cast? You may feel Mitchell does more harm than good when her co-stars are tasked to drive the film.
Highlights
Maia Mitchell’s Screen Presence
Disputable
When Mitchell Isn’t Written Into The Scene, “No Way Out” Often Feels Lifeless
71
Subscribe to our mailing list Follow Wherever I Look on Twitter and Instagram, Like us on Facebook, and Subscribe to the YouTube Channel.