C’mon, C’mon might be seen as Joaquin Phoenix’s next big awards contender, but what it really does is set up Woody Norman to walk in Phoenix’s footsteps. 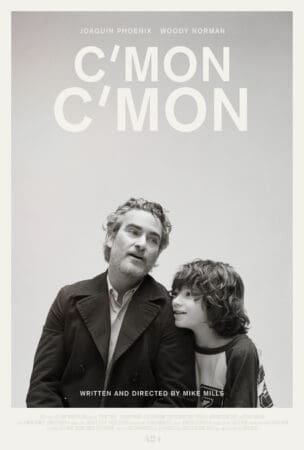 Johnny, a journalist who interviews kids across the country about how they see the future, only really has one friend. His friend is named Viv. She is an educator, a writer, and has a son named Jesse and a husband named Paul, a musician. Unfortunately, Paul suffers from a mental health disorder for which he hasn’t necessarily found the right cocktail. Managing both an imaginative, talkative, and educated Jesse and dealing with Paul, who is having an episode, is too much for Viv. So, Johnny volunteers and realizes how annoying kids can be, yet the blessing they are at the same time.

Jesse Isn’t A Little Adult, Just Someone With The Tools To Be A Good One

Precocious children are not only difficult to write but aren’t always executed well. There is a delicate balance between showing a child who still has the innocence or ignorance of a child, paired with their street smarts, book smarts, or the type of knowledge you wouldn’t associate with a child of their age. With Jesse, you get a perfect balance.

What we get from Jesse is a kid who, because his mom is an educator and father dealing with a mental illness, was given all the tools needed to understand his emotions and the space to question how others feel. But, despite these tools, often we see Jesse as a child who might be aware of how to use those tools on others, but not so much himself. And even when it comes to others, like Johnny, there is a lack of discernment on when it is appropriate to question how an adult feels and knowing when to back off.

This is all done with a sort of innocence since, in the safety of his mother’s presence, she is looked upon to handle a situation that can get out of hand. But with Johnny a borderline stranger, Jesse is uninhibited and without reins. Thus, you can see a child who has attained a massive amount of information, yet also one overwhelmed by his youth, the helplessness of his situation, and dealing with a person whose experience with children is purely one-sided or transactional.

Having A Father/Spouse With Mental Health Issues

The way Paul is handled is delicate yet also doesn’t necessarily pull punches. He is someone with a challenging illness that is hard to balance for Viv while raising a child. He hasn’t the right cocktail, perhaps has mania, yet he is the father of your child, and Jesse longs for him during his absence. But, how can you give attention to both? How can you raise one young man while worried about the actual man in your life potentially having an episode?

Watching Viv juggle the two, alongside Jesse going through things, furthers the conversation of the importance of someone taking care of their mental health and providing the tools to your children to prep them for possible genetic predispositions.

Many of us have some inkling to have children but don’t fully understand what it means for a child to not just look at you for protection and love, but also their source of money, entertainment, and so much more. As Johnny sees, while brilliant in many ways, Jesse is infuriating in others. Yes, in conversation, his mind works in curious ways, and seeing him pick up on Johnny’s work and being fascinated by the technology you can see brings a sense of joy and pride for Johnny.

But then there are the tantrums, Jesse wandering and thinking sometimes it is funny. Also, there is him having sleep issues, separation anxiety, and so many other things that only someone with a kid in their household would understand. This not only demystifies the experience of having a kid but also what it means to have a kid who is notable for their intelligence, among other attributes.

While most of the film focuses on Jesse and Johnny’s relationship, he doesn’t stop working throughout the film. He goes to Detroit, LA, New York, and New Orleans to meet, speak and record conversations with children. These interviews do multiple things for the film. One, it firmly established Johnny’s job, but from there, it also presents to you that, while Johnny has made a career interviewing kids, he doesn’t know how to have a real conversation with one.

And it’s in that you really get to see and understand the difference between talking to someone else’s kid and getting to know them vs. raising your own. Most of the kids note they feel like adults don’t listen to them, and you can see Johnny do just that with Jesse. In fact, you could say Jesse doesn’t want to be interviewed because he sees how Johnny operates. He takes what he needs and explores how they feel with cut and paste questions, but he isn’t really getting to know the kids who are all excited that an adult seems to value their thoughts.

With that said, the answers the kids give are intriguing, and having additional interviews play during the credits was such a gift.

C’mon C’mon is a reminder of why notable roles for child actors should exist outside of productions aimed at their demographic. Through their relationship, Phoenix shines in ways that he can’t with adults and seemingly taps into a new muscle to exhibit. Then when you add on how giving and how he collaborates with Woody Norman, it gives you the type of performance that makes you wish there were notable accolades that recognized child actors. For while the writing was great, as was Phoenix, the kid was beyond expectations. Especially since, while he had dialog written by adults, he never came off unreal. Jesse had the tools his mom wished his father had but didn’t fully understand what the tools were for. He just understood adults got a kick out of them. Which, in Norman’s performance, leads to you getting a kick out of him.

Hence the positive label and recommendation. Phoenix delivers an expected quality performance and Norman may surprise you considering the lack of challenging roles for young actors. Especially ones that don’t have them under intense trauma. C’mon C’mon (2021) – Review/ Summary (with Spoilers)
Who Is This For?
Those who enjoy films which have young actors tasked with being present and more than an accessory to their parents. Instead, they are treated almost as equals and expected to give an emotional, comical, yet layered performance.
Highlights
Jesse Isn't A Little Adult, Just Someone With The Tools To Be A Good One
Having A Father/Spouse With Mental Health Issues
Parenting Isn't Cute Or Easy
The Interviews
Disputable
85
Follow Wherever I Look on Twitter and Instagram, Like us on Facebook, and Subscribe to the YouTube Channel.