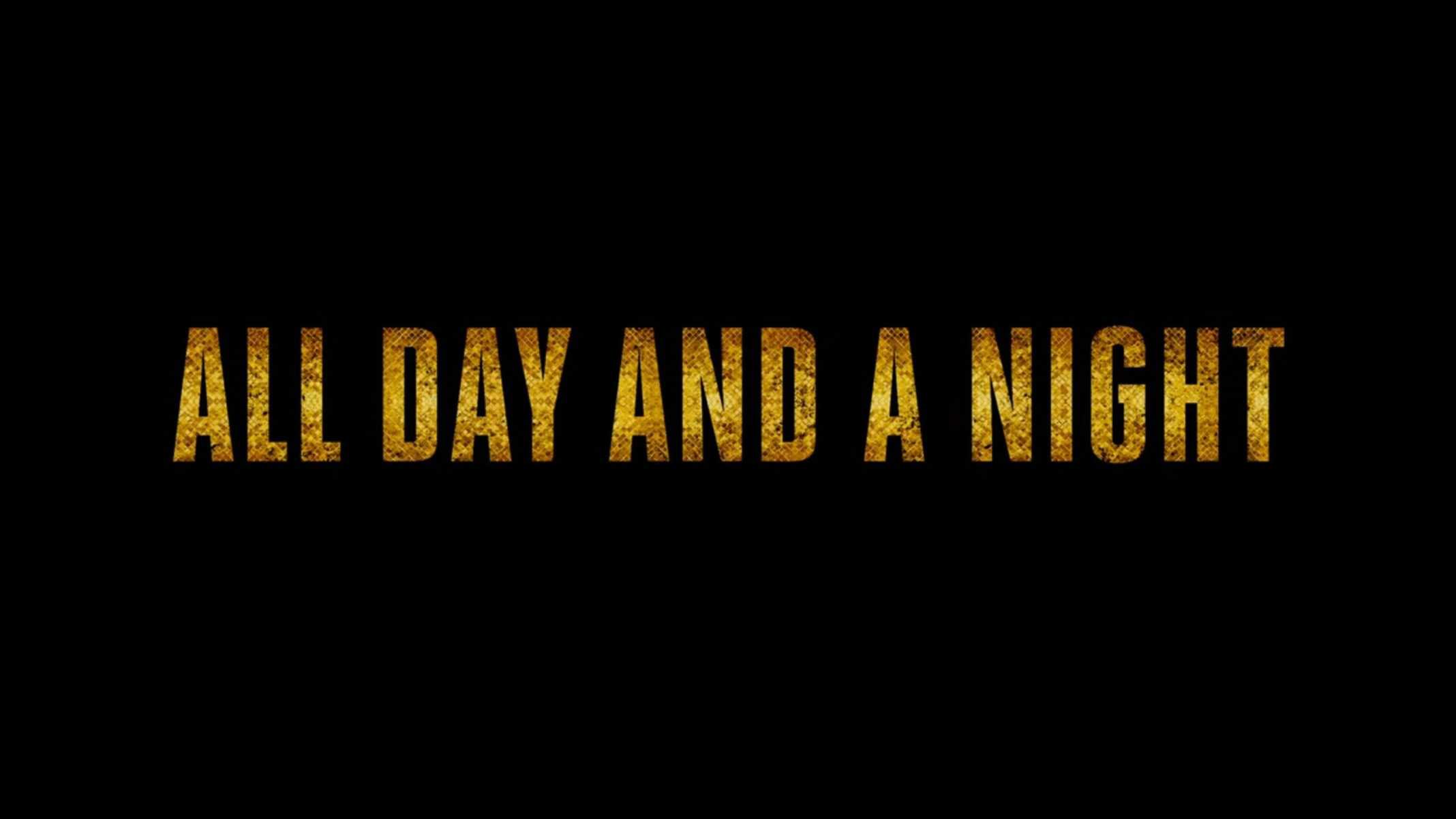 “All Day And A Night” might become a classic considering how it explores the downfall of a young man who lives up to the legacy his father left behind.

Jahkor, an Oakland, California native, was never the smart kid, tall kid, or any of the things needed to get out the hood. He was just an everyday dude with a father who is in and out of jail and mother who, well, it isn’t clear what she did. What is clear though, is Jahkor did want to be more and better than his father, JD. However, with you not being the smartest, strongest, fastest, or any of that, how do you make it? A minimum wage job at a sneaker shop isn’t going to do much for you. Robbing people for jewelry with your best friend TQ isn’t going to make you much paper, and then your girl, Shantaye, is pregnant?

Well, while Jahkor has no interest in dealing dope, local dealer, Big Stunna does admire Jahkor’s heart. So, while he won’t pick up a dime bag, Jahkor can pick up a gun, and with it, he ends three lives, including his own.

Slavery taught Black people how to survive, not how to live.
— Jahkor

Why do anybody matter? If all you gonna do is react to other people, what they say, what they think of you, and what they do, they you ain’t shit but they puppet.
— TQ

Sanders and Wright are no strangers to the urban drama, and they bring that experience to this film. Wright as JD reminds you of Wright’s past role as Lewis in “O.G.” and as for Sanders? Well, you can see him settling into a niche when it comes to his role as Jahkor. For while he has done more than “Moonlight,” you could say he has settled into playing a similar character in many of his roles. Which, when said about others, would be bad, but typecasting does mean consistent work and food on the table. And when it comes to Sanders, he is good at being that quiet, brooding kid with a chip on their shoulder. So yet another character who grew up in the hood fits him. May not show much in the way of diversity for his filmography, especially in regards to bigger production, but it fits him.

But, focusing on the characters, and less so the actors, JD presents that interesting take on how the lighter some Black people are, the more they feel the need to double down. Also, in addressing JD’s pessimism for himself, and his son, you get something a bit different here. On the one hand, you see him, as a younger man, when Jahkor is born, with hopes and dreams for him. Yet, when he realizes Jahkor isn’t special, note he doesn’t push him or anything like that, he accepts he might just end up like him.

That to me spoke volumes for often there is this focus on someone smart, athletic, or something of that ilk and wasted their opportunities. So to focus on a father and son who both were unremarkable, just street-savvy, that gives you a different vibe. Especially since, even if street-savvy, neither have goals or aspirations to become a boss. They got heart, JD a lot of mouth, but neither showed any ambition to be at the top in the neighborhood.

I should also note, though a short part of the film, you have to appreciate their bonding once Jahkor goes to prison. For it is in those moments you get the vibe that JD is less worried about proving himself or having Jahkor not be seen as a punk, and it’s more about their relationship. Alongside JD protecting his son and trying to make it so Jahkor can be for his kid, what JD wasn’t for him.

Generally, in “All Day And A Night,” women don’t play notable roles. Shantaye is Jahkor’s girlfriend, who we aren’t told anything about. All we know is Jahkor got her pregnant, and when her brother died, well, she let loose. Then when it comes to Jahkor’s mom, JD’s ex, Delanda, again, outside of who she is to a male character, there is nothing you can say about her. Well, besides she likes a good wig or swoop.

Which is why La-Trice is such a highlight since she is Big Stunna’s right hand, and maybe his lady? It isn’t clear if she is or not, but that is to her benefit in a way. With her helping with the memorials, and the operations, even showing herself handling a gun, you almost get a Lady Reed vibe, from “Dolemite Is My Name.” Not to the point you could submit Rolanda D. Bell as being a scene-stealer, but if Hollywood does further diversify its depiction of Black people, women especially, her name needs to be in the conversation.

Lamark’s Struggle To Make It Out

Alongside being an entertainer, or one of the smartest in your school, the military is also seen as a means of social mobility. So with Lamark using that to get out of Oakland, only to find himself injured, it really brings the film a pessimistic tone without feeling heavy. If not, better said, it shows you the level of difficulty there is, and risk, to make it out without either being exceptional or having an almost breakneck drive.

Mind you, this isn’t me saying you can’t get out the hood without being a savant. If anything, what I appreciate is how “All Day And A Night” takes note of how certain things have to go right for you to make it. Also, even with opportunity, there is no guarantee that said opportunity will help you lift yourself up by your bootstraps and make it out. For some, it is just hell with invisible gates.

It May Feel A Bit Long

“All Day And A Night” jumps between Jahkor’s younger years and modern times, and tries to fill in as many gaps as possible. Something that, for most movies, would deserve an applause. However, sometimes it may feel that the details given aren’t necessary and the time spent could have been used better – like on the majority of the women we see. Leaving you with a film that feels a bit bloated. Especially as the high of the ending wears off.

The Gangster Stuff Is Eh

If you’re looking for a gangster movie, this may not fulfill your needs. There is an element of gang life, in the form of TQ selling drugs and Big Stunna being in a gang war. Also, there are people shot up and a bit of violence. However, the violence isn’t gratuitous and is spread out enough where they almost act as a means to wake you up as the film gets to wear on. Oh, and if you are looking for some ass and breasts on display? Yeah, there isn’t really much, if any, nudity. People do get head, but it’s implied.

While a bit bloated at times, and suffering from women not being much more than girlfriends or mothers, “All Day And A Night” has that classic potential. Mainly due to its acting, and as much as it taps into the thug life, it doesn’t drown you in it. It focuses on other ways there is a struggle to make it out and how hopeless people can feel. That is, alongside the struggles there are just to make it home without being jacked or killed.

And it is in focusing on someone who isn’t trying to be a don or corner kid, which leads to the positive rating. By exploring other avenues, “All Day And A Night” finds other ways to explore urban life without treading, too much, on what other movies have done ad nauseam.

All Day And A Night Ending Spoilers

TQ, Jahkor’s childhood friend, he tries to kill him after Jahkor kills one of TQ’s connects, Malcolm. The person who Big Stunna was at war with until Jahkor killed Malcolm and his girl. But being that Jahkor heard whispers that TQ was coming and he wasn’t down with Stunna, Jahkor was ready, and he ends up killing him in the yard. Thus allowing him to not only see his son, his mom, and his girl but also try to make up for lost time with JD. Someone who, on sight, tries to help Jahkor navigate things since Jahkor wants to be on his own and be an easy target.

Oh, and we should note, the reason Jahkor killed Malcolm isn’t just because of Big Stunna, but because Malcolm is the one who sold drugs to JD. So, in many ways, Jahkor blames Malcolm for his father being who he became and Jahkor in extension.

To us, the main thing that can be focused on is JD and Jahkor connecting in ways they couldn’t when he was a kid since JD went to prison while Jahkor was 12. That is, alongside exploring what his mother, and his girl, go through. For between Stunna being tasked with taking care of them financially and dealing with the weight of loving someone who murdered a man and his girl, that’s not an avenue often explored.

By exploring other avenues, “All Day And A Night” finds other ways to explore urban life without treading, too much, on what other movies have done ad nauseam.