If you need a good cry, but not to the point of making an ugly face, “A Whisker Away” is just what you need.

Miyo, nickname Muge, is an eccentric and spirited tween/teen who tries to keep a smile on her face despite the troubles she faces. For example, her mother abandoned her, likely when her father and mother broke up. Yet, with her dad remarrying, now she wants to assert herself. But, while that darkness looms in the background, Miyo’s main focus is Hinode.

Who is he? Well, her crush who, to get close to him, she made a deal with a cat spirit so that she can become a cat. Thus she gets to be close to Hinode and not be forced to deal with him being unwilling or unable to deal with Miyo openly expressing her affections.

But, the path to winning over Hinode as a human gets harder and harder as it becomes easier to do so as a cat, named Taro. So there comes a point where Miyo considers living life as a cat – a decision which would be permanent and mean losing so much to gain the affection of one boy.

It Takes You On A Emotional Journey

“A Whisker Away” pretty much covers its bases when it comes to building up its characters and developing its story. It dives into Miyo’s childhood, when her mother left, how she and best friend Yori became friends, and why they remain friends despite Miyo’s antics, and it even gives room for Miyo to be seen from different perspectives.

What I mean by that is, we get to see Miyo as a friend, a daughter, a potential girlfriend, and as a person. In an almost Studio Ghibli way, minus how much Miyo’s story deals with winning the affections of a boy, we get a fully fleshed out young woman who is intelligent, complicated, and high spirited.

But, what will likely get you in your feelings are the moments when Miyo isn’t able to hold up that smile. For if my memory is correct, it takes more muscles to smile than frown, and while we work out those muscles more, it doesn’t mean people don’t get tired of baring their teeth. Especially in the case of Miyo, who smiles to make other people happy or comfortable. Which is why you’ll find yourself so invested in hoping Hinode accepts her, even if just as a friend.

Other People Have Issues As Well 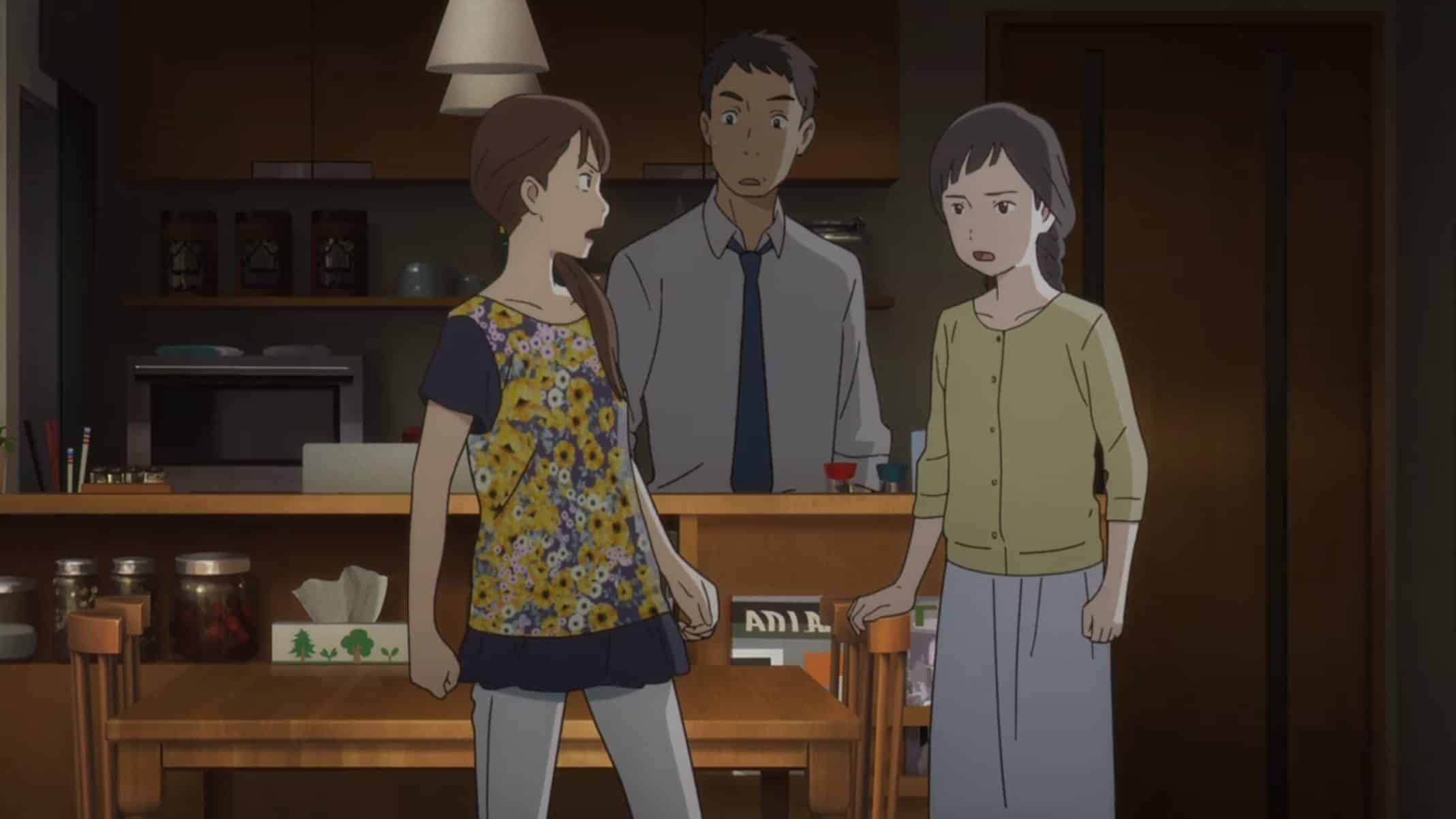 Whether we’re talking about Kaoru, Miyo’s stepmom, her dad Yoji, her mom, Miki, or Hinode, everyone has a life and issues outside of Miyo. Even Kaoru’s cat, Kinako, has her own problems. We highlight this for it expands Miyo’s world beyond her and allows you enough of a taste to see people beyond her as intricate.

Prime example, while in a place called “Cat Island,” Miyo meets a woman who left her children, and through her, we get to understand why Miki might have left. Alongside that example is getting to see Hinode’s family life and how the passing of his father has left him with so much responsibility that pursuing what he wants, expressing his desires, it is challenging. So to see Miyo so open in public, it stirs up the kind of envy which makes him both admire and borderline hate her.

Thus making it so nearly everyone has layers, though we must admit we barely learn a thing about Yori. 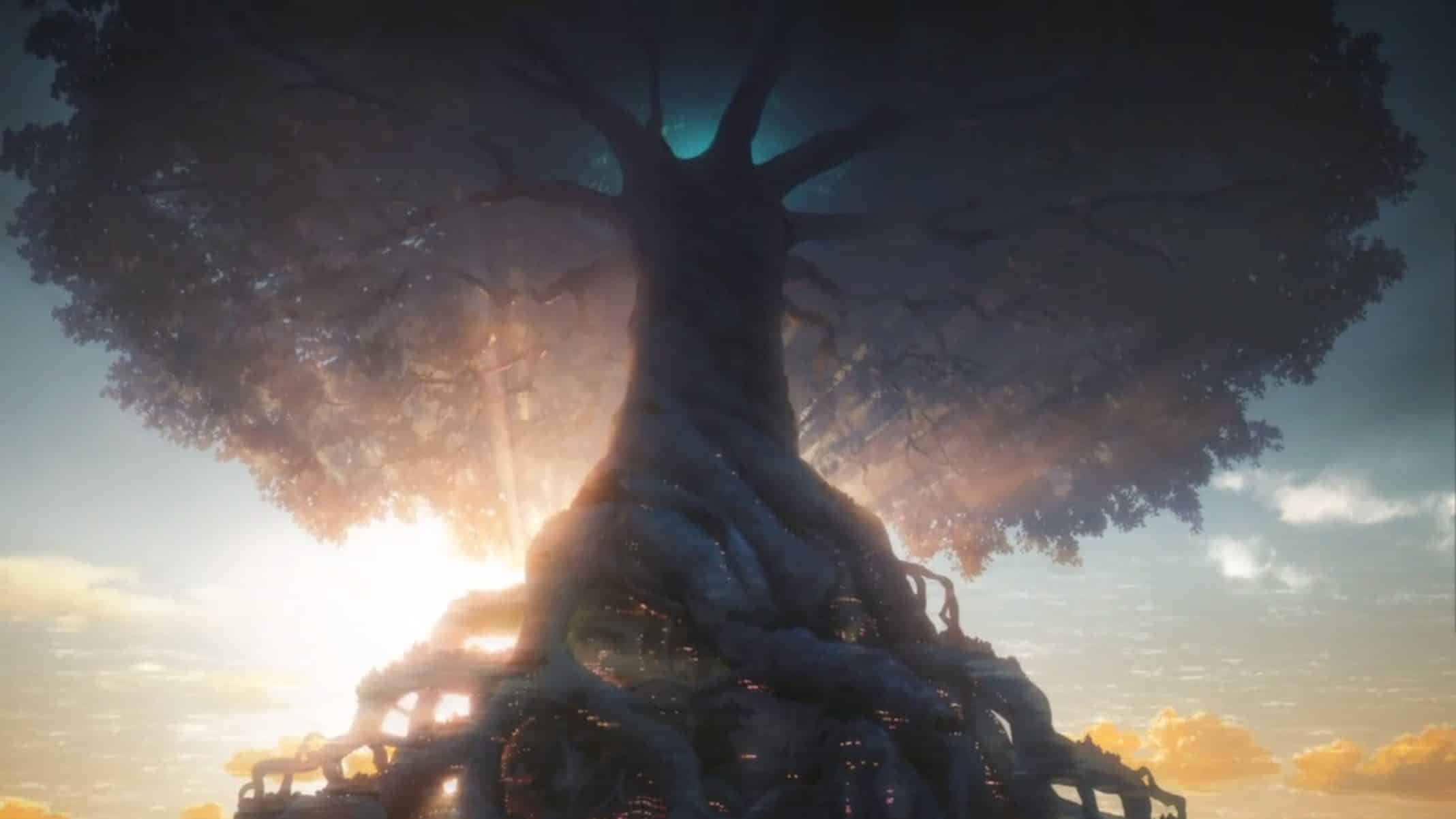 A little more than an hour into the film, they expand beyond the idea the Mask Seller is just a mischievous yokai and introduce something called Cat Island. What’s we’re shown is a haven for cats, but it isn’t clear how and why it exists, and being that living cats can go there, even humans if they know how to get to it, that brings up a whole lot of questions that go unanswered. Nothing major, but it makes for a small blemish.

“A Whisker Away,” we wouldn’t call perfect. However, any film that can get you emotionally invested to the point of tears? I’d say that compensates for the little things which you’ll probably not remember for what you are left feeling will be a stronger memory than anything else. Hence the positive label.

“A Whisker Away” Ending Explained (Spoilers)

When it comes to the “Mask Seller,” their goal is to trick humans into becoming cats since that is how they sustain themselves. They take the length of the human’s life, and it adds onto theirs, thus allowing them immortality. Now, most of the time the Mask Seller dupes adults who want to escape responsibilities. However, with Miyo struggling to win over Hinode as a human, and all the drama of her family life, becoming a cat and abandoning Miyo for her alter ego Taro becomes a better and better idea.

And being that the Mask Seller isn’t upfront about what they do and why, as soon as Miyo says she doesn’t want to be human, he snatches her human face and runs off. Giving her no idea how she can reverse what she did. Leading to Kaoru’s cat, Kinako, who takes Miyo’s human face, getting involved.

You see, originally, Kinako wanted Miyo’s human face to spend more time with Kaoru, since she raised her and Kinako is towards the end of her lifespan. However, with seeing how sad Kaoru is, with her gone, and taking pity on Miyo, she decides to help Miyo become a human again, and even drags Hinode into it. Which damn near got him exploited by the Mask Seller for they have to go to this place called Cat Island, which is this mystical world in the sky that takes the fantasy element to a whole new realm. It is there where we learn the Mask Seller has duped at least half a dozen humans, and when they hear Miyo’s story, they repeatedly help her so that she can return to human form before it is too late.

Oh, and while this is happening, Hinode is coming to terms with the fact he both likes and loves Miyo. A thought he expresses and is key to Miyo barely dodging being a cat forever. Leading us to have a happy ending. One with Hinode expressing to his mom he wants to be a potter, like his grandfather; Yori having a boyfriend, Hinode and Miyo may be dating, or at least holding hands; and Miyo’s family a little less dysfunctional. Mind you, Miki may still not get along with Kaoru or Yoji, but at least she is rebuilding her relationship with Miyo.

Considering how much of Miyo’s happiness was based on Hinode liking her, there is some room for her to be exploited. Take, for instance, the movie jumping to her teen or adult years and them breaking up. Heck, maybe even taking it so far that Miyo ends up in her mother’s shoes. You can see the Mask Seller wiggling his way in. If not by trying to get to Miyo, then maybe her children – especially as an act of revenge for taking away a deal that was nearly done.

It Takes You On A Emotional Journey - 91%

Other People Have Issues As Well - 85%

"A Whisker Away," we wouldn't call perfect. However, any film that can get you emotionally invested to the point of tears? I'd say that compensates for the little things which you'll probably not remember for what you are left feeling will be a stronger memory than anything else.