Wherever I Look
Recaps, Reviews, and So Much More
Home Movies Then Came You (2019) – Summary/ Review (with Spoilers)
Movies

Likely, by the end of Then Came You, you’ll be crying from both eyes, have snot on your upper lip, and will have a trembling lip.

Then Came You Plot Summary (Ending Explained on 2nd Page)

It’s spring 2018 and Calvin is trying every which way he can think of to avoid going back to college. Mind you, nothing is going wrong at home – it’s all him. So, to try to give him some perspective, Calvin’s doctor has him go to a cancer support group since Calvin is so sure he has cancer. During one of the first meetings, he meets Skye, someone who is stage 4 and being that she is terminal, she has very little inhibitions. Hence her befriending Calvin and pushing him not only out of his comfort zone but nearly dragging him into her life.

However, with time, he goes from perhaps being guilt into hanging out to Skye becoming one of his best friends – if not only. A girl who changes his drab world with her sarcasm and macabre jokes about dying, until they aren’t necessarily a joke anymore.

Skye Grows On You Skye (Maisie Williams): I’m a little promiscuous when it comes to support groups.

I’m not going to lie, for maybe a half hour or more, Skye is annoying as hell. Though 17, she has the attitude of a 12-year-old and while never bad enough for you to stop watching, you worry if Williams may ruin the movie. However, in time, and certainly not because she reminds you how she is dying, you come to love Skye. Maybe it is because she is this 17-year old who found freedom in knowing death was soon to come. Thus making her become more alive than Calvin and ironically bringing life to the film.

But, the big time selling point is Skye and Calvin’s relationship. Note, it was very rocky at first, and you can empathize with Calvin when it comes to wishing Skye would leave his life. However, once he realizes she is rather good to him and goes from being a distraction from his worries to someone who wakes him up from his stupor, you begin to see why he decides to get close to her. Yet, they don’t end up together.

Yeah, I know, that’s a spoiler, but it is also what makes their relationship so beautiful. Not to say Skye doesn’t push the idea she may have, or had, some form of romantic feelings for Calvin. However, whether she knows dying would destroy him if they went there or his neurosis were a turn-off, them not getting together was an excellent decision. For without romance, we see this beautiful friendship that makes what you know is coming so heartbreaking. Especially as Skye tones down the sarcasm and trying to make light of her situation and decides to be vulnerable with Calvin. Thus showing us the kind of platonic love you don’t see very often and made this match all the more special. 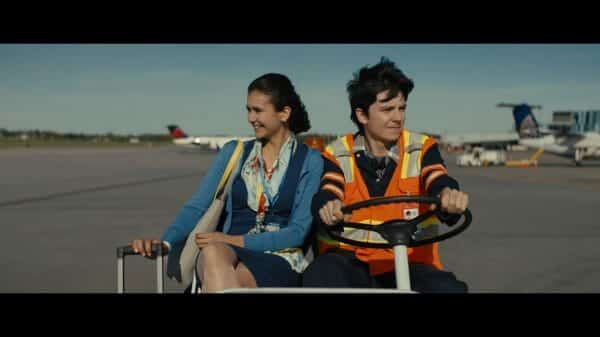 Izzy is Calvin’s love interest, and for some time you may think he would end up in a love triangle between her and Skye. Luckily, Skye has no interest, but with how strong Calvin and Skye’s relationship gets, it makes Izzy a bit of an afterthought. Heck, I’d even say their relationship, Calvin and Izzy’s, drowns because of what we see between Calvin and Skye. If only because Izzy doesn’t present anything to us which can equally be compared to what Skye gives. Making their relationship seem shallow in comparison.

While Izzy is a bit if a weak character, and relationship, when it comes to their connection to Calvin, what we see between Skye and Calvin is an experience. One which may remind you of that one annoying person who came into your life, and not you can’t imagine your future without them. Yet, through Calvin, you’ll get a taste of what that life could be and may have to pause the film to deal with your emotions.

Hence the positive label. While Skye takes a bit of a minute to get used to, once you fall for the child, as Calvin does, you fall hard. Leading to what once was an annoying character to someone funny, likable, and sadly tragic. Bringing about emotions you may not have expected since, let’s be real, the leads of this film have hit and miss filmographies.

While Skye takes a bit of a minute to get used to, once you fall for the child, as Calvin does, you fall hard. Leading to what once was an annoying character to someone funny, likable, and sadly tragic. Bringing about emotions you may not have expected since, let’s be real, the leads of this film have hit and miss filmographies.