While “The Never List” deserves props for not making sex the key to its lead coming of age, it barely presents anything beyond wasted potential. 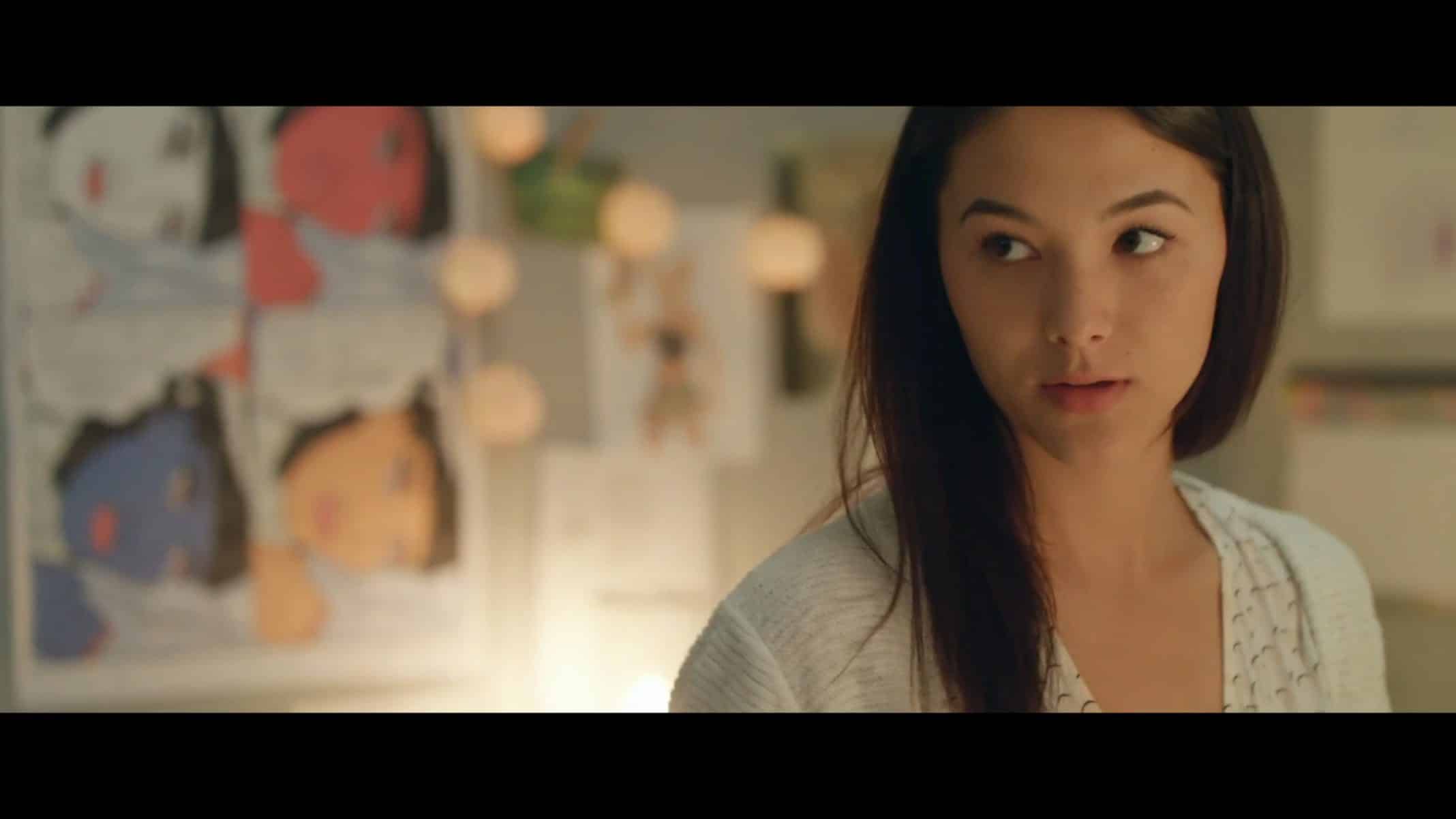 It’s junior year for Eva and Liz, and with that comes all the preparation they need to have so that they can get into a good college and be set for life. However, as a means of letting off steam, they invented these alter egos, Vicky and Veronica, and the “Never List.” Which, essentially, is a list of things Vicky and Veronica would do, but not necessarily them.

At least, that is until Liz suddenly dies, and with Eva not having her best friend to ground her, she begins to explore who she is without her and form a new identity. One that sometimes goes to extremes before it balances itself out.

Eva is the SGA secretary, who plans on running for president, is not on her way to being valedictorian, but has stellar grades, and is an artist. However, there is a part of Eva that sometimes struggles with this guise of being sweet and borderline perfect, which leads to her rebellion once Liz is no longer in her life.

All that we learn about Liz is that her parents are together, she has a brother, and she has been friends with Eva since pre-school. Beyond that? She is an utter mystery, for she is barely developed in the film. 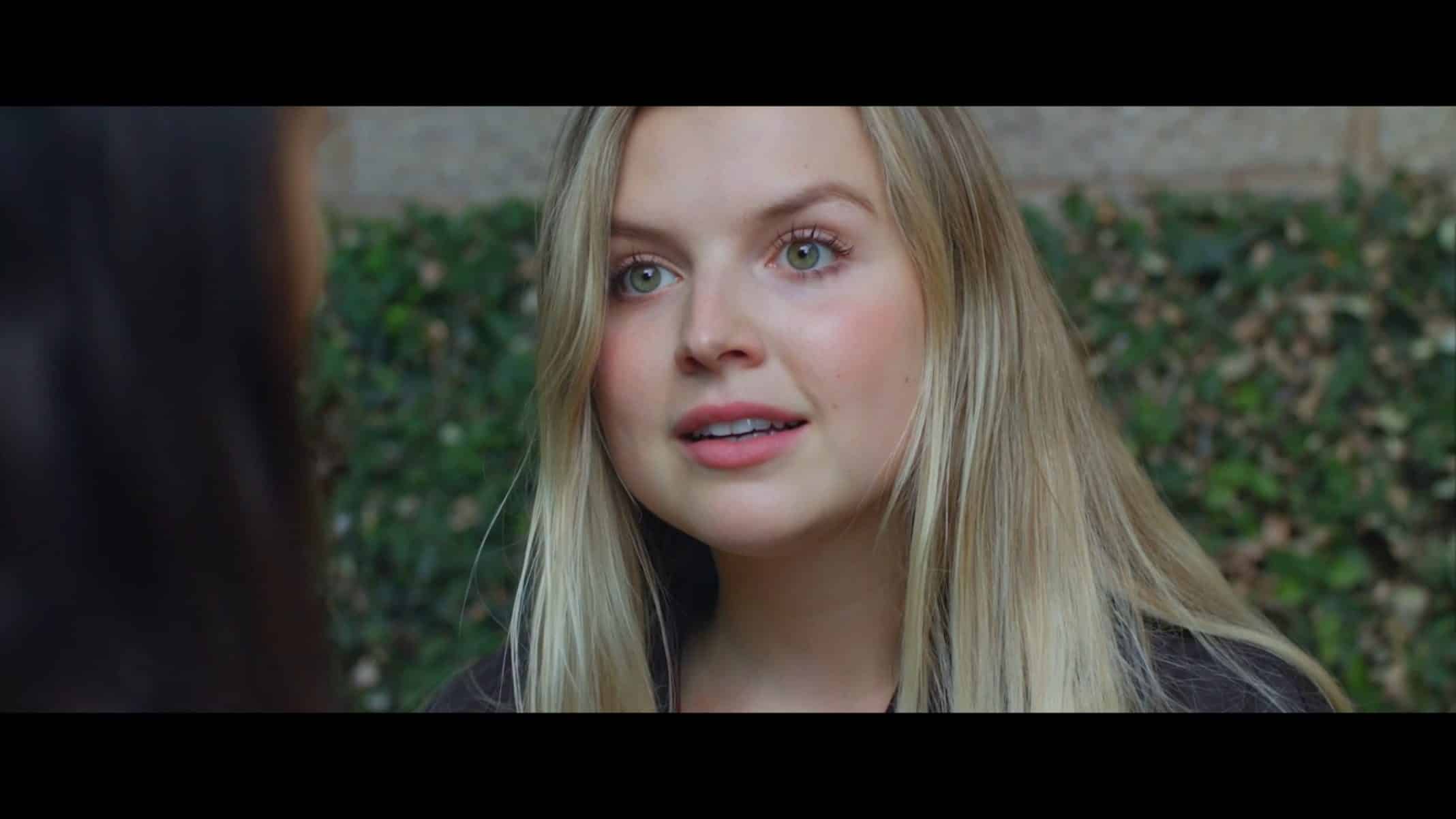 At one time, Eva, Liz, Taylor, and Joey were all in the same friend group. However, as we often see, they outgrew each other, and as Taylor got more interested in boys, weed, and occasionally getting into trouble, Eva and Liz remained studious and while not squares, certainly not into what Taylor was getting interested in. 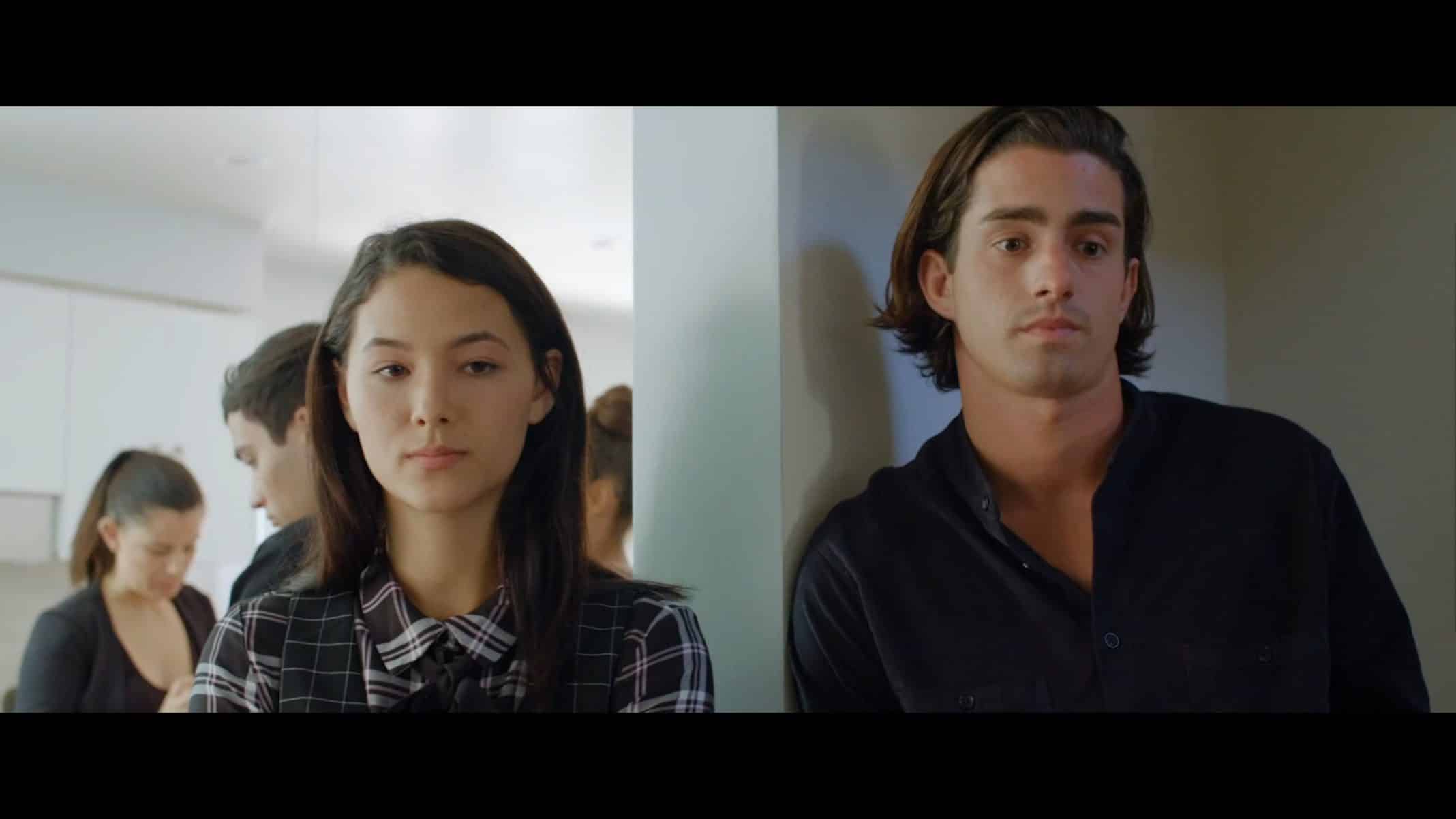 Rumor has it that Joey deals drugs and is an utter bad boy, but to Eva and Liz, who has a bit of a crush on him, he seems nice. Heck, when it comes to Joey, while he did become friends with the wrong people, him being a bad guy isn’t true. It’s just the way everyone sees him after a mistake he made.

Reconciling Who You Were, Who Your Parents Want To Be, And What You See Yourself As

The teenage years are so difficult because, on top of experiencing so much for the first time, there is so much working against you. Your parents want you to be perfect, easy to raise, and show yourself as much as independent as under their influence. Your friends want you to be fun, their partners in exploring the edge of adulthood, yet it can become clear at times they won’t experience the whole journey with you. Then add on what school thinks, society, and more, leading to understanding who you are, what you want, and what’s comfortable difficult.

For Eva, we get all of this and more, and thanks to Stewart’s charm, it pushes the idea there is more to “The Never List” than some may think. She is the quintessential good girl, and while she is comfortable in this role, it is also all she has ever known. So with the loss of Liz, you can kind of see the one person she allowed herself to truly hold her accountable gone. Since, as much as Eva loves her mother, Liz was there during the day and was there for the big moments.

The loss of that doesn’t hit as hard as it should in the film, yet there is still enough there for you to understand it. Add in understanding all these outside influences, and Eva just getting out of the most significant relationship she has ever had, even if platonic, and one could submit, what we see is a realignment of who Eva is.

To put it in a less dramatic way, we’re often split between who our parents see us as, our friends, and the adults in our lives, especially authority figures. Throughout “The Never List,” without any friend really grounding Eva, and her parents not holding much sway, you can see Eva form who she is despite how she is seen and how many want her to be. All the while, as much as Taylor and Joey play a role, neither her new friend or the possibility of a boyfriend do what Liz did.

Ultimately making it feel that Liz, while a wonderful friend, would have been someone Eva would have eventually outgrown if she lived. Making her death speed up the inevitable at a less than advantageous time.

Liz’s Death Felt Like Nothing More Than A Plot Device 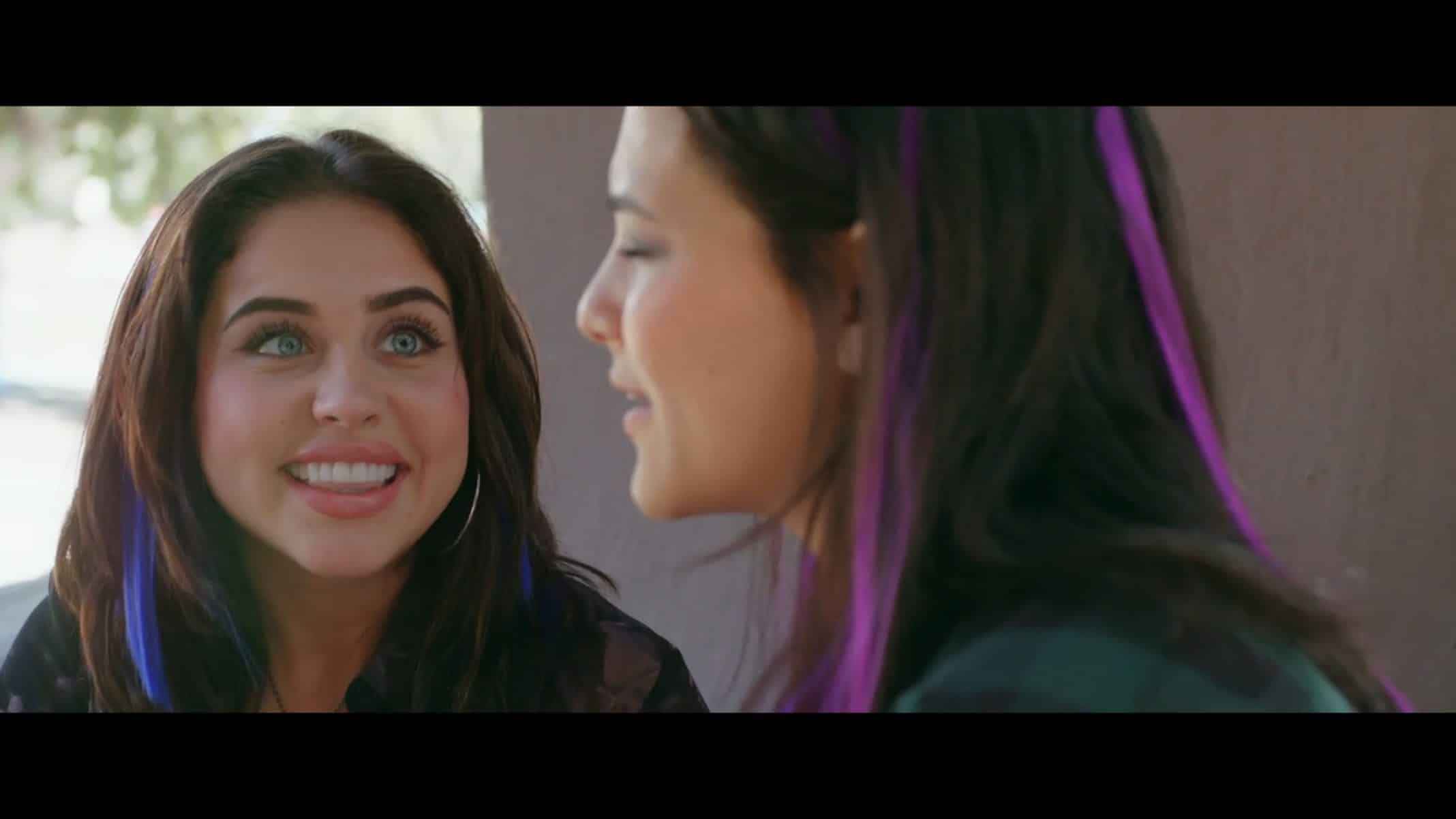 Likely, you won’t feel like you got to know Liz enough for her death to be impactful. It’s established she is Eva’s best friend, and before you know it, she’s gone before she develops into an individual. This is a problem for Liz is the catalyst for Eva’s story. Her exploration into being like Vicky and Veronica, and coming of age is based on this loss. But without caring about the person who died, and relying too heavily on how the audience would feel if their best friend died, it cripples the film.

For as much as you can relate or understand the feeling, this is a light drama. It doesn’t really dig deep into the expected feelings as much as use Liz as an excuse. Why is Eva acting this way, doing that, or no longer doing well at school? Because Liz isn’t around. It seems like the answer for everything, and it may make you feel the weight of the loss is disregarded for its only usefulness was to set Eva on a journey. What started it is but a minor thing that needed to be handled so you and everyone around Eva would give her a pass.

It Doesn’t Touch Upon Eva’s Culture – Much

Eva is Hawaiian through her mother, and while she is proud enough to push for junior prom to have a Hawaiian theme and do some research, it doesn’t really play a notable role in who she is. Now, I get it, she didn’t grow up in Hawaii, it’s more so where her mom and grandparents are from – I get that. It’s just, that was perhaps one of the few things which made Eva interesting and stand out, and it was untapped.

If not, to be a bit callous about it, it was like a sprinkle of cinnamon or some sort of meek flavor on a rather dull pastry. It gives it a little taste but didn’t really push “The Never List” to not feel a bit generic.

You Only Forgive Eva Behaving Badly, And Not Getting Her Comeuppance, Because Stewart Is So Likable

Generally speaking, Eva isn’t a bad kid. It’s just, she does the kind of things while going through the “Never List” that leads to results that should lead to greater punishments. For example, she ends up selling drugs to people who don’t handle it well, and it leads them to act in ways that could get them in trouble. Yet, nothing comes of it.

There is also another situation we can’t go into, since the film isn’t out, which creeps up on the line of what is considered appropriate in 2020? For even though it is called a prank, what Eva does leads to someone getting bullied and under the wrong circumstances, could have led to horrible things happening. But this film doesn’t wish to go that deep with nearly anything Eva does, or what happens to her, so it’s all written off with “Eva is just going through something because her best friend died!”

An excuse that gets old – quick! 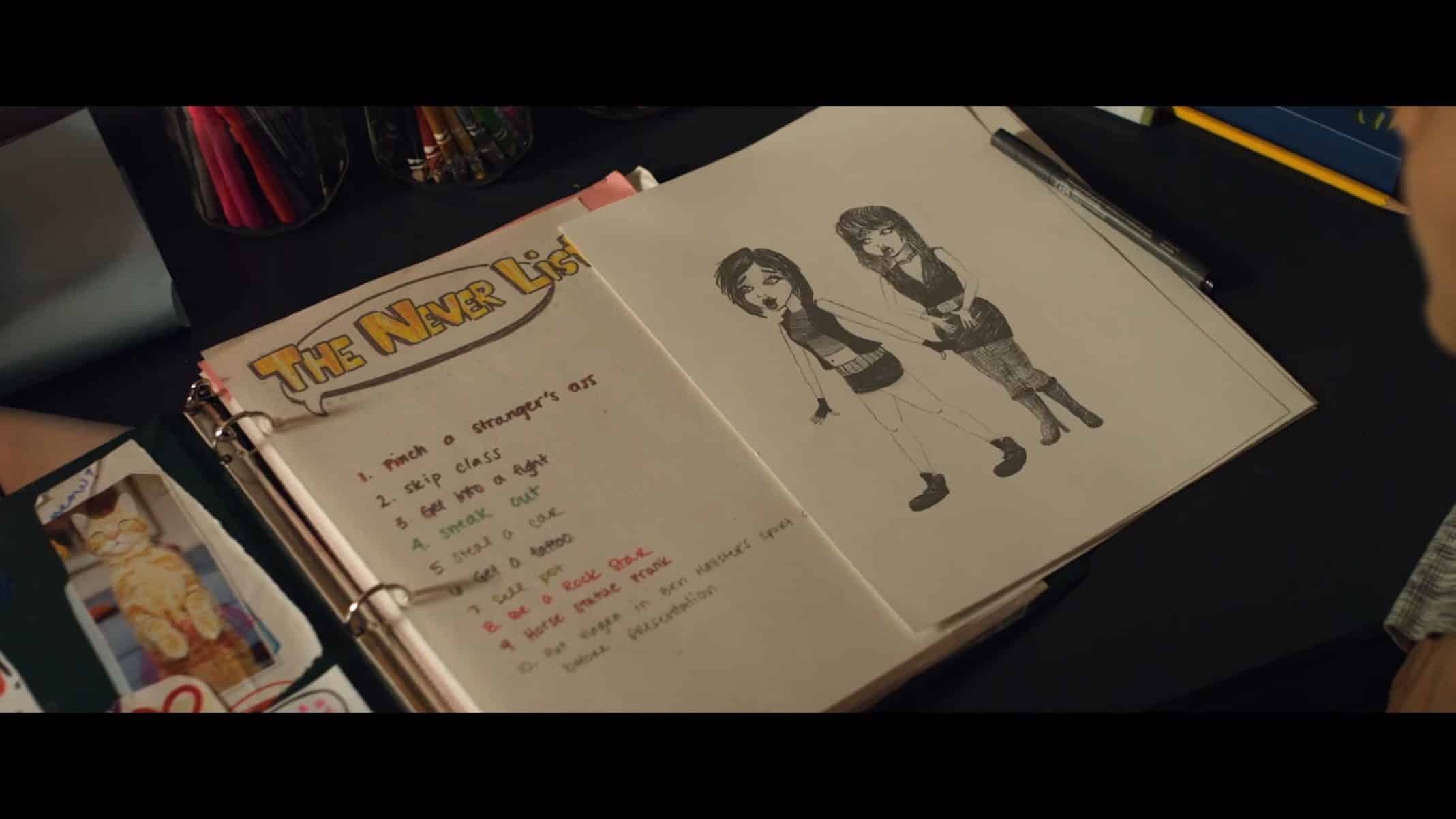 Here is the thing about the animation, it felt underutilized in showing that drawing and cartoons is how Eva expresses herself. Mind you, early on, you understand her connection to it through Vicky and Veronica being alter egos, how much it hurts that her mom doesn’t find value in her art, and her wanting to make $500 to take a class with an artist. However, then her desires drop off, and the animation just gets used to keep things light.

This to us seemed strange, for you’d expect it to be part of her means of coping after losing her best friend since pre-school. Yet, it becomes more for the viewer to shake up the monotony than something for Eva to use to express herself safely. Which, maybe for a long time, is what the purpose of Vicky and Veronica was.

In a recent episode of “Lovecraft Country,” the character Ji-ah speaks of “The Count of Monte Cristo” film as an interesting premise told poorly. That is an easy way to sum up “The Never List.” It’s premise of a girl coming of age after her friend died, and using this list of things they thought they’d never do as a means to connect with her and come to life, it sounds interesting. It’s just, “The Never List” tries to keep things light, borderline feels like it wants to be a comedy, and thus it doesn’t execute anything it seemingly set out to do well.

Hence the mixed label. While our opinion of Fivel Stewart hasn’t changed, since she is the silver lining of this movie, it’s unfortunate one of her first starring roles in a film is a production like “The Never List.”