Wherever I Look
Recaps, Reviews, and So Much More
Home Movies Little (2019) – Summary, Review (with Spoilers)
Movies

While reimagining classic films usually deserve a side-eye, Little brings something completely new and leaves you feeling like it is long overdue.

Images and text in this post may contain affiliate links which, if a purchase is made, we’ll earn money or products from the company. Affiliate links and external links contain an upward facing, superscript, arrow.

Jordan Sanders is living that dream many people had when they were a teenager. This idea that, when they get older, they’ll show the bullies and people who wrote them off and that is what Jordan did. In 25 years she went from an awkward 13-year-old kid, who’s a wiz when it came to science, to owning a company which specialized in VR applications with its own building and dozens of staff members. The only problem is, a part of Jordan died when she was 13, in 1993. Thus giving birth to a person modeled after Evilene in The Wiz.

Yet, with harassing employees, kids in her building, and one girl named Stevie, she becomes persona non grata. Leading to Stevie, an amateur magician, finding herself casting a real spell. One that transforms 38-year-old Jordan back to her 13-year-old self. Which, as you can imagine, complicates things. What makes the transformation worse though is Jordan is seemingly the only executive in her company, so there is no one to cover her in her absence. Add in her biggest client, Connor, is ready to move onto other developers unless Jordan delivers a great pitch, and Stevie’s timing can’t be worse.

Luckily, Jordan’s assistant of three years, California Institute of Technology graduate, April Williams, she appears to know enough to step in. The only issue is, she is Jordan’s opposite and doesn’t have her forcefulness or anything which, even if it was in the most aggressive way possible, got Jordan to where she is. So both go on a 48-hour journey to prepare for a better future or address the traumas of their past. One of the things Little harnesses is the inappropriate laughter which stems from tweens who act too grown. Be it in a way you can vibe with or, like April, leads you to think someone needs to whoop their ass. Now, there is also some grey area, like any scene in which Mr. Marshall and young April are together. For as comical as they are, it also makes you a bit uncomfortable.

But there are other instances too. Take note: Issa Rae and Marsai Martin lip syncing to Mary J. Blige is one example. Also, as we’ve seen from Regina Hall since Scary Movie, she knows how to present a character which is extra, but not over the top. So if it isn’t moments, like seen in the trailer, when harassing employees, looking down on people because they are broke, or being rich but still a little hood, saying okurr, every now and then, she shows herself as one of the top comedic talents there is. At least those without a standup background.

It Gets You In Your Feelings

One of the things I didn’t expect strongly was how honest Little was going to be about Martin’s take on Jordan. For when you witness her dealing with the trauma of being back at her old school, Windsor Middle, if you were bullied or anything similar, you may just feel triggered. Be it because of the isolation, the teasing over how Jordan dresses, her hair, and adjusting to that kind of rejection, it gets you in your feelings. It helps you understand why Jordan looked towards Evilene since, even if not punched, kicked, and dealing with that kind of bullying, she felt powerless.

Then to have to deal with it again and now social media is involved? You’ll feel bad for this up and coming generation. Whether you are related to one of them, or they are your friend’s kid.

While by no means an unknown, he’ll be playing young Simba in the upcoming Lion King, I didn’t know who JD McCrary was but, like Martin, he definitely made a name for himself with this film. Not to the point of eclipsing her, or anything like that, but the way he was presented was similar to how some movies note “Introducing -” in the beginning. This felt like a small, but notable, introduction to McCrary on a bigger platform. 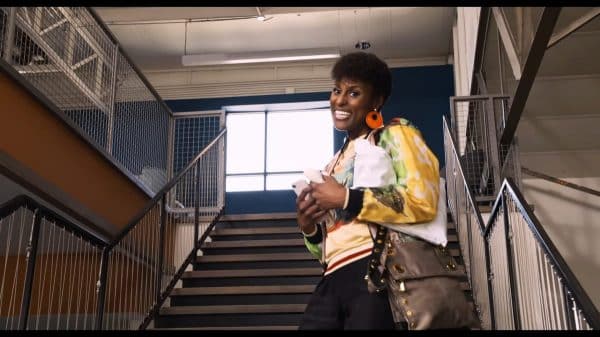 Issa Rae is a national treasure. One who hones in on her awkwardness to make her relatable in nearly all situations. However, as April, Rae becomes relatable since she is someone clearly brilliant, since she graduated with honors, yet struggles with what a lot of brilliant people do: Communicating such brilliance. Especially in a world with Jordan types who, whether men or women, can be intimidating and rather present tough love than a nurturing environment.

Making it so, as you see her grow comfortable and become a boss her way, it touches your soul a little bit. Makes you wanna shed some happy tears and shout something at the screen in approval.

There is always a need to shout out Black love when you see it, as well as a Black man who is good to his woman even when she may not always act deserving of it. Yet, despite how distant Jordan sometimes seems, Trevor works with what she is willing to give. Rather than leave because she clearly may just like him for sex, he is in it for the long haul. Ultimately hoping, as he shows he can be consistent, emotionally reliable, and in love with her boss side as much as when she is goofy, she’ll eventually let her guard down. Add in how he acted when he thought mini-Jordan was adult Jordan’s child, Luke James will likely be added to your bae list if you are into dudes.

The Bulk Of The Movie Happens In 48 Hours

April going from mousey to capable of handling a pitch meeting? 48 hours. Jordan undoing 20 some odd years of becoming like Evilene, keeping herself distant, walled up and an ass – 48 hours. Which isn’t to say people can’t change quickly when it’s either that or she could end up broke and losing everything. It’s just not realistic.

Then again, a donut truck vendor’s eccentric daughter, with no powers, wished Jordan was little, and her wish came true for reasons unknown.

What I love about Little is it figured out a way to find the spirit of what it was inspired by and truly just be that. It isn’t a remake, doesn’t feel like it is sucking off the name recognition of Big but simply paying homage. But from there, is entirely its own thing. A movie featuring different types of Black women, whether they are 13 or in their 30s, established or starting out, alongside meek or aggressive. A combination which, when it comes to Black women, doesn’t feel seen often enough – especially in movies.

Leading to why this is rated positive, and recommended – simply put, this film doesn’t really have peers right now. As said during the press tour for this, outside of Crooklyn, you’ll be hard pressed to find another mainstream film featuring a young Black girl like Marsai Martin that allows them to shine as she does in this film. Then, when you add Regina Hall and Issa Rae, honestly you get what feels like could be a classic. The kind of movie you watch with your kids or teens when they are of an appropriate age for some of the innuendo.