This odd coming of age comedy may be a bit weak in terms of story, but it still makes for a pleasant experience.

At 18, Taylor has led a very uneventful life. Friendships don’t really exist, there are no exes, he doesn’t drink or do drugs and in a family of artist which do both regularly, it makes him a bit of a black sheep. Then, to make matters worse, he has issues with his heart that make it so, if he becomes too overwhelmed, he has what appears to be a heart attack.

But, said feeling is more than welcomed upon meeting Krystal. She is this woman who has lived and not like Taylor’s boss Vera but lived a hard life. I’m talking drugs, alcohol, drama with her child’s father, and a past in sex work. Also, her son is paralyzed because of her child’s father. Yeah, despite going to AA and seemingly being on track to get her life together, Krystal has a lot going on. Yet, Taylor finds her enrapturing. To the point this 18-year-old boy decides to stalk and press this probably mid 30 to mid 40-year-old woman for the time of day.

Thus leading to him taking the inspiration his artistic brother Campbell, poetess mother Poppy, and spiritual father, Wyatt, have given him in life to woo Krystal. Of which has mixed results.

It’s More Comical Than You’d Think It Would Be 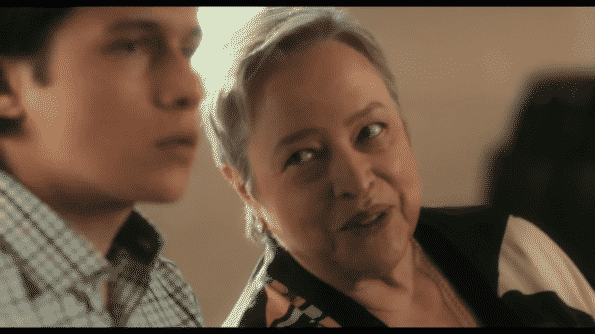 Between Taylor’s family and Krystal’s ex Willie, you are going to laugh much more than you may expect. Not loud, boisterous, and hardy laughs, but the kind which, with mouth closed, will force you to blow some air out your nostrils. This mostly will come in the form of Wyatt and Willie, as well as Grant Gustin playing the devil. It is hard to explain but believe me, Willie and the devil’s scenes are probably the funniest things in this movie.

Though, of course, Kathy Bates as Vera also is giving the occasional joke to tickle you. But she’s barely in the movie to really be a truly notable force. And, before I forget, Dr. Farley, who really seems a little too complacent at his job, will also crack you up a little bit.

We have an addiction, a deadly heart disorder, perhaps an affair, abusive ex, and a lot of other dramatic elements in the film. However, even with the reveal that one character is dying, none of it you’ll be able to take seriously. Mostly because the script is hard to take seriously. Such as the idea of this 18-year-old boy, barely off his mother’s breast, wooing a woman who got a whole lot of stuff going on. Now, don’t get me wrong, Taylor is a nice guy but can you imagine a boy who lives with his folks, even if he does have access to some money, being able to impress a nearly 40-year-old woman? But, maybe the real problem here is that, despite all these different things which deserve to be taken seriously, the film honestly doesn’t want you to. It simply may wish to push you should live no matter what and always try to better yourself. It doesn’t matter if your past is dark and generally looked down upon, go mess around with an 18-year-old. Hey, you got cancer? Well, it doesn’t mean you can’t still laugh, joke, and have fun. What about possibly messing around with hookers and addicts? Well, how else will you get to know the people unless you are amongst the people who would need you the most?

In order to see the weak points of the film as acceptable, you got to change your expectations of how dark and serious they should be. For, in the end, to get through life you have to find a way to laugh. Which seems to be the idea here.

While enjoyable because of the comedy, which I should note includes what sounds like ridiculous southern accents, the dramatics elements all fall short. But, how terrible they are to you will highly depend on how willing you are to adapt them to set up a joke. Which is why this is being labeled as “Mixed.” With the movie selling you one thing in the trailer and requiring you to shift your expectations, by lowering them, to enjoy the film, I’m not saying don’t see it but you will have to come with an open mind.