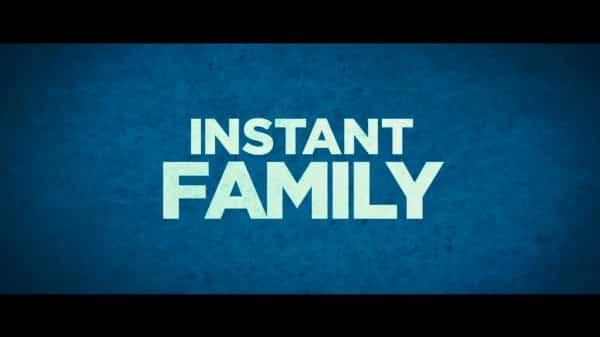 Instant Family offers it all. Vulgar comedy, touching moments that make you cry, and compelling viewpoints on fostering and adoption.

In their mid-30s, 36 specifically for Pete, he and his wife Ellie seem to have a good thing going. They have a house flipping business that is doing well and their marriage is stable. However, with Kimmy, Ellie’s sister, mentioning having kids, and her husband, Russ, teasing the idea bringing it up will cause Pete and Ellie to fight, it forces a real conversation. Especially after Pete mentions adoption, which Ellie looks into it. Leading to them talking to Karen and Sharon, two caseworkers, and having three kids in their home.

Something which starts off good, at first, but then each kid starts showing who they are. Juan, the middle child, who has dealt with abuse in the past, freaks out repeatedly. Lita, the youngest, who seemingly has picked up a lot of bad habits, flips out on the regular and Lizzy? She shows why many are fearful of adopting a teenaged child.

Yet, this film isn’t The Orphan

. It doesn’t try to stoke fears nor is it trying to be like The Blind Side

and show how such a noble act can lead to karma repaying you. What Instant Family does it keep it real with you. Showing the good moments, like when they first call you mom or dad, alongside when they say they hate you and maybe their biological parents show up trying to get them back. Giving you quite the rollercoaster of emotions.

You know how in most films, comedy or otherwise, only one actor gets to shine? Instant Family doesn’t play that. Everyone is hilarious. From characters nearly in every scene down to October, who has only a handful, everyone gets a laugh out of you. But, off hand, the funniest two of the film might be Karen and Sharon. Mostly because they are a polar opposite comedy duo and then when you add Octavia Spencer saying and doing the type of stuff which requires a double take! You are shown how diverse of an actor she really is.

I say that since there aren’t a huge amount of actors who find themselves easily transitioning between comedic roles like this and doing ace work in dramas. So with every line that Sharon had to pull Karen back, so she wouldn’t go too far, you will be cracking up. But, of course, others are hilarious as well. Naturally, Byrne and Wahlberg hold a certain oomph to remind you this is not an ensemble movie, even if nearly every character is given a chance to shine, and Gamiz as Lita.

Let me just say, I can’t find how old this kid is, but she definitely is going to have a long career. Mainly due to the fact it seems she rolled with every aspect of Lita’s personality and her issues. Before Pete and Ellie got her and her sisters, it seems Lita was in a verbally abusive home and somehow Gamiz balances making the messed up things said to her character funny, while you not forgetting how that probably screwed her up a bit. You know, hurt her little feelings. But it’s not just in laughs but so much more Gamiz, and the rest, offer us.

Again, this film is very equal opportunity. You want a role, well you better prep to either give us a sob story or be in a scene with someone who will break you down. Taking note of Juan, as much as him saying “I’m sorry” could be seen as comedic, with him flinching and how skittish he can be, yet still willing to reach out for a hug and trust people? That boy will have you crying. But it isn’t just him, or watching Lizzie deal with the opposite, having difficulty believing someone would want to love her. Especially without wanting something from her. Even, again, small roles like Pete’s mother Sandy, they hit you a bit as well.

With Sandy, she doesn’t make it 100% clear what she went through, but you can tell she identifies and connects with Lizzy because of it. Heck, she basically is an older, white, version of Lizzy considering how she acts at Lizzy’s soccer matches and then how she is when it is family time. And, in general, you see every person come in with some kind of baggage. Some have lighter loads than others, but as everyone shows they are willing to share, maybe help people sift through their stuff, you realize how much everyone compliments one another. Ultimately giving you the feeling, they might have not known it before, but they needed someone like the other person in their life.

The Frustration of Fostering/Adoption

As shown by Kim and Russ, there is a certain stigma around adoption. From there, we have Karen dropping stats and reminding you how difficult it can be to take on another person’s biological child and bond with them. Possibly bond with them and forget the point of fostering is family unification. Even if you and the child get a routine going and it seems the parent is just out of the picture.

But ooo, the biggest frustration seemingly comes with both sides putting away their representatives and showing who they are. In that, we get a combination of the two highlights above and it leads to a lot of complicated moments. You being called mom or dad the first time is balanced out with screams of someone hating you. Maybe even being reminded, despite all the maternal or paternal things you do, you’re not their “real” mom or dad.

Also, you have to deal with everything they went through and confront it. Whether or not the kid went through something, you pitying them doesn’t equate to properly parenting them. You pity strangers and kids pushed in front of cameras for charity commercials. These kids in front of you need time, attention, and effort beyond tears, pats on the head and being told: “It gets better.” Something which requires a huge amount of work and it really makes it so this film feels like an introduction to what comes with fostering or adopting. You will not be hailed as a saint. Some may look at you as such, but there is the possibility you will go through hell until the kid not only trusts you but thinks you’ll provide them with consistency. That you aren’t going anywhere, no matter what they may throw at you. Something that won’t come overnight.

I truly do love this movie and recommend it because it offers so much. For those interested in adoption or fostering, it feels like an honest approach to it. All the while giving us a sort of worst-case scenario that can turn into one of the best decisions you made in your life. Like most things in life, it is based on perspective. But, alongside giving some insight, you get a whole lot of laughs and also far more tears than you might have been expecting.

Hence the positive and recommendation label. Instant Family exceeds expectations. It isn’t a sob story featuring a bunch of Latin teens and their white saviors. Pete even addresses fearing them being seen like that. Also, it isn’t a comedy which brushes past what the kids go through or make it seem fostering, or adoption, is either easy or pure hell. What we get is one of the few productions which say it is based off a real story which doesn’t seem to embellish to the point you want to call BS. Giving you perhaps one of the best, well-rounded, comedies of the year.