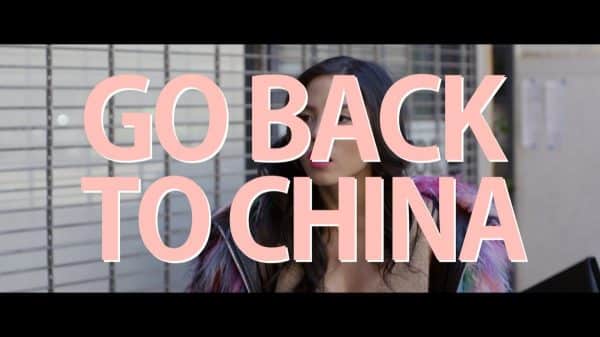 While “Go Back To China” may come off as some silly or light-hearted, as it touches upon Chinese culture and family, it goes so deeper than expected.

Sasha, a fairly recent college graduate, was raised in a single mother household due to her father, Teddy, being a successful businessman and a hoe. One that abandoned her and her mother, in a similar fashion to how he abandoned his oldest daughter, Carol. But, in his old age, with him thinking of his legacy and how his daughter has spent nearly half a million dollars since she was 18, he coerces her back to China. This is all in an effort to not only have her experience the work that allowed for her trust fund but to gain much-needed experience. Alongside being closer to the family he made.

What the trailer doesn’t push as it should is that there is far more to “Go Back To China” than a spoiled girl who gets cut off and her father who wants her to grow up. It is very much about family, and this desire Teddy has to make a connection. Which, for him, is hard since he comes from nothing. So, with that in mind, it makes every mistake, every loss, every failure a huge thing since he is old school. He sees his role as a father to be about being a provider. As for all the coddling, pats on the head, things of that nature, that is for the mom to do. Hence him having multiple baby mommas and often abandoning them in the United States.

But, with seeing Sasha and her older sister Carol, as well as their youngest sister Dior, and hearing each of their unique relationships with Teddy, it gives this film depth and weight you may not expect. Specifically, it gives you three takes on how Teddy’s inability to parent has affected his daughters, especially considering how some of their mothers are.

Plus, there is the fact one child was usually produced by a mistress, and with that, you have the complicated relationship Carol and Sasha have. Also, there are their younger siblings, Dior and Christian, and finding a means to not only connect with them but push Teddy to break the cycle.

Teddy Is Far More Complicated Than He First Seems

At first, Teddy could seem like a man who pulled his bootstraps up, and as soon as he got the taste of the good life, he decided to live as a rich man and do as rich man do – buy beautiful women, have kids, and work hard to afford them and his lavish life. However, while status does matter to Teddy, as we see him value his daughter’s expertise and how he treats workers, we’re reminded that, while he has come far, he hasn’t forgotten where he comes from. It’s just, due to the way Chinese society is, there is a certain way he feels he must present himself to be respected. Be it because he is the boss or, due to him only being a handful of decisions separated from the position his workers are in, the need to set an example.

And this isn’t to excuse him seemingly paying a young girl who is 22 as his girlfriend or how he speaks to people. It’s just, as with Sasha and so many characters, Teddy is allowed to be more than meets the eye and is given layers.

Once again, this topic deals with how, on the surface, “Go Back To China” could sell you one thing, but the message can go deeper. This time around it is about Sasha coming to China and speaking on the working conditions of Teddy’s factory compared to what she’d expect in America.

Now, do the people work hard and long hours? Yes. However, what Sasha doesn’t take much note of is, despite it being mostly sustenance, Teddy does feed his employees – a privilege that is by no means the norm for anyone but school-aged children and those who work in corporate settings. Also, while Teddy does go off on his employees, it seems there is more in the way of profit-sharing and willingness to invest in the individual. Two examples: Teddy pays for some of his workers, like those who are Filipino, to go home once a year, and has even hired people he didn’t need due to hearing their story.

And while Teddy’s way of doing things doesn’t represent how things are in every Chinese factory, it does present the vibe “Go Back To China” wanted to present the good and bad of China and help those see it as much as someone’s home, as films set in the United States would. Meaning, yes, are there policies and belief systems that seem outdated or make no sense? Yes. However, there are people and a culture which make the flaws of the society quirks in what is overall a wonderful place to be.

What makes “Go Back To China” worth seeing and recommended is because of how surprisingly good it is. Which, I know, sounds like an underhanded compliment, but that’s because the trailer undersold what you ultimately get. For whether you are talking about the family dynamic, Teddy as a character, Sasha’s growth, a depiction of a Chinese factory that wasn’t outright negative, it gives you so much that is unexpected. Leaving you pleasantly surprised and enjoying the hour and a half you spend with these characters.

Teddy Is Far More Complicated Than He First Seems - 88%