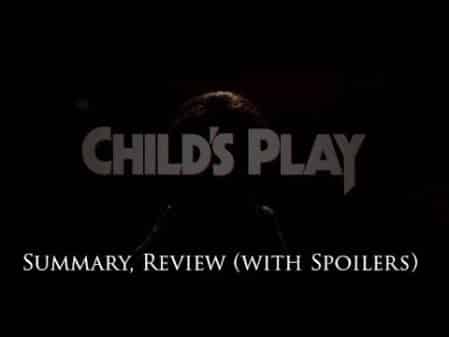 In one movie, Child’s Play (2019) does what the original franchise consistently attempted to do: Be both horrifying yet comical.

As with the original Child’s Play, Andy is an only child being raised by a single mother. The only difference now being his mother Karen has a notable personality, a boyfriend, and we get to see her at work. But, with having a kid who is hard of hearing and doesn’t socialize much, this naturally worries Karen. Particularly due to her often working double shifts and, when that isn’t happening, she is trying to show and get affection from her boyfriend Shane.

But, one day, after blackmailing her boss, she gets a brand new Kaslan Buddi doll. One which does so much more than the dolls we grew up with. This one connects to the cloud and can be both your child’s friend and a personal assistant. One which, in the case of Chucky, can become very possessive. Especially when other people threaten his friend or make it so they can’t play anymore.

Previous to this movie, there have been 7 films featuring the killer doll named Chucky. Of which, 3 were rooted in horror, 2 were comedies, and then we got 2 which tried to balance things out. Most would agree that while the first Child’s Play was awesome, as well as Bride of Chucky, the others lean more towards milking the brand than creating notable entries. Child’s Play (2019) changes that

Strangely, in the hands of two men with less than 5 released productions previously, they do what Don Mancini struggled to in nearly 20 years – they balance both of the selling features of Chucky. Seemingly taking note of what worked from Mancini’s fine-tuning of the character and giving you all the successes minus the arguable failures.

With the exclusion of the whole doll possession and Charles Lee Ray, what we get is a child’s toy which is supposed to be programmed to imprint on a child, love a child, and keep its words and actions G rated. However, with the Asian man undoing those protections, we get comedic moments of Chucky saying some very R rated things. All of which Mark Hamill, I’d submit, brings a bit of his experience playing The Joker for nearly a quarter a century to.

Yet, not to be outdone, with Karen’s role being expanded comes Aubrey Plaza bringing her deadpan humor to the film. That and clearly not being any form of the perfect mom as she struggles to raise a semi-well adjusted kid on her own. Oh, and to a lesser extent, Brian Tyree Henry gets a few jokes in. Not enough to argue he was the funniest character, but his contribution is worth noting.

The best thing about how Chucky is modified is that instead of just being this adult psycho in a child’s body, he is AI. Chucky connects to the cloud, can control devices, cars, send his voice through anything, including Andy’s hearing aid. Which makes it so, as he gets possessive of Andy, you don’t just have to fear the jump scares but the tone Hamill creates.

Chucky Is Back To, Mostly, Being Animatronic

Which, when combined with the fact Chucky is animatronic, it really makes your skin crawl. For while it may not bring on the paranoia the original Child’s Play brought, the way this version is, I’d submit it could be part of the Black Mirror universe. Particularly as Chucky learns to control his face, his arms, and then when you take note his physical movements are barely, if ever, CGI, it makes the fact dolls like him could come out within 5 to 10 years all the more horrifying.

How It Is Different From The Original

First and foremost, getting rid of the whole voodoo nonsense and just making Chucky an AI doll was brilliant. Why? Well, for like many horror icons, it allows you to almost feel bad for Chucky. How? Well, essentially, Chucky murdering people, and a cat, is due to them either hurting Andy or getting in the way of them spending quality time together. Which, considering Chucky is made to imprint and bond with one person, it makes it seem misunderstood – at first.

Granted, it evolves into a possessive little bastard, but that isn’t entirely Chucky’s fault either. As noted, he is AI, and as we’ve seen from most media depicting artificial intelligence, they learn from their master(s) or creator(s). Chucky is no different. By being exposed to Karen’s toxic relationship, that is how Chucky learned what love is. With Andy exposing Chucky to those who celebrated his ability to curse, wanted him to do violent things, and seeing Andy laugh as people died in a horror movie, what we’d call negative behavior was made to seem acceptable. Especially since, rarely, did Andy redirect Chucky.

So, ultimately, the psychopath Chucky becomes is less the fault of some disgruntled man in Asia and more so Andy and Karen’s fault for not taking raising an AI doll seriously.

It’s Light On The Details

As noted in the questions above, the film isn’t trying to give you too many details. For example, how in the world did Kaslan industries get so big they make nearly every home system we encounter? Who knows? What happened to Andy’s dad? That’s not revealed. Never mind how Chucky actually works, and is his battery capable of losing a charge? That is never gone into.

What we get is just enough story to set up the horror, but also a story far beyond what has come before in the franchise and really putting Mancini on notice if he truly will launch a TV series in 2020.

Most horror reboots seem to solely be about restarting the franchise solely for the sake of money. Child’s Play (2019), on the other hand, seems like a labor of love from two people who know the franchise, studied it, and took all the best parts of what was done and put that all into one movie. One that is modernized to fit the potential fears of new audiences, while staying true to what has made Chucky the icon it is.

Hence the positive label. Child’s Play (2019) deserves a pedestal and should be an example as to how any movie rebooting a decades-old franchise should be handled. And honestly, as much as sequels usually are subpar, I’m actually interested to see what Chucky could have planned when the Buddi II is released.

Chucky Is Back To, Mostly, Being Animatronic - 85%

How It Is Different From The Original - 95%