Wherever I Look
Recaps, Reviews, and So Much More
Home Movies Anna (2019) – Summary, Review (with Spoilers)
Movies

Anna, while above your generic Russian spy movie, seems like a direct to VoD release that somehow ended up in theaters.

Anna, a Russian citizen, had the worst kind of life a person could have. One in which you once could be considered privileged due to your parents being active in your life, them living well, and then suddenly that is all taken from you. Thus leaving Anna teetering on the streets, living with a criminal, until Alex comes into her life around 1987. From then until sometime in 1990, Anna is a KGB agent who is trying to make her superior Olga happy, despite her reservations, and keep the head of the KGB, Vassiliev from having a reason to put a bullet in her head.

Her cover? Being a queer model, living with a woman named Maud, and assassinating whoever Olga tells her to. At least until the CIA catches her tail and she is coerced to work with Lenny unless she wants to end up either in a cell or tortured. Thus leaving Anna, barely 21, between a bullet and a prison cell. Leaving you to wonder, between her life before the KGB and during, did she learn enough to craft a third option?

It Was More Compelling Than Expected While Anna won’t make up for Luc Besson’s Valerian and the City of a Thousand Planets, nor become a classic, I will admit in terms of rebuilding his name it is a step in a positive direction. The way Anna is written mirrors many of Besson’s female characters in which endurance of spirit is the driving force and with knowing her struggle comes a personal investment. Not in terms of fearing her dying or getting seriously injured, but over the course of two hours you won’t find yourself checking your phone.

I’d attribute this to Luss and Besson knowing how to balance out having Luss be this, sometimes, heartless KGB agent, yet clearly having PTSD and building her as someone who only does what she does to survive. All in hopes that, if she lives for 5 some odd years, maybe, just maybe, she could live in peace. Not the life she had as a child, but at least not having to kill people for a living or sleep with them to maintain a cover or for long game manipulation.

The Action Scenes Are Way Too Polished

Throughout the film, Anna does more than simple assassinations. Whether it is the tryout Olga has her do, which forced her to take on a full room of bodyguards or a scene towards the end, there are times when we see her really put her training to use. The problem is, when it comes to those scene, there is more oomph in the sound effects than the actual violence.

What I mean by that is, there is no wincing as you see Anna shoot or harm anyone. Everything is handled as a perfect dance with no room for a sense of humanity or emotion. It is just all choreography of Luss, or her stunt double, shooting him, kicking that guy, grabbing this prop to kill a few people, and even when Anna seems to make a mistake, it seems well planned. Add in the guys she fights sometimes dying in rather over the top ways, and what should be one of the highlights becomes a criticism. 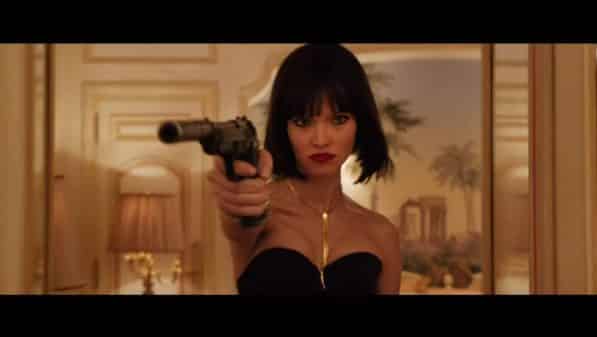 In a similar manner to The Perfection, there is a huge amount of time jumping in this movie. Often months back, years back, to explain what we just saw. Now, unlike The Perfection, the jumps don’t necessarily take you out of the movie or ruin twists. However, they are done so often that when you see a screen saying “Three Months Before” or another amount of time, it loses its luster. Much less, if you aren’t paying attention, it could throw you off in terms of the timeline.

Anna certainly isn’t a must-see film by any means. If it’s available as part of something you already pay for, I’d say it is worth watching if you have nothing else to. However, to pay for it on its own, at the prices these theaters charge – especially if you don’t see it at matinee prices or with a program similar to A-list? It isn’t worth it.

Leading to why this is being labeled as mixed: Anna is a forgettable action movie and while it is a smidge above most Russian spy films, the action lacking grit, and time jumps, make it so while it may appeal to some, we can’t give any generalized guarantees. Even when you consider Anna’s story, Helen Mirren’s performance, and the handful of twists presented.

The Action Scenes Are Way Too Polished - 65%

It Was More Compelling Than Expected - 80%