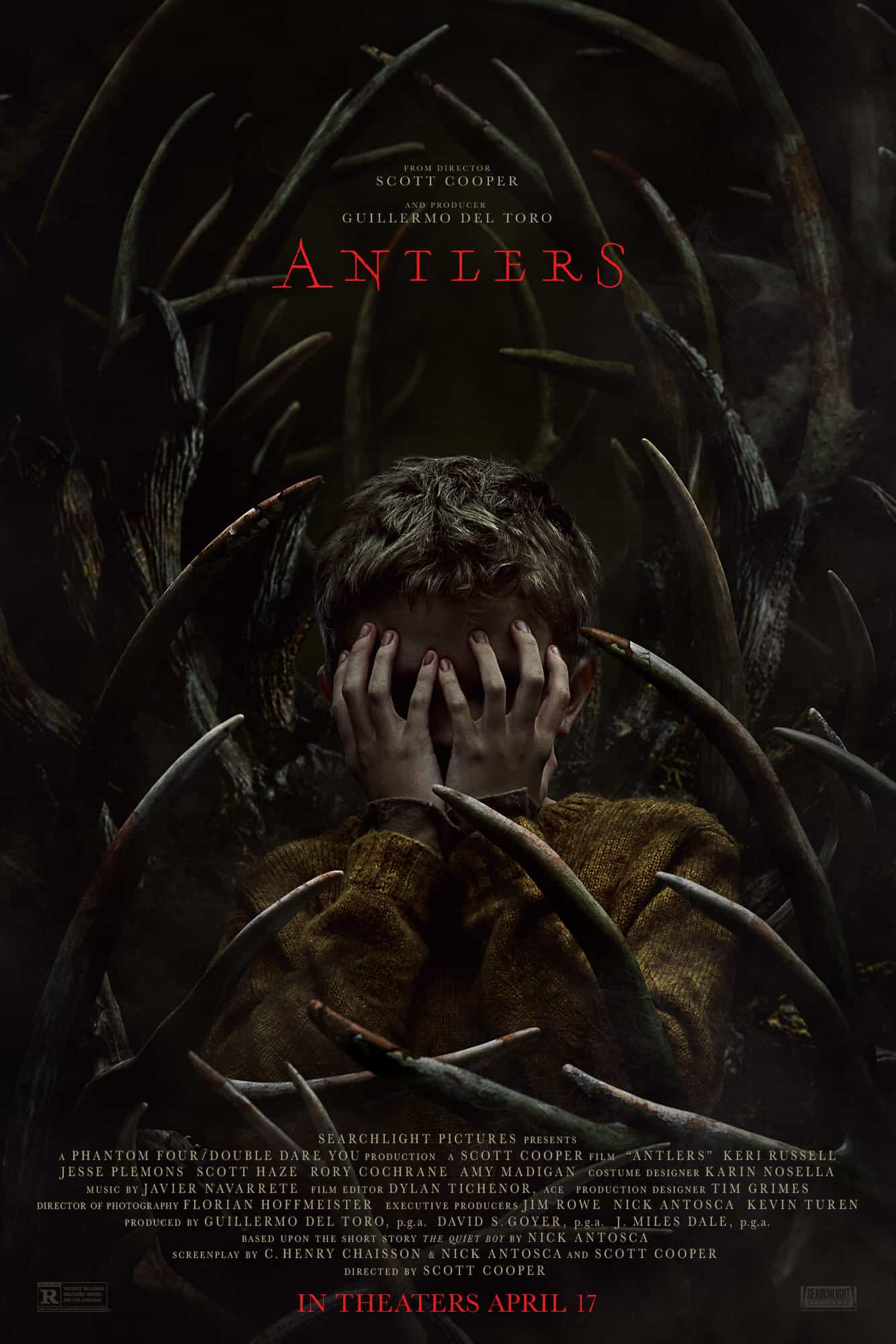 Antlers is notably gory but avoids its compelling storylines to deliver a forgettable horror movie.

After leaving Cispan Falls for more than 10 years, Julia has returned home, and all she is reminded of is why she left. Whether it be haunting memories of her father, the lack of vibrancy of the economically depressed town, or a community that is plagued by the opioid epidemic. Yet, her brother Paul is still there and is the sole reason for her return.

But this movie isn’t about a sister and brother reconnecting as much as it is about Lucas, one of Julia’s students in her English class, dealing with his father and brother, who he says is “sick.” However, if you believe local legends, they aren’t sick but rather possessed by a Wendigo.

It’ll Cause A Fright

There are the occasional jump scares and loud noises that honestly might be the main things keeping you from falling asleep. That and the time it takes to get adjusted to the graphic imagery you’ll see.

Can small towns be creepy? Absolutely. However, one of the many issues this film has is it doesn’t give life to the small town. It just writes it off as a place where the industry that made everyone money left, so now it’s poor. Also, it is plagued by the opioid epidemic and a litany of terrible things. All it does is give you stereotypes, and while it doesn’t go so far as to have people missing teeth and the more insulting tropes, it just doesn’t give you much of a reason to care about the town.

The same can be said about nearly every character. It’s established who someone is, ranging from Julia, her brother Paul, to Lucas and his family, but no one is developed to the point that you genuinely care if someone lives or dies when the monster moves about. Add on the monster just comes around right before you are about to fall asleep and, it makes an hour and a half seem so long.

You Can See A Potentially Deeper Story

What’s weird about Antlers is that you could totally see this being a small-town drama without all of its horror elements. Julia is returning to a home where she suffered so much abuse at the hands of her father, and she left as soon as she could, without her little brother, who was left to deal with being their dad’s new target.

On top of that, you have this kid whose dad cooks meth, whose mom is dead and is just trying to keep his little brother alive. To me, that might still be a tough story to watch, but at least it could have brought on a sense of horror through trauma rather than cheap thrills through a murderous mystical being.

Yet, it is almost like Cooper and his peers couldn’t get that story sold, so they retooled this into a horror film so that some piece of their original vision could get greenlit.

There is an underlying good story here, but rather than focus on a sister’s return and her unpacking her trauma with her brother, while she takes note of a kid who has it as bad as she did, if not worse, we got a mystical monster horror movie. One that wastes any and all of its potential in order to set up graphic scenes and a monster on the loose plot. All of which makes for a film you shouldn’t watch in the dark, for rather than it making things scarier, it’ll just make it harder to stay awake.