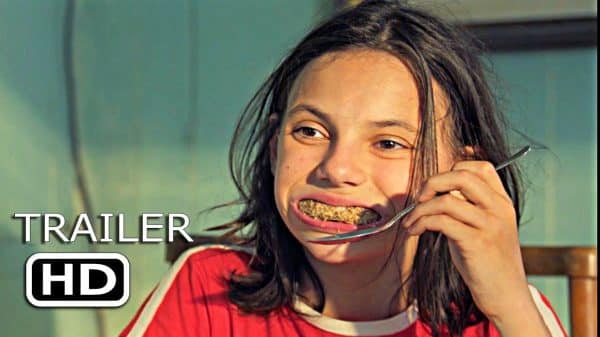 “Ana” is a cute movie that further proves Dafne Keen, of “Logan” and “His Dark Materials” fame, is likely to be first billing for decades to come.

In post-Hurricane Maria Puerto Rico, we follow an 11-year-old girl, Ana, whose mom has just been taken to jail and the only refuge she can find is a car on Rafa’s lot. The problem with her hiding there is her and Rafa don’t have any kind of relationship. Yet, throughout the film, through trials and tribulations, Ana tries to find a way to have a place in Rafa’s life and keep from being turned over to social services.

Full Disclosure: I’m a Daphne Keen stan and believe Keen isn’t following Natalie Portman’s career to a T, by any means, but I would definitely say the foundation she is building is diverse like Portman’s. For lest we forget, Portman’s pre-teen and teen years were a bit all over the place and you can say the same for Keen. Between “Logan” and “His Dark Materials” alongside now “Ana,” we have seen her in action, fantasy, and now a comedy with some dramatic elements. The combination gives us this spunky young girl, who plays off adults well, yet knows how to become that innocent child when the scene calls for it.

For example, many times in “Ana,” Keen has to manipulate adults to survive. Be it in the form of speaking with a demure voice and using honorifics when talking to adults, or taking advantage of her perceived innocence as a means to keep herself from being homeless or to hustle. Which, in a way, may seem comical, this short 11-year old telling a grown man he needs to learn to hustle, considering he is a used car salesman, but while he knows how to hustle legally, she knows how to do so illegally. Thus helping you understand, in Ana’s world, what is required to survive, especially after Hurricane Maria.

Speaking of Hurricane Maria, another thing you have to appreciate is how “Ana” addresses all aspects of post-Hurricane Maria Puerto Rico. You have the people trying to profit from it, like Rafa, among others, you see the flooding and people trying to find ways to survive, and the movie doesn’t show just one kind of Puerto Rican in any type of role. From those who are fair to dark, we see them working, going to church, sometimes interacting with Ana and Rafa, and other times not. Also, there is an acknowledgement not all of them speak Spanish and some don’t speak English as well.

I’d say, in many ways, while “Ana” is probably the most diverse depiction of Puerto Rico in recent memory. With the only other production with any real notable budget being the second season of “She’s Gotta Have It.”

The plot focuses on two things, the first being Rafa owing someone named Diego $5,000 and Rafa, who may not have played a large part in his two sons’ lives, partly raising an 11-year-old girl. Now, while Keen is wonderful and she plays off of Andy Garcia well, there comes the point in their back and forth where you’ll be checking how much time is left.

This is mainly due to, even with Rafa only having a few days to get Diego his money, the film not spending those days to really allow us to get to know Ana or Rafa. We get surface-level information like Ana isn’t close to her dad just as Rafa isn’t close to his boys. But other things, like what exactly was the crime that got Ana’s mother arrested or was it only tax breaks that led to Rafa moving to Puerto Rico from Florida? That isn’t gone into. Making it so the film relies heavily on the charisma of the actors than the strength of the characters.

Setting aside how much I adore Keen as an actor, let’s be real for a moment: It is her charisma and presence more than her acting abilities that make her great. So with “Ana,” I would not say she is the best actor, nor would I say Andy Garcia makes her appear better or she makes him better. I’d instead say they enhance each other’s presence to the point you can forgive the film’s shortcomings.

Which is what I’d expected. Especially for a film that, if you didn’t subscribe to indie newsletters or sought out movies like this, you’d never know about.

What makes “Ana” great is that it is rooted in what is happening to Puerto Rico and never forgets how much the events after Hurricane Maria affect its characters. They don’t just use the tragedy to set the tone and move on, there is a consistent reminder of how that changed people’s lives, for many in the worst way, and now many are doing whatever they can to survive. But also, like Rafa and a pastor named Helen, people are taking advantage of Puerto Rico’s laws and government to profit from the island.

This combination, alongside Keen and Garcia’s charisma and chemistry, helps the film in many ways. However, with the story overstaying its welcome, even what they bring isn’t enough to make this something we can firmly say is worth seeing. Hence the mixed label and us feeling this film is a bit too divisive to recommend for a general audience.

After pretending in an ever-escalating story her legs were broken, Ana learns Pastor Helen has no desire to give her the cut Ana was supposed to get for this masquerade. Instead, Pastor Helen is going to use the money from Ana’s story, which was inspired by one Rafa told her, to fund a local politician’s re-election campaign.

Well, Ana records this being told to her and uses it so that she can get $30,000 in cash which helps Rafa pay off his gambling debt to Diego, buy new – used cars to sell, and it seems to help Ana’s mother leave her deadbeat boyfriend once and for all. Thus Ana finds Rafa to become the male figure she never had, and Ana becomes the daughter, or perhaps granddaughter, Rafa has never had. One that pushes him to reconnect to his sons, which he does, but not for viewers to see.

It’s unlikely to happen but we could see how life is after Rafa reconnects with his sons. Also, with Ana having dreams of going to the continental United States, they could show her possibly living out there, going to school, and maybe struggling since her school has been shut down for months. Plus, with us seeing Ana bullied a bit in the movie, we could get an idea of how much Ana’s upbringing has not prepared her for life outside of finding ways to survive vs. thriving. Then with Rafa, we could learn why he left Florida for Puerto Rico and whether his sons or their mother has to do with it.