In “The Planet Is Burning,” Ilana Glazer speaks to her people and her core audience. If that isn’t you, I can’t necessarily say she’ll win you over.

From talking about being Jewish and her upbringing, jokes about her sexuality, and her friends, to the gender binary and diva cups, Glazer talks about what you expect her to. At least if you are familiar with her activism or her role on “Broad City.” Making it so, while she notes, perhaps jokingly, how she wants to create a notable difference between her “Broad City” character and herself, by the end, you realize the only difference is Glazer can hold a job and is married.

Her As A Storyteller/ Performer – 85 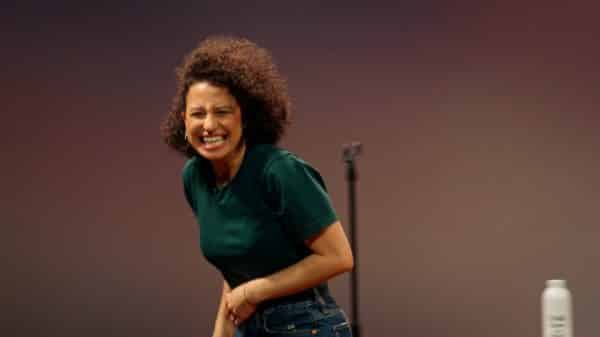 When it comes to certain topics, like using a diva cup, her reconciling her brand of feminism and being a wife, and how Nazis had many gay tendencies, Glazer is ace. I wouldn’t say she made me laugh, more than once, but you can see where she is going, the punchline, and appreciate her point of view. All because Glazer tells stories with such passion and vigor that you can tell that, whether the type to go off the cuff or write out her jokes, Glazer believes what she says and thinks it is worth sharing with her found community. One that she is under the belief gets her no matter how far left she goes.

The Need To Question If The Joke Isn’t Meant For You, Isn’t Being Done Well, Or Is Just A Bad Joke? – 72

But with that said, there are times where you are left thinking what she is saying is solely meant for the appeal of her audience. Whether it is referencing “Broad City” for a quick cheer, her takes on classic movies, or diving into how and why she doesn’t understand the term “No Homo.” When it comes to these topics, and quite a few others, they seem like internal thoughts she is still working out and despite this being a taping, she is still at the point of trying to figure if something is funny, can people relate, or is this just an Ilana Glazer thing?

And with that, as much as you should respect Glazer as a writer and performer, it feels like a lot of her ideas would have been better for a character who operated under the guise of not being her under a different name. A role that, rather than wait and see the reaction of a live audience, was playing off another character. For while I wouldn’t say Glazer sometimes seems like a child who captured the attention of the adults in the room, her energy is similar to that and while it keeps the taping lively, I wouldn’t say it creates anything resembling a “special.”

Would it be wrong to say I was disappointed? Mostly due to loving her as a scripted actress, so I had hoped that, as a live performer, we’d get that same energy and comedy. However, while the energy was there, it does feel like Glazer needs someone to be up there to play off on, maybe even guide her a bit, to be at her best. As many will tell you, comedy is subjective, and with so many platforms and avenues to make money with comedy, you can really stick to a niche market and still be successful. To me, Glazer focuses on her market of stoners, certain kinds of feminists, and those who make up the LGBT+ community – thus a taping that feels totally her in a raw, sometimes manic, way. Which for some will be just what they wanted but for others, it may push the idea she is better as part of a team than as a solo player.

The Need To Question If The Joke Isn’t Meant For You, Isn’t Being Done Well, Or Is Just A Bad Joke? - 72%

Her As A Storyteller/ Performer - 85%