The colonies are finally seen as well as an update on two favorites – Emily and Janine.

It’s time to head back into the past but rather than focus on June or one of her friends, the focus is on Emily. Particularly a time period, post the attack on DC, but before the civil war, when Emily was but a professor. One who, alongside colleague Dan, learned that the clock was rolling back on gay rights. Something which seemingly was to begin just with Emily moving from being in front of students to doing more research and lab work. However, as time went on, and Dan, a gay man, was found hung, it became clear it was time to get the hell out of dodge.

However, while Emily’s wife, Sylvia, and their son are allowed to escape to freedom, Emily is not, thus leading to her, eventually, ending up a Handmaid. Perhaps the two interesting things which came out of this were: 1. Emily trying to support a female student, Jenna, asking a question, and 2., Dan noting how good gay people of Emily’s generation had it in comparison to his. The reason why these were so interesting is, as noted in the last episode, women standing up for women slowly but surely deteriorated as Gilead made it where they all, nearly, have only themselves to look out for. So to see Emily go from helping a girl, who may have outed her to Dan or someone else of authority, sort of sets up a bit of a flashforward in a way. Since being outed, later on, is how Emily ended up in the colonies.

The second thing, Dan’s comment, is noteworthy because you don’t really see those type of conversations too often. That of, between gay people of different generations. That is, outside of coming of age tales like Call Me By Your Name, which has a slight predator vibe. So this rare moment of peace, conversing about their perspective on the changes, was quite interesting. Making me wonder if they may bring how other cultures feel about the changes. Especially ethnic groups which, as of now, aren’t represented in the main cast.

June continues to get moved around by Nick, making you wonder how, for a first timer, he is able to make all these connections? He is an eye, right? Why do these people trust him? But, that isn’t really something June is worried about. With her ending up in The Boston Globe, something long closed down, even before the civil war, she takes in what has now become a relic of history. Including taking note of the bullet holes and blood on the walls.

Which only strengthens her resolve to get out of Gilead, with Hannah, and to Canada. However, Nick, at best, has only thought up to keeping her hidden. Something which isn’t good enough for June so she has sex with him to help his mind become a bit clearer about what their shared goals should be.

As noted in “June,” when it comes to the character, she is goal oriented and is willing to give up just enough as required to get to her goals. Even if that means some tantric sex with someone she might be able to manipulate now, but one day may tell her enough is enough. For until that line is drawn, she knows how to push his buttons. She can grab that hair, lay it down, and maybe get her way.

However, while Nick somehow found a way to transport June this far, it’s becoming clear him sticking to himself, not schmoozing enough to really have clout, is only going to get June so far. And who knows if we may have hit the end of the line. 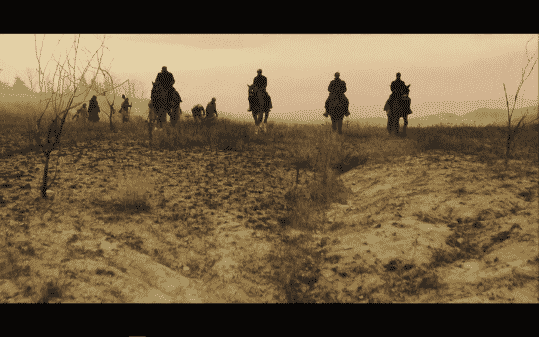 We finally see the colonies and they are quite bleak. All day people dig up to 10 pounds of fallout if they want to eat. The water they use is contaminated and the aunts aren’t like Aunt Lydia. They aren’t stern but still capable of being loving. They are just drill sergeants.

As for Emily specifically? Well, she shows us that the colonies basically work like a prison. Especially in terms of after the guards, the aunts, are away. There is an underground market of trading, an everyone for themselves mentality, and people dying by trusting the wrong people. Take former mistress O’Conner. She trusted Emily and Emily decided to vicariously seek vengeance through her in regards to her likely letting a woman get raped just so she could, vicariously her self, have a child.

Which, at this point in mistress O’Conner’s life isn’t a thing, since she turned herself over to god, but we all got to weight our sins and it seems Emily had decided to be judge and executioner. But, all is not doom and gloom in the colonies for Janine shows up and now Emily may have a friend.

Anyone else got the vibe, considering Emily’s background, maybe she was testing on people? I mean, with seeing that woman’s nail fall off, after Emily tried to help, I wrote that off as it just being the conditions of the colonies which caused that. However, with her killing O’Conner, so came the wonder if she is using the people in there as lab rats to eventually kill an aunt and try to escape. Especially since, with there being less people, only a few cars, and a few horses, the right kind of escape could mean real freedom.

In the novel, June’s mother (a strident feminist in her youth) is sent to the colonies. June has several flashbacks to her childhood and adolescence which show the ambivalence of their relationship and how June came to feel disillusioned by her mother’s brand of feminism.

This is the one aspect of the novel that the first season left out. I found it odd that in doing an adaptation that was ten episodes long, they left out this part of the story – which is rather important to June’s development as a character, and helps to give a broader understanding of the story’s world. Certainly they could’ve made room for it, there was a lot of fluff in Season 1 that could easily have been cut out without ruining the story.

Glad to hear that in Season 2 they are showing the colonies and following up on the loose ends of Season 1 – I just hope that we get to see June’s mother in the colonies at some point and get a flashback that details the mother/daughter relationship. It would go some way to answering some of the questions raised in the blog post above with regards to characterisation.