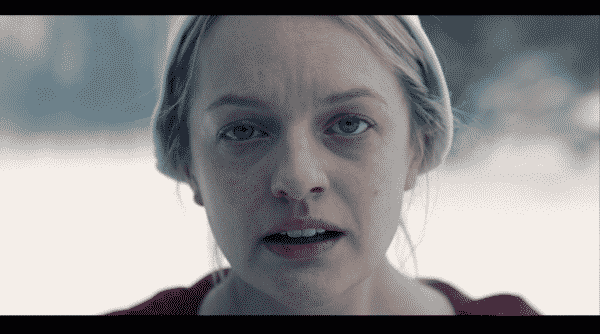 Desperate times call for desperate measures and June finds herself having to put her baby first as things become impossible for her.

With Nick dead and his body taken who knows where, June’s main focus is getting away from wherever she is at. Problem is, she has no idea where she is and doesn’t even know where to begin to get what she needs. Such as the key to the garage.

However, after spending a few hours digging and searching, she gets the keys to the garage, a car, food and is ready to go. Problem is, the garage door is frozen shut. Thus presenting what perhaps is becoming a pattern of sorts. June being right where she needs to be but one thing always holding her back.

Can we talk about the mansion real quick? Is it safe to assume it is one of the ones Hannah’s adopted parents own? Also, considering the looks of it, could it be a summer home? While I know the location may no longer be seen after this or the next episode, there is a need to ask about it because it fills us in on Hannah’s life. Is her commander higher than Fred? Do commanders usually have multiple homes, outside of their suburban one? Could this house be isolated for other reasons? These all are quite minor things, in the grand scheme of things, but even just the car, which I can’t imagine anyone driving in Gilead, brings about this weird otherness about the mansion.

Serena Joy knows what Fred did and she is pissed. Thus leading them to drive up into the mansion and look for June. Someone who is hiding away and, for a period of time, has a shotgun aimed at the two of them and contemplates shooting them both. After all, within the last few days, they raped her together. Something that Serena Joy, because she is out of her mind, says Fred did, as if it was only him participating in the act.

But, clearly, when it comes to Serena Joy, baby fever got her going nuts and it’s stressing Fred to the point of you thinking he may get violent with her again. Though the weird thing is, Serena Joy talks about her giving up everything, in some unspoken promise, just so she could have a kid. As if she decided to be a simple wife and wasn’t pushed out of the formation team of Gilead and coerced into a sub role.

Well, perhaps thinking that way is what keeps her sane.

I’m trying to imagine what would have happened if June did kill Serena Joy and Fred and stole their vehicle. Yes, likely in the summer, Hannah and her family would have discovered the rotting corpses but June could perhaps be free. Yet, as noted, there is something always holding her back. Hannah for one, but also trying to maintain some sense of her humanity from before she became a slave to Gilead. Which is perhaps the sole reason she didn’t kill them both because there would be no coming back from that. Killing a commander and his wife, alongside kidnapping a child, would mean she would have to end up in Canada. Even then, you know her being labeled a terrorist would mean any and all talks would probably have her name in it. So imagine what that would mean for Hannah’s life? With it being a patriarchal society, you can bet your bottom dollar she would likely pay the price for her birth mother’s transgressions.

June aside, Serena Joy has lost her mind over a baby that isn’t hers and one she knows June probably doesn’t want to give up. So lord help June when she ends up back in their care for now she has embarrassed Fred and Serena Joy twice, and now has leverage. How? Well, there comes the question of how did she get into the mansion of a commander’s home? Because, as much as Gilead seems to be about harsh punishments, let’s not pretend they don’t enjoy the act of interrogation as well. Add in June gives birth and, oh, you know they are ready for a whole slew of information to come forth.

The Joys and Pain of Childbirth: June

In flashbacks, we see June’s handling of giving birth to Hannah and how that prepped June to give birth to her own daughter without drugs and also doing a more natural position for childbirth. Since the way women often are seen, on their back in a bed, it helps doctors but is absolutely terrible for women. After all, they are working against gravity that way and it doesn’t really open up our stretch your lower bits to make things easier.

But, I digress, the point is, June gives birth and with realizing the food supply is limited, she can’t drive that sports car, and she wants a doctor to check everything is okay, she fired off two shots into the air. Mind you, before the birth but people show up eventually. Making it so another opportunity to get free is lost and back to Gilead June goes.

With knowing Fred eventually dies and Gilead falls, per Benjamin who often comments on episodes, so comes the question of when is that going to happen? If not, what is the planned end game here? Taking note this is the only Hulu program which gets any major recognition, so comes the question of whether they may drag this out until it just doesn’t make money or will they let it finish on a high note? Because, there can only be so many times June gets the chance to escape and either fails or decides to go back to Gilead.

Never mind there can only be so much we see her go through before it becomes stuff we are just accustomed to her being put through. I mean, it is like Game of Thrones

. After a certain point, they have to compete with their last outrageous moment and for this show, we see people get hanged and rape – there is no higher point than that. All that is left is the tears of joy from reunions and it all being over. Especially since what remains of the US seems like it can only maintain or defend – it can’t wipe out Gilead as we know it. Much less, other countries aren’t getting involved beyond sanctions.

Well, in terms of the Margaret Atwood comment, with her selling the rights and just being a consultant, not a writer, I figure they may speak to her when stumped but that’s it. Even then, she may think they have gone places past her imagination at this point.

As for keeping Fred and Serena, it could very well be a contract thing. It isn’t clear how many seasons they were signed up for so killing them off, or June disappearing from their lives, probably isn’t easy.

But, at this point, I just see it as them juicing the source material since this is perhaps Hulu’s only real claim to fame. At least in terms of original programming which not only gets good reviews but also awards. I’m not sure of its ratings off hand.

It amused me, in a meta sense, that June refrains from shooting Fred in this episode… in the finale of the 90s movie version, she kills him with a knife – and the filmmakers depicted the murder as totally justified, both as an act of personal vengeance and an act of political resistance against a tyrannical regime. I presume you weren’t aware of this?

You see, it’s differences like this that serve as a reminder that earlier versions of “The Handmaid’s Tale” aren’t necessarily indicative of where Hulu is headed… sure, earlier I mentioned in the comments section that Gilead falls in the book. But is that what the show will do? Perhaps the Hulu-Gilead will develop new deadly bio-weapons and go on to achieve world domination… I used to put a lot of stock in the fact Margaret Atwood was a consultant on this series, but she’s allowed the show such free reign to make sweeping changes already that it’s obvious now nothing about the original text is sacred anymore.

Your remark about June falling into a cycle of escape, recapture and then reassignment to Fred was a good point… I never imagined, when reading the book, that June would ever see Fred and Serena again after being loaded into the black van at the end… I imagined that if the resistance were behind the wheel, then she’d be smuggled out of the country, where she’d record her story and then lead a secluded life (perhaps dealing with her neuroses and trauma in a psychiatric institution)… and if captured by the government, she’d be made to go through with the birth in prison, under armed guard. By the time she had done this, Fred and Serena’s corruption would’ve been exposed and they’d be executed, so the baby would be given to some other worthy couple. Then June would be imprisoned and tortured some more to see if she could be rehabilitated and reassigned to another couple. If her conditioning didn’t stick then she’d be shipped off to the colonies… such were the two mutually exclusive fates I imagined for June when I first read the book. I don’t know if you think either is a logical progression from the events seen in Season 1.

Do you think maybe the writers just felt compelled to keep Fred and Serenade around because they got attached to actors Joseph Fiennes & Yvonne Strahovski? Or felt the audience had got attached to them and thus they’d lose viewers if they took the logical step of writing them out?

With regards to what you said about the car and odd relics littering the house. Perhaps this Commander, like Fred, has a sinful nostalgia for the materialism of the old days. Maybe Fred knows and uses this information to blackmail him into going along with the plan to host a reunion there. Whatever, it’s been established that some Commanders don’t think the same restrictions apply to them as everyone else. This house isn’t such a blatant flouting of the rules as the Jezebels Club, so it’s more likely to have gone under the radar of the top brass.