After her grand act of defiance inspiring a non-violent protest, it is time to see how Aunt Lydia plans to punish the girls and whether June’s pregnancy means anything in regards to that.

Before martial law and the events of the past covered in the first season, we witness the world as it slowly began to change. When sending your child to school with a 101 fever was damn near seen as a crime for not only you not keeping the child home but endangering others. I’m talking, schools being fined for not saying anything and having the child be forced to not return for at least 48 hours.

But, Hannah’s fever becomes the least of June’s problems. For as Luke points out, and the news make glaringly clear – the most devastating terrorist attack since 9/11 has just happened. 20 – 30 people shot from the galleries in Congress and then there is an explosion at the White House. Thus bringing about martial law. 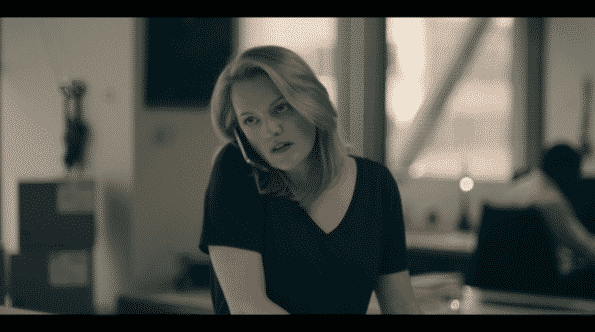 In interviews and on the show, it is made clear Gilead didn’t just come out of nowhere. However, as with this episode, the big focus is on their major moves for dominance. We don’t necessarily build upon what we saw in episode 6, in which the focus was Serena Joy’s part of building the Gilead movement, before being shut out.

Something which, increasingly, becomes of interest for what Handmaid’s Tale does so wonderfully is somehow keep this morose, almost dry tone, paired with powerful performances, and doesn’t get boring. And I should add, while, of course, Aunt Lydia’s actions bring about what perhaps writers think will act as an alarm for its audience, they don’t feel as desperate as other shows. Ones like, those on HBO, which often times seem heavily reliant on sex and violence.

But, getting back to the point, I hope this season focuses more on the rise of Gilead vs. the final days of the old order. Though witnessing the civil war wouldn’t necessarily be horrible.

A Revolutionary With A Safety Net: Aunt Lydia, June

The day of reckoning has come and Aunt Lydia decides to gather all the girls who didn’t stone Janine, who is now off to the colonies, and teach them a lesson. Their first being how, despite how viable they are, it doesn’t mean they cannot be killed. Hence why she scares them into thinking they will all be hanged. But, from there, it is Aunt Lydia’s usual methods of torture. A cattle prod, endurance punishment, and then she goes to the zone which helps us learn how girls in the first season got their scars.

In the case of this punishment, it is how a girl named Ofrobert will now have a burn on her hand. Which, due to her pregnancy, June avoids. Partly to the dismay of Aunt Lydia, but only because June ruins the joy Aunt Lydia had about one of her girls becoming pregnant. But, just so that June isn’t under the impression she can now be self-righteous, June is introduced to Ofwyatt. A young woman given her own private room, but what is essentially a large cell. One in which she is chained, and likely watched, at all times, but she does have a bed and a treadmill.

Said room is for those who craft the need to fear what the mother may do to harm the child. Which, with June’s attitude, Aunt Lydia feels the need to present. But, with Aunt Lydia also knowing June is a rather smart girl, she knows a bit of a warning is all she needs to fall in line. 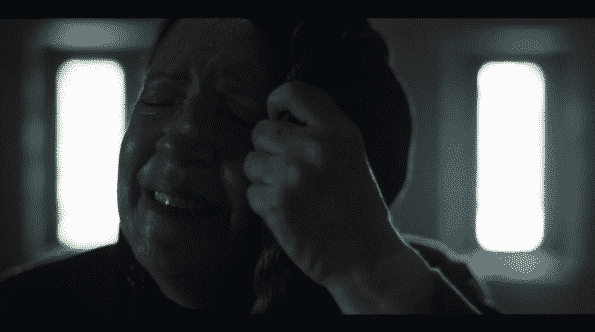 The power and pride of the aunts is such a curious thing. They train the girls, sometimes have favorites, praise them for getting pregnant and punish for disobedience. Yet, we never really learn much about them. All we know is, for the most part, the aunts are women likely in their 40s or 50s, past prime childbearing years. But, as for who they were, how they were chosen, what kind of training they went through, said things are unknown.

Though, considering the notoriety Ann Dowd received for the role, including an Emmy win and Golden Globe nomination, the writers would be fools to not expand on the character. Even if it would take away a bit of Aunt Lydia’s mystique.

But, with that said, perhaps the main reason there is a desire to know more about the aunts, much less Aunt Lydia, is because the concept of women in power in Gilead is a strange one. To a certain degree, you would think that if a woman isn’t able to bear children, or is assisting in the raising of one, she’d be in the colonies. Especially after she no longer menstruates. So the creation of the aunts, their place in society, and why their roles aren’t men is quite strange.

That and why these women, who surely lived, benefitted, and have known better times, why they would become the oppressors to their fellow women? It is something quite interesting and hopefully will be developed. Because, as June kept her mouth shut as the girls were being tortured, didn’t even seem to be uncomfortable that much, so comes the idea that comradery and all that? A sense of womanhood, as a community, that has become a part of history and no longer is of the present. Outside of the rare moments like Janine not being stoned.

With June pregnant, and Fred seemingly pulling some strings, it appears that after an examination to confirm the pregnancy, by a medical professional, she’ll be returning “home.” However, Nick arranges for her to be transported out of the city. As for whether he’ll move her out of country, alongside join her, that is harder to say. But, for now, it seems June is free. 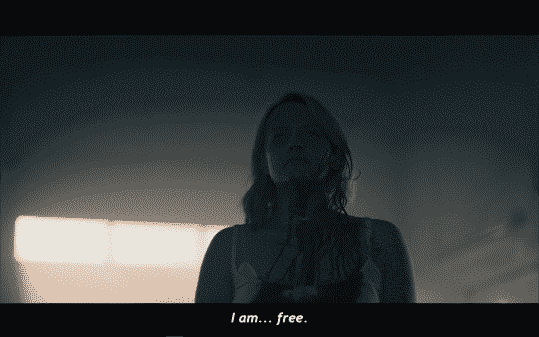 June is about her survival. Not just physically surviving either, but mentally and emotionally. So, as seen in the first season, she’ll make allies of who she needs to, perhaps even sleep with who she has to, in order to maintain just enough of herself to remain sane. But, the true test of who Jane is, or has become, will be when she is back in a state where this isn’t necessary anymore. Has she forever been changed or can she return to what once was normalcy?

Plus, considering she saw her daughter, yet is being given this opportunity to leave, will she leave and then try to sneak back to get Hannah or refuse to leave without Hannah entow? Leaving without her and never looking back does not seem like an option, based on the fit she had when she saw her, so which way will she go and how will she do it is what we have to look forward to.

There is more than one kind of freedom. There is freedom to and freedom from.

If you want to know more about the rationale behind The Aunts caste and the origins of Gilead, then it’d be a good idea to borrow the novel from your local library and skip ahead to the appendix at the end of the book called “Historical Notes” – which takes the form of a history professor in the future delivering a lecture on the social structure and origins of the now extinct society of Gilead. He also expounds upon how June’s story came to be a matter of public record (basically, a bunch of old cassette tape recordings were found in the ruins of an old building and then reassembled by a bunch of academics who were unsure of the correct order they should be edited into – which accounts for the fragmented and non-linear style of the narrative). Of course, the TV series might change aspects of this, but I predict that the fundamental underpinnings will be the same, since most of what the TV series has changed from the novel relates more to tone and characterisation, rather than politics.