Buddy likes to go swimming in the mornings, naked.

Ozark continues to get better as Ruth’s family plays a bigger role, a potential love interest seems possible for Marty, and the FBI land in Ozark.

Getting The Most out of Ozark: Marty, Wendy, Trevor, Roy

Trevor (McKinley Belcher III) makes his presence known and reveals Bruce worked out a deal with the FBI. Something he tries to convince Marty and Wendy to take, but they stick pretty close to their story of innocence. Which is fine with Roy (Jason Butler Harner) for all he wants to do is land a career defining arrest. Which, considering how loose lipped Marty’s family is, shouldn’t be hard.

But while Marty has the FBI following him, it seems Del’s people and the Langmore kids are messing with Wendy. Something she fights back on, in terms of the Langmores. But what she really focuses on seems to be finding a job. Of which, she hones in on working with Sam (Kevin L. Johnson) and getting the houses he sells looking presentable for buyers. Something Sam’s mom usually does but Wendy blows her talents out of the water.

Speaking of blows, while Rachel Garrison’s place is doing better and helping Marty was some money, it isn’t enough. Leaving him racking his brain for another business to use. Of which, the only thing he discovers is possibly using a church.

Writing this topic, I come back to realizing how little of an investment I have in Marty and Wendy’s problems. Especially when detached from Ruth. Though, I should note, I find Marty and Rachel’s interactions curious. If only because I can fully imagine those two getting together. For while Marty is married, I don’t think there is any chance of reconciliation there. So, despite him obsessing over the next business to use to the point of insomnia, I think Rachel may have the chance to wiggle into his heart.

Speaking of love affairs, Trevor and Roy being exes seemed to come out of nowhere. Though, it could also be that we just don’t get many men like them who are gay. So while Trevor, in the last episode, seemed offended by Roy wanting to do this Ozark thing alone, who’d guess because they weren’t your typical partners? That is, beyond partners on the force but formerly partners in life. Which, all things considered, I don’t see why Trevor was attracted to Roy. Unless he got a color complex or likes daddy types.

Potential romances aside, as much as I’m borderline indifferent about Wendy, I really just want to see Linney thrive. For it is just kind of weird seeing her play second fiddle. Especially since I grew accustomed to her as lead. So I’m hoping with time she breaks away from being an accessory to Marty’s story and even if it is just petty back and forth with the Langmores and helping Sam, she has her own thing.

When The Student Becomes A Master, She Kills The Teacher: Ruth With uncles like Boyd (Christopher James Baker) and Russ (Marc Menchaca), someone has to be the smart one of the family. To some surprise, that technically is Wyatt. But he has better plans than being trapped in Ozark all his life. Plans Ruth seem to have faith in. However, with her being trapped there she is going to make the best of it.

Starting by demanding more out of Marty for keeping his secrets. For while he mouths off about his money openly, it still isn’t known to every last soul of Ozark’s underbelly yet. Meaning, there is still a score to get. However, what makes Ruth smart is she is thinking long term. Two uncles who buy girl Bobcats, after she told them not to touch the money will always drain her funds. She needs a real long term gig.

So, the plan is to learn how to money launder from Marty. Surely he needs help, right? Hell, it isn’t like she couldn’t be a cultural translator and help with the locals. But, once the student becomes the master, she plans to kill Marty and take his money. Though, for this plan to work, she has to do more than guilt him into giving her a job washing dishes. 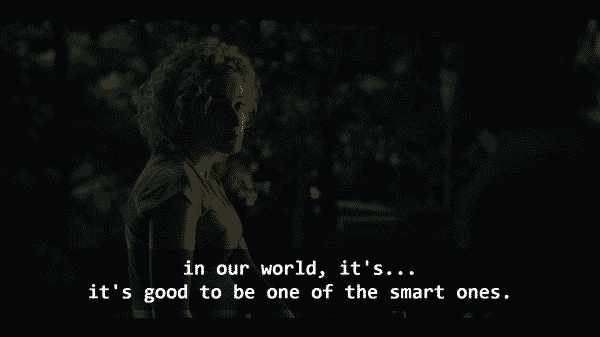 Ruth is talking to Wyatt in this scene.

I’m really starting to believe Netflix’s general plan for their shows is to Trojan Horse new talent. What I mean by that is, like seen in Glow, Orange is the New Black, and I’d even argue they did this with Girlboss through using RuPaul, developing talent who can be reoccurring on their network. Sort of like how, on FreeForm, for example, some actors seemingly leave one show on the network to get prominence on another one. Sort of creating, what I guess could be called, synergy.

For Ozark, I see Julie Garner [note] Who also was in The Get Down so Netflix seemingly is already on this synergy thing. [/note], who I’m basically stanning for at this point, as that person sort of being molded to helm, and perhaps star, in a future Netflix production. Since, I’d argue, she is the only reason to watch this show at this point. I’m sure there are a lot of Jason Bateman and Laura Linney fans, but their names are just the lore to me. Garner is who will truly be remembered when all is said and done.

I won’t say to the point where this will be considered a breakout role, but definitely one of note. A show part of the foundation needed to turn her from a familiar face, likely famous for her curls, to a real headliner. Which I’m just hoping won’t be through a Madonna biopic. Though that seems like it could be Garner’s destiny.

” Sort of creating, what I guess could be called, synergy.”

Or recreating the studio system of the early days of film. And you are spot on about Garner; she has a bright future I hope. I do know she is a serious talent.