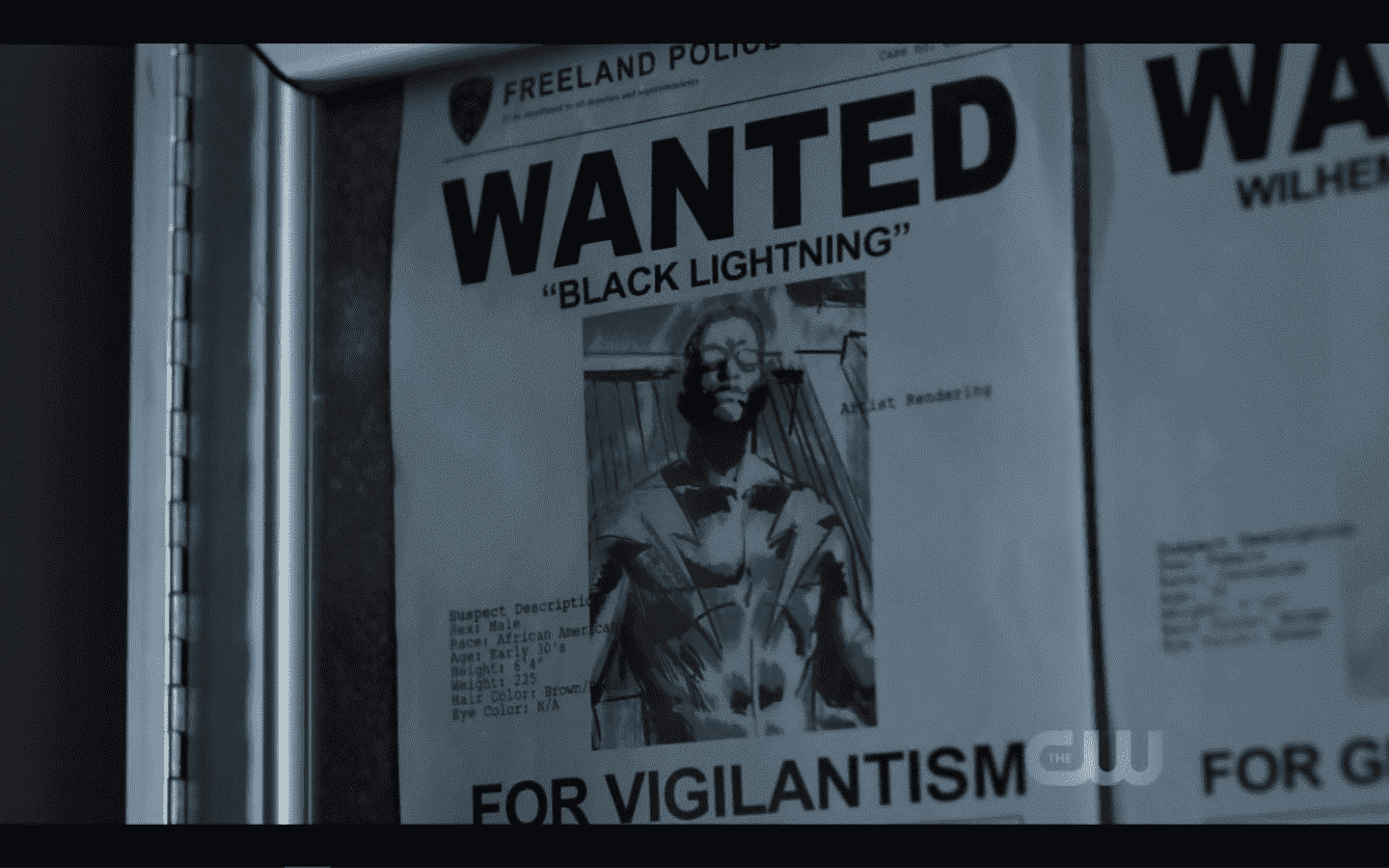 What Black Panther did with empowering the undeserved on the big screen, while appealing to the masses, Black Lightning does on television episode to episode.

It had been 9 years since Jefferson Pierce, Garfield high school principal, was the legendary hero Black Lightning. However, with it affecting his marriage and his battle with his father’s killer over, he retired. Thus leading to a criminal element returning to Freeland and him making deals with criminals, to protect his school and students, than fighting them.

However, as his youngest daughter, Jennifer, finds herself drawn into trouble, thanks to this young man named Will, Black Lightning ends up having to come out of retirement. Something which many are happy about but also question. Mostly in the form of, why now? Which, the one character who seemingly pieces it together, they get killed off quick.

But, overall, the fight for justice and the safety of the children in the town is the main focus. Especially as the leader of the 100, disgraced politician Tobias Whale, begins pushing drugs onto kids. Not knowing that he is just a pawn within his boss’ Lady Eve, and her associate, Proctor’s, goals in finding more people who could become like Black Lightning and perhaps create an army.

You know how we’re having a bit of a 2.0 craze? How this is A Different World 2.0, Cosby Show 2.0, and etc? Well, in some ways, Black Lightning brings about an almost Cosby Show vibe but with fewer children and sci-fi/ action elements. It begins just by the noting of Black authors, philosophers, and Jefferson seriously pushing Black American history when it comes to his kids and students. Us seeing, similar to The Chi, so many different hues of Black and while it may not get bonus points for different body shapes, in the beginning, there is some LGBT representation with Jefferson’s daughter Anissa.

Something that may have gotten dropped, but seeing a Black lesbian superhero, live action, who also is brown skinned? It was so nice and refreshing. Then, on top of that, the same character is such a social justice warrior, for Black rights, that her sister nicknames her Harriet? Can you ask for more?

Well, actually, you can. Because unlike many shows, nearly every single Black character on here is either seeing someone Black or did. Jefferson and wife Lynn, a neuroscientist, will be perhaps one of your favorite couples on TV. Yes, they have some marital issues, but it stems from her worrying about one day finding Jefferson dead in an alley, on the news, or bleeding out while she is trying to save him. Not to forget, someone figuring out his real identity and that putting the family in danger.

But it isn’t just the parents, but also Anissa and Jennifer who dabble in Black loving relationships. Anissa’s longtime girlfriend, Chenoa, is a Black woman and despite us not seeing them much, a Black lesbian couple on network TV doesn’t come around every day. Then with Jennifer, she had a really sweet relationship with Khalil till that went to hell.

Thus giving you a bit of diversity without diversity meaning your usual person of color and white pairing.

Bringing back that Cosby Show comparison, there is something strangely ideal yet still real about the Pierce household. They have family dinners, the kids live with their folks, but it isn’t like the kids are saints. Jennifer, as noted, is starting to smell herself and talk back a bit. Anissa, who is productively stubborn, also isn’t much for hearing no.

Yet, despite the issues they sometimes have, and how they deal with secrets once revealed, they remain a strong unit. One which figures out how to present something to put on a pedestal without making it feel unattainable.

How many Black villains do you know off hand? Not anti-heroes, or those like Amanda Waller who have the attitude of a villain but technically are an anti-hero? For those not heavily into sci-fi and comic book lore, there aren’t many to quickly name. Especially those who look like Jill Scott and present the best of both worlds. That sweet southern nature, which has you see why they are an honorable member of society, paired with someone who would unload as many clips into you as needed. Be it to get a point across or to simply kill you.

And speaking specifically about Scott, you will so badly wish that, like Tobias, she was a villain throughout the series vs. just an arc. For those who saw Love Beats Rhymes, the darkness and venom we saw in her role within that movie, it is on full display here. To the point that you’ll be clamoring for this show to do like Gotham and bring back its villains with various means of explaining how or why it was done. For she is truly that good.

Addressing The Past To Understand The Present

Those who don’t venture to read the source material often times are led to feel they are missing out or can’t jump in because they are out of the loop. With Black Lightning, thankfully it isn’t part of the Arrow-verse, yet or officially, so there isn’t any need to watch that show to understand what is going on. Also, unlike some shows which make you believe you have to check out a Wikipedia article or something else to get a firm understanding of a character, that isn’t necessarily the case here.

I will admit to feeling compelled to look up Lady Eve, since there seemed to be something missing there, but for the most part, you get everything you need to know in terms of how Jefferson became Black Lightning, Tobias’ past, and more.

No One Can Figure Out Jefferson is Black Lightning?

Jefferson has the body of a WWE wrestler and is very distinctive. So the fact that a mask made for a barely discreet masquerade party is hiding his identity is comical. So comical that when two characters seem, or do figure it out, it makes you wonder why only these two can see what everyone else can’t?

When the season begins, and we are introduced to Lala, there is this vibe that we are going to watch a mash-up between a hood drama and your usual superhero vehicle. However, as Lala’s arc ends, the show effectively kills the urban drama vibe and doesn’t necessarily lighten things up but brings the tone of the show more in line with Black Lightning’s peers. Which makes things seem less serious, life or death even, and signals the beginning of a slow death in quality for the villains.

How Its Villains Are Handled

The way this show handles its villains is with each one passing the baton to the next. Lala passes it to Tobias, he to Lady Eve, back to Tobias, then to Proctor, and it is right back to Tobias again. Unfortunately, as said baton is passed, we don’t necessarily get a bigger and stronger bad guy. Don’t get me wrong, upon introduction, each villain seems formidable and intriguing. The issue is, they don’t stay that way. Well, with the exception of Lala who may be the only one that can be considered consistent.

As for everyone else? Tobias becomes very hit and miss. In fact, for those who watch or are aware of FOX’s Gotham, consider Tobias this show’s Penguin. He started off low, jumped up in status too quick, and now is sort of the gatekeeper for the show. To become a notable villain on this show, you have to interact with Tobias and there is the wonder, if not fear, his ups and downs in the underworld are going to strongly coincide with what we’ve seen Penguin go through.

Leading to Lady Eve and Proctor. To put it simply, despite how bad ass they are touted to be and appear, that façade is taken care of quicker than you may like. Making them seem all talk, despite the inkling of action and them throwing their weight around. And this even includes when some, like Proctor, even at this lowest point, have something to combat Black Lightning with.

Taking note becoming a hero is assumingly time-consuming, it seemed odd that Anissa being queer and showing interest in women got drastically reduced to not being a part of her storyline by mid-season. Especially since her second love interest, Grace, was a comic book nerd and was part of what inspired Anissa to become Thunder. Yet, after Grace gets attacked and consoled, we don’t see or hear from her again.

While there are many blueprints for how to handle a superhero show, there isn’t one which is made to cater to a Black audience while maintaining its ability to not simply become a “Black show.” That is, for Black people and only attractive to Black people. Yet, Black Lightning makes it work by not looking towards its comic book adaption peers, but more so towards The Cosby Show as to what to emulate until it finds its own groove.

Leading to why the positive label. Black Lightning finds a way to appease and excite those who want a sci-fi action hero, as well as those who want to see a Black family go through highs and lows. It’s a people pleaser without being pandering and while its villains sadly falter in quality, their entrances are good enough to make up for their unfortunate exits tolerable. Thus giving us a show which will hopefully open the doors for other people of color heroes in the future. Especially now that a blueprint for them has been made.