In a Relationship – Recap/ Review (with Spoilers) 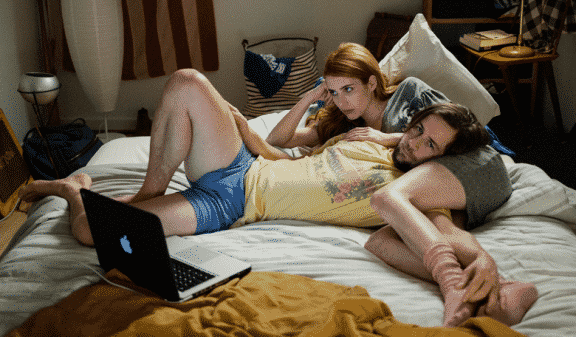 In a Relationship tones down the dramatics of young love and while the lack of dramatics does make the film eventually feel dull, it also makes it one the most honest depiction you’ve seen in a while.

After about 5 years of dating, Hallie and Owen’s relationship has hit an odd phase. Marriage isn’t something that is really talked about but it not being talked about seems odd. Hallie is pretty much over Owen’s apartment all the time but he doesn’t want to move in together so… what are they doing? That is, besides being committed friends with benefits who call their friend affectionate, borderline meaningless, titles?

But the film isn’t just about Owen and Hallie trying to figure out if their relationship has run its course or not. Hallie’s best friend Willa ends up in a relationship with Owen’s childhood friend Matt, and the ups and downs of their relationship are also focused on. Though, while Owen and Hallie exhibit the issues which come from being together as long as they have, Matt and Willa deal with not just the newness of their relationship, but also their personalities clashing. For with Matt being a nice guy, of an actually interesting variety, paired with Willa who isn’t necessarily a bad girl but one who definitely doesn’t adhere to respectability politics, a lot of issues come about.

Leaving you to wonder, will we ultimately get a happy ending, realistic one, or a mix of both when it comes to these two sets of couples?

Usually, in films like this, things are a bit lopsided. You have the lead cast members, who have familiar faces, paired with the up and comers, who usually have less drama and focus. However, Hallie, Owen, Matt, and Willa are pretty much on an equal playing field.

Which is done in a quite interesting way I should add. There are quite a bit of compare and contrasts at play in Boyd’s script which compares not just the relationships, but each character’s approach to relationships, what formed how they approach love, and how they destroy or maintain it. Hallie and Matt are the types who seem like what they are looking for is long-term love with deep commitments. Then, on the other side, we have Owen and Willa who seem to very much enjoy the fun, honeymoon phase, but once things get too serious, they are ready to start sabotaging things.

But, as much as the film may seem to be working on a male and female version balance sheet, there are differences. Hallie is at a point in her life where her career is taking off and with that, like perhaps a lot of millennials, there is this question of why is one aspect of her life progressing while the other is stagnant? Which is bothersome. In comparison, at this point of Matt’s life, the validation he seeks in a relationship is just the idea of being worthy of being the only one someone sees. Not in being worth marrying or being the father of someone’s kid, as where Hallie’s head seems to be venturing to, but just being worthy enough where he doesn’t need to feel insecure about the state of his relationship all the time.

Then, when it comes to Owen and Willa, the main difference we see is how they handle when the honeymoon period is over. For Willa, normalcy for her was unavailability and inconsistency. So with Matt giving and expecting this, she sabotages the relationship by venturing to what she was used to versus what she comes to realize she wants.

As for Owen? The issue at hand is being stagnant and complacent. Everyone else in the film wants progress and change. They may not know how to achieve that with another person and be happy, but they want to fight and venture for it. Owen, on the other hand, there isn’t much fight in him. His take it that he’d rather leave on a high than face the unknown and the challenges beyond the honeymoon phase. Really pushing Hallie to wonder if there are guys like Matt out there for Willa, maybe there is someone out there for her too.

It Is Without A Lot Of The Usual Romance Movie Tropes

Taking note of the drama mentioned above, what you have to appreciate about this movie is that no one gets painted as a bad person, the long-suffering, or anything like that. Also, there aren’t grand gestures to get back with someone either. Everything is rooted in reality so while secrets are found out, people try to reconcile, tears are shed and hookups happen, they don’t lead to huge dramatic blow-ups. Oh, people get pissed and drunk dial or text, but nothing ridiculous goes down. Thus making this feel fresh by not receiving all the additivities which would have, perhaps, made this more entertaining but not as real.

While the film has the occasional funny moment, for the most part, it is very slice of life. We see people have sex, argue, do boring things with one another, talk about their past, their future, their careers, drink and do drugs, and all without much in the way of flair. Something which deserves praise for it leads to nothing feeling sensationalized but in the process of doing that the film does sometimes feel euthanized.

The Characters Are Barebones

In one way, you can look at these characters and what they go through as universal. Something either you can identify with yourself or imagine someone who is like any of the people in the movie. Yet, again there is a double-edged sword in play. With how bare these characters are, yes it could make them easier to be anyone; Yet, with them being generic comes this sense of shallowness.

One thing not really dove into is who are these characters outside of their relationship pursuits? Hallie we see the most of, in terms of her pursuit of being a notable photographer but what got her into photography and is she just into portraits or maybe fashion photography as well? We know Willa traveled across the country for school, but what was it for again? Oh yeah, she mentions it maybe once or twice and the rest of her screen time is fully dedicated to either Matt or the relationship she knows will never happen. Then, in terms of what Owen and Matt want to do with their lives? Is Owen seriously okay with living off of editing footage from kids’ parties? Also, what is Matt trying to do with his life besides work at a silent film movie theater?

Questions like these go unanswered and make it so, while you love who the characters are in their relationships, whether you would love who they are as individuals is harder to say.

On one hand, tropes are kept to a minimum and the movie tries to be rooted in reality vs. heavy on sensationalism. But, with that done, now comes the issue of how to compensate? The film doesn’t do this by making this a dramedy nor does it have the most interesting of characters, when you aren’t thinking about the complications in their relationship.

And that’s why this is being labeled mixed. There comes a certain point in the movie where it is nice it is relatable and isn’t over the top but by being low-key it also makes you complacent and antsy a bit. Making it where you just want to know if this couple will stay together or not for like watching a long-running series which is about to end, you just want to see if your investment paid off or not. Which, honestly, I can’t fully say it does.