Season 1 of Carnival Row is ambitious and builds a wonderful world filled with lore, but the majority of its characters fail to really make that world come to life. While Dahlia, and her organization, The Black Raven, are a flash in the pan, Pirrie brings a strong, notable, and dearly missed presence by the end of the show. Especially in terms of presenting anti-human, aka legger, sentiment. Not to forget, giving someone for Vignette to talk to, or play off of, who isn’t a love interest.

The Show’s Handling Of Romance – 85

Romance in Carnival Row often operates on a slow burn. Whether talking about Vignette and Philo reconciling, after being rather hot and bothered in the past, or Imogen and Agreus working through their differences across the season, we had two strong relationships to follow. The kind which could make you swoon a bit. Especially Imogen and Agreus for while there was the issue of them being different species, Imogen racist, and Agreus a bit elitist in his own way, as they fought to who the other was at heart, a love bloomed.

Then with Vignette and Philo, there is just chemistry there. Which leads to Delevingne’s main contribution to the show. For while Vignette is shown to be capable of kicking ass, she doesn’t necessarily have a single story that sticks. Making it so she is relegated to playing Bloom’s love interest and creating this chemistry between her character and his which makes you giddy for their inevitable reconciliation. Strangely, while Sophie isn’t introduced until halfway through the season, she becomes one of the most important, and intriguing, characters of them all. We’d even submit she is really only second to Philo, solely due to him having far more screen time. For unlike most characters on Carnival Row, Sophie isn’t reacting to external stimuli but creating situations and problems for others. Also, she has a personality which seems to be all her own and for the enjoyment of herself – rather than made on the dichotomy most operate on to either be liked or hated. Making her a welcome addition which does present the idea season 2 could be far superior to season 1. Primarily since it would call for her presence to be increased.

Despite not being a book adaptation, the world of Carnival Row is made to seem massive. It speaks about two continents, and its cities, heavily. The Burgue, where most of the show takes place, has varying districts, secret areas, and a distinct vibe to each one. And while we do only get to see faun, pixies, and humans interact, no centaurs get notable roles, or other fae creatures, it gives you something to get excited to see in the future.

While The Pact is noted to be quite fearsome, due to the show only spending an episode in the past, and barely touching on what is going on in Tirnanoc, they become an afterthought. A group who are noted to be fearsome but you barely have much of a grasp on. At least beyond their use of werewolves and that they were the enemies to Anoun and its people.

But it isn’t only that group that is built up a bit but falls flat. The Black Ravens, led by Dahlia, seemed like they would be the driving force behind Vignette having her own storyline. However, it seems any interest made into fleshing out Dahlia or this group was divested for some reason. Be it because someone thought Vignette’s storyline would become too distant from Philo’s or that diving deep into the underground market of the Burgue would have been too much to cover in 8 episodes.

Either way, both present missed opportunities to build notable villainous groups that could have compensated for the lack of a central villain who felt noteworthy. For as much as the Darkasher, and the one who controls them, can be seen as villains, they utterly lack pop.

Vignette Is Barely Above A Love Interest – 64 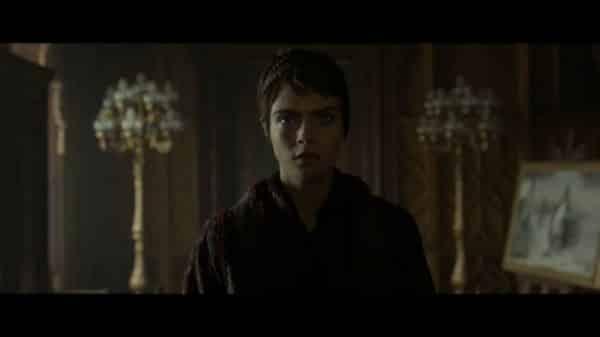 Sometimes I was left wondering why Delevingne decided to take up this role. As said, Vignette is shown to be a capable badass, but all roads lead back to Philo and her being his love interest. She ends up Imogen’s lady maid, but then gets in trouble and Philo pays for her freedom. Vignette joins the Black Ravens, and no sooner does she get accepted there is drama that Philo bails her out of, and then she never interacts with a member of that group again.

Now, don’t get us wrong, Vignette and Philo are cute. It’s just, it seems like Vignette has reins put on her and whenever she got too autonomous and could have had a life outside Philo, she got pulled back, and whatever storyline she had was made mute. All so she could drift back towards Philo.

Likely this storyline was made to set up something in season 2, but the problem is that it focuses on two barely notable faun to drive the story. Making it so, even when one does something major towards the end of the season, it doesn’t seem organic. If anything, the act, which have significant consequences, seems not to be done even for the sake of shock value, but just to push the story along. To quickly prep for writing off a character to make room for someone else. Just not the assassin or their organization.

While The Worldbuilding Is Excellent, Character Building? Not So Much – 70

Despite how detailed and layered the world is on the show, the characters? Well, not so much. One would submit most of the main characters, Philo and Vignette for example, we’re more so given information about than reasons to necessarily invest in them. Then when it comes to lesser roles, you may get a job and a fun fact, but that’s it. You don’t get a strong personality, charm, and even for those who drive the story forward, the writing and acting doesn’t make it seem only that person could have done something. They are necessary and essential. Making it where your investment is far more geared towards the changing world than any of the people who are changing it.

The Drama Just Doesn’t Hit As It Should – 71

To add onto that, when it comes to the actions of the people, rarely do the moments pack a punch. Even when there are assassinations or reveals, sometimes it feels less like a story developing or unfurling and more like data on a spreadsheet. Like you are playing a 16 bit choose your own adventure in which someone else made the choices, and you are reading what they decided. For that is how flat most of the moments, taking the show in as a whole, feel.

Similar To The Boys, The Season Feels Incomplete – 72

With The Black Ravens set aside, it being unclear what is going on with this Hidden God, and this vibe we’re more so at a mid-season finale than the season finale, season 1 feels incomplete. Like The Boys, you are left with this vibe that season one was more geared towards building a foundation for later seasons than one which could stand on its own. Creating a “Part 1” vibe, and us waiting for part 2 within a few months to feel like we got a complete story or chapter to the Carnival Row saga.

You have to admire Carnival Row’s ambitions for its first season. The money put into the look and lore of the show is notable and worth praise. However, the characters who are supposed to make the history and places we see vibrant, they aren’t necessarily given license to do that. Everyone seems set to play a specific role and like a renaissance fair, anyone who steps out of character, or conflicts with the royals, is either cut or subtly made to seem irrelevant. Almost like a hiccup or an idea which, while crafting the outline of how things should go, seemed like a good idea. But then when it is seen live, it is figured that it is better to abandon as soon as possible than struggle until things get better.

Hence the mixed label. While season 1 of Carnival Row lays a wonderful foundation, it doesn’t necessarily utilize its large cast to make you think this show is stable enough to go the distance. Certain characters who should be pushed more, or organizations, are set aside. They’re introduced to moderate hype, but when they start to eclipse the more well-known actors, or the deemed central story, they are treated as afterthoughts. So while Carnival Row is worth sticking around for another season, it is hard to say, if the show keeps its course, season 2 will be better.

Vignette Is Barely Above A Love Interest - 64%

While The Worldbuilding Is Excellent, Character Building? Not So Much - 70%

Similar To The Boys, The Season Feels Incomplete - 72%