Liza Koshy & Sabrina Carpenter star in a dance movie that has a few kinks but is it overall enjoyable?

Like many, Quinn has been indoctrinated into thinking what colleges want is academics, extracurricular activities, and volunteer hours. However, upon meeting Ms. Ramirez, Quinn is reminded you have to be passionate about more than getting into a certain school – you have to have a life. Which for Quinn was never really on her agenda. Getting into Duke has been a dream since her dad died, and now she has hit a major roadblock.

Luckily, one means of getting past it is working with her best friend Jas, and being choreographed by former dance champion Jake Taylor, to start a dance team. All of which to prove that she, Quinn, is more than yet another kid checking off boxes. She can blow up the box and surpass any and all expectations! Just as long as she gets out of her own head… 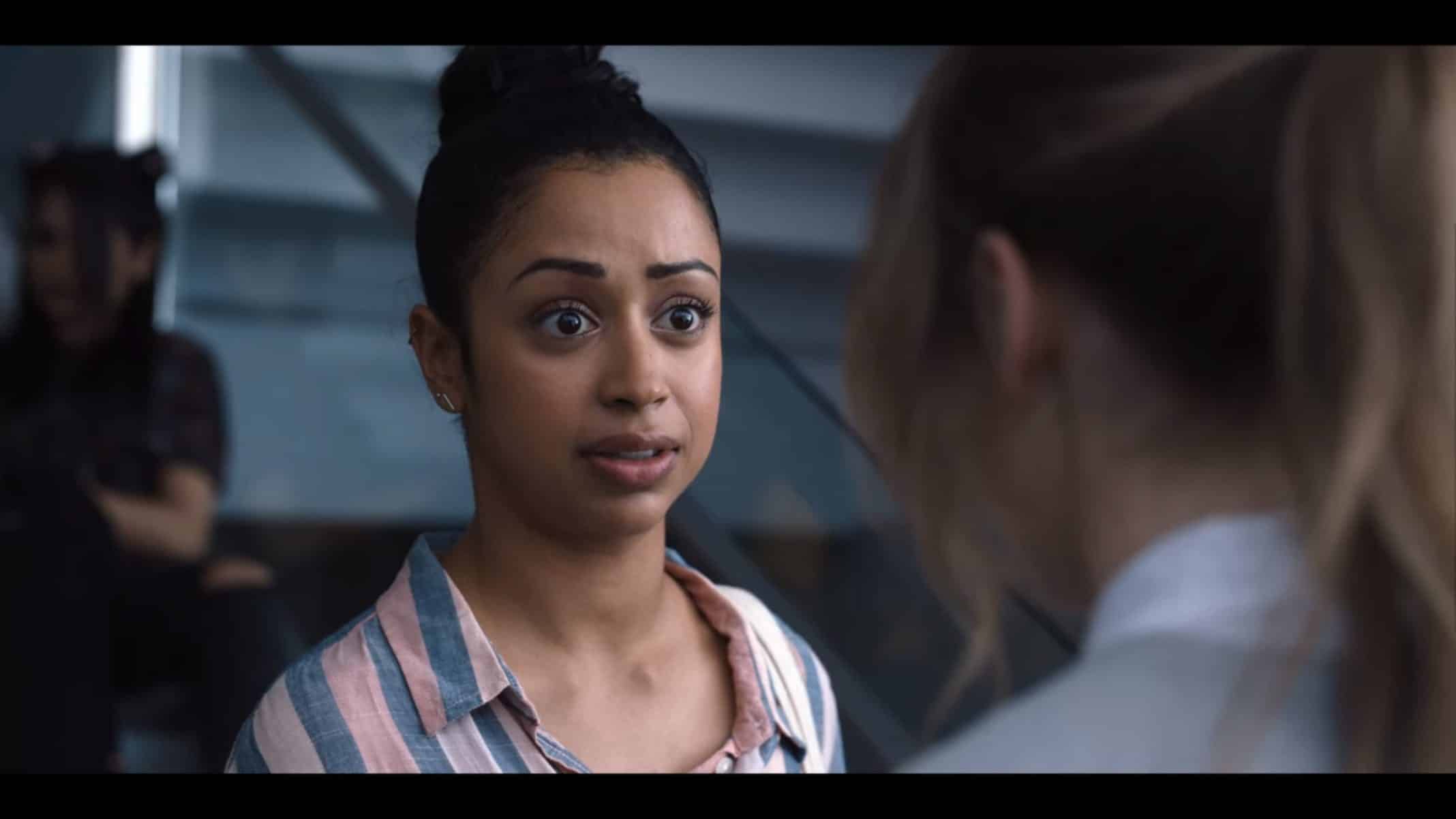 It is continually questioned when it comes to social media famous personalities, when they relinquish control and try to work in the system, can they succeed? Well, when it comes to Liza Koshy, the answer is a resounding yes. For as shown since her role in “Boo! A Madea Halloween,” Koshy isn’t stuck in her YouTube persona and awkward when she isn’t with her crew or alone.

For example, her dynamic with both Carpenter and Lonsdale, it shows her as an able and willing collaborator. One just as much able to be the butt of a joke as the one who is highlighted. And in that give and take, including during a lukewarm emotional part between her and Carpenter, you can see Carpenter likely becoming one of YouTube’s biggest success stories in the acting world. 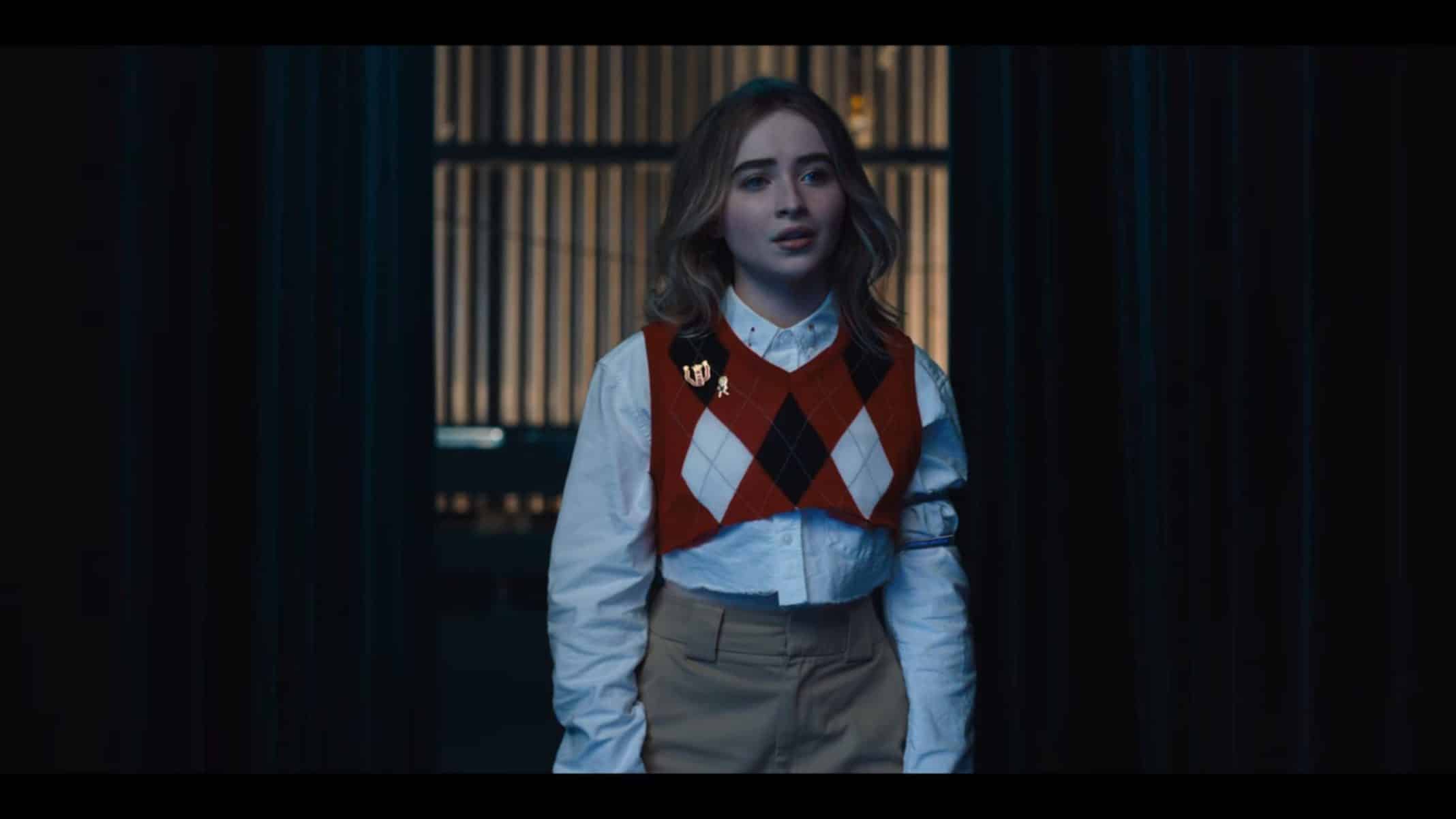 Between this film and “The Short History of The Long Road,” Carpenter has shown herself to be a diverse actress. One that, as also can be seen in “Girl Meets World,” can jump into different lanes, genres, and show herself as multifaceted. “Work It” is no different as you can see her legitimately struggle with the dance moves, and even try to keep count as she is learning, and trying to perform, routines.

But, as with Koshy, you can see someone who knows and loves to collaborate, for there isn’t this vibe she needs to be seen and recognized as the star. I’d even say when sharing a scene, especially in conversation, that is when Carpenter shines.

Though I would be remiss to not mention the dancing. Now, mind you, there isn’t anything so good or shocking you’ll stand up and clap or have to walk away because of a move. Which isn’t to say the moves and choreography are simple, but not revolutionary either. More so, they are what would require months of training, and it is more about the chemistry of the leads, and meager attempts to mix in the cultures of the dancers, that draws you in.

Specifically, when Carpenter and Taylor’s characters dance, those are the best bits, while the big group numbers feel secondary in focus and pizzazz.

Quinn’s dance team is called TBD, and for most of the people on the team, besides Jas, Jake, and Quinn, who they are is TBD. Don’t get me wrong, we get the most basic thing, like the Black kid is into hip-hop and releases mixtapes, the Hispanic kid loves soccer, and things which may raise an eyebrow for some, but that’s it. You get a name, one specific thing they are interested in, and that’s it.

Unlike another Netflix film, ” Candy Jar,” the pressure to get into college, never mind the right school, isn’t presented here. The idea is, but there is an utter lack of realism or depth. For example, someone qualifying for what sounds like a major competition after 2 months of dancing? Especially considering only one, maybe two, have trained for years? That’s not realistic.

And granted, realism is clearly not what the film is about, but if you are going to take liberties in how we reach the goal, at least give us the weight of what it would mean to fail. For with Quinn’s dream based on her dad dying and her mom working two jobs, and us not exploring whether she really wants to go to college or if she chose pre-med or that is what her mom wants? Her desire, her goals, they don’t have that oomph they should have. 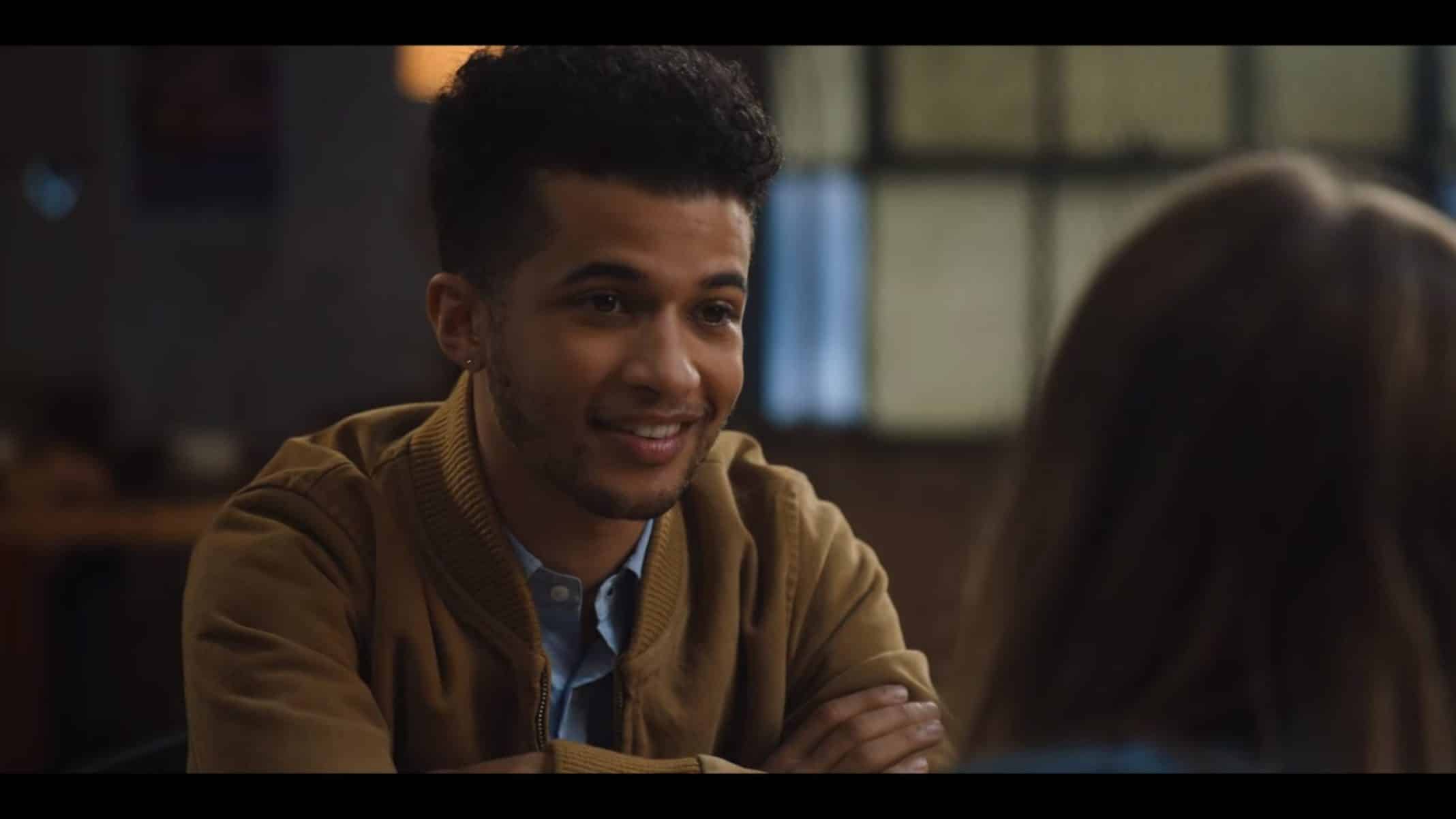 Heck, even with Jas and Juilliard, Jas’ rival, there is only a subtle reminder that they put so much effort into dance that, if they get injured, like Jake was, or aren’t chosen for a notable school, what that could mean. So while “Work It” grazes upon what could happen if things go wrong, the biggest drama is whether or not Quinn makes people feel used to achieve her goals.

I mean, even Jake’s character, who had a torn ALC, and is by no means back to where he was, only once do they address his injury. For the rest of the movie, despite the moves he does, it isn’t an issue.

While definitely enjoyable to watch, “Work It” isn’t something made to be viewed over and over again. It’s simple, entertaining, but by no means a great dance film nor speaks well of the pressures to get into college or live up to your parents’ expectations. Hence the mixed label. 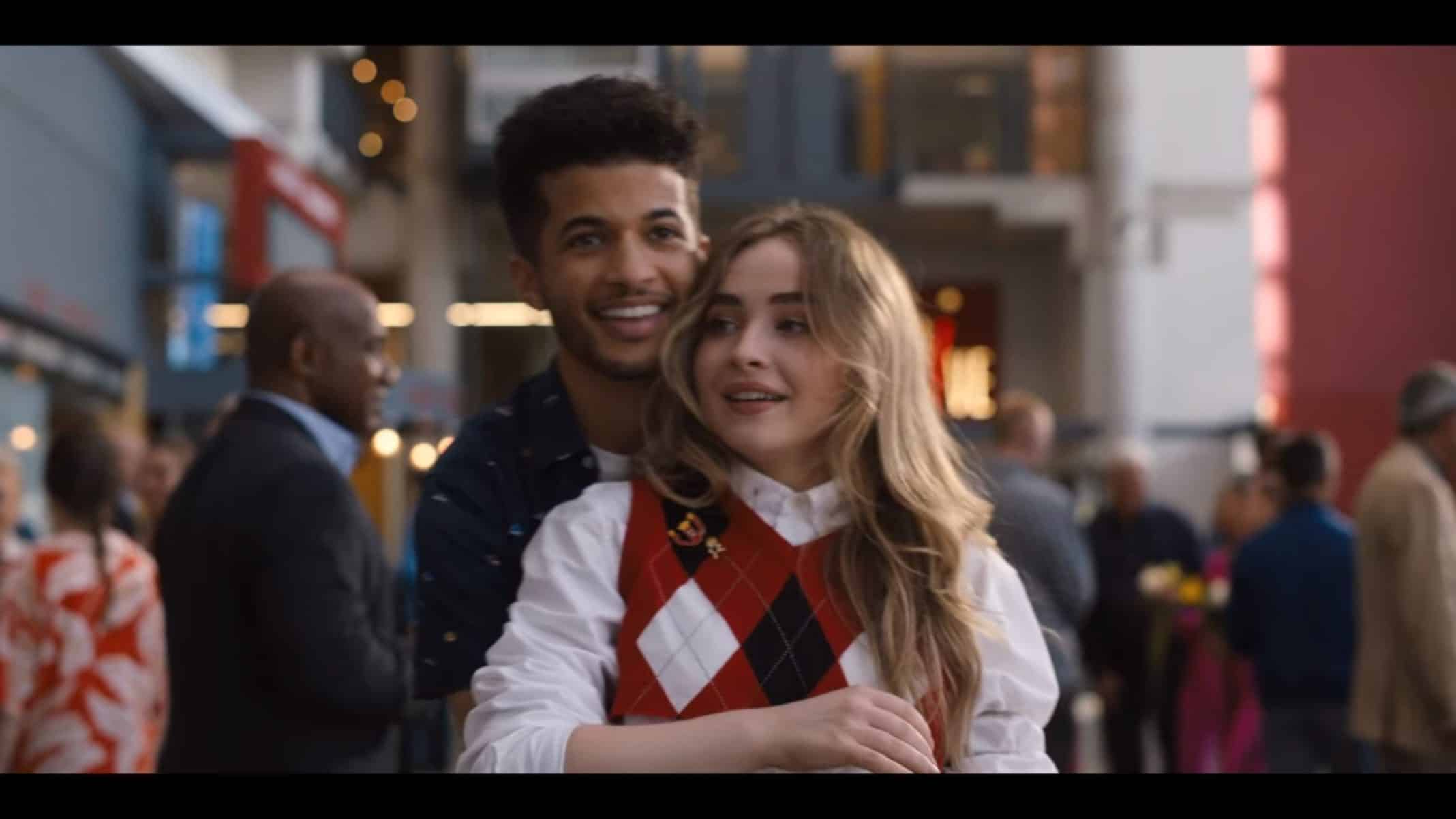 Despite Quinn only having months of training, and Jake having torn his ACL, and technically him being in the group disqualifying TBD, the dance team wins! They beat Isaiah, aka Juilliard’s, Thunderbirds by 0.3! On top of that, despite being fired from Duke, for reasons not revealed, Ms. Ramirez reveals she now works at NYU and gives Quinn her card. Also, both Jas and Isiah are offered the opportunity to go to New York Dance Academy!

And did we forget to mention Jake and Quinn are a thing now?

This means, if there is a sequel, nearly everyone will be in the same area! Well, at least the characters who were developed and pushed to matter. As for Jake, considering helping Quinn and her team got him fired, him moving to New York is an option.

"Work It" isn't something made to be viewed over and over again. It's simple, entertaining, but by no means a great dance film nor speaks well of the pressures to get into college or live up to your parents' expectations.