Thanks to the chemistry of its leads and message about the pressure kids are under to get into college, Candy Jar sidesteps being just another quantity over quality Netflix film.

Both Lona and Bennett, since they were about 6, have actively competed with each other seemingly like their parents Amy and Julia. So, with that in mind, there is an assumption of multi-generational hate. Something which becomes a problem upon their senior year for with hopes of Harvard and Yale, what they are looking for is a state championship. Something they can’t get as individuals so they are tasked to do so as a team.

That challenge, one perhaps too complicated for even their entrusted guidance counselor Kathy, maybe what makes or breaks these two and determines their future.

Commentary on the School Pipeline 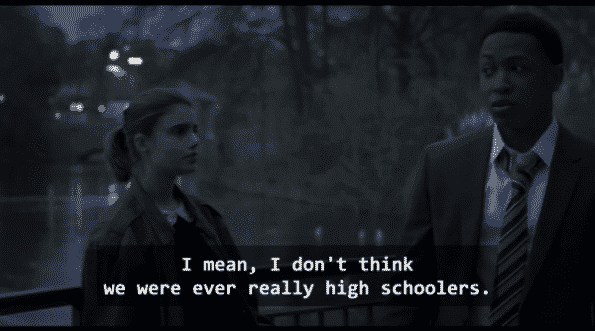 Getting into college has largely become an obligation, similar to getting a high school diploma. If you want to be successful, have a fulfilling job, and not struggle throughout life, you need a college degree. This is noted by Julia and is something the kids largely believe. Yet, it is also shown and noted that the sacrifices made to get into a college could mean sacrificing what it is to be a kid.

Yes, Both Lona and Bennett have straight As and with debate team, some form of an extracurricular activity. However, both work hard for that to the point they barely sleep, don’t really have a social life, and are reliant on their guidance counselor to be some semblance of a friend. Which may not be a universal issue, but there is something very human about both sides to this.

For Lona, her mother is a single parent who works at a coffee shop and might just barely be making it. The idea of college is that it is part of the step of getting out of poverty and with the alumni a school like Harvard has, and just the power of its name, not making it seems like the end. Then, in Bennett’s case, yes Julia is a state senator, lawyer, and they are well off, but she isn’t the type of mom who is going to let him rest on her accomplishment. She came from nothing and expects him to support himself. Add on he is adopted and you see this pressure to succeed which makes it surprising neither of these kids have a mental breakdown.

Antonia Gentry as Jasmine and Ariana Guerra as Dana.

For, as noted, they can’t vote or drink yet at 16, 17 years of age, their life trajectories are on the line based off a handful of tests and the decisions of an admissions person. And mind you, the film doesn’t just talk about going to college and being prepared to do so, but also what it is like at underfunded or schools which have underprivileged students.

Which is what Jasmine and her debate partner Dana note. For with them coming from a school in which their debate advisor has to work two jobs, it’s clear they come from a completely different world than Lona and Bennett. They note they can’t really even afford to debate because that means fewer hours to support their family and yet, there they are for, more than likely, they recognize having debate on their college applications may mean better lives for them too. But, speaking for their peers, how is college even going to be a possibility if they can’t get through high school? Not to imply they bring up the school to prison pipeline or make their school seem anything beyond underfunded, but you have to appreciate showing multiple sides to the same issue.

It’s through Kathy that you begin to start feeling bad for Lona and Bennett. While their parents, until towards the end, seem largely like caricatures, Lona and Bennett just seem like one note, college or bust kids. But with Kathy, they open up and become vulnerable. Less sure of themselves and don’t appear to be know it alls. They are just kids who got put on a path, told to do this, this, and this, and then everything would be alright. And, in the nicest way, Kathy lets them know sometimes that doesn’t happen and, in a way, as much as she is speaking to the characters, depending on where you are in life, you may feel she is speaking to you too.

That is the type of connection Hunt builds. One which can easily transcend the actor she is sharing a scene with and end up directly speaking with you. One of the driving forces to watch this movie was Sami Gayle. Though she doesn’t do movies that often, her last one was in 2014, between her role in Detachment [note]Which I definitely recommend – Just for her part, not the movie as a whole.[/note]and in Hateship/ Loveship, there is this undeniable presence about her. Something which Latimore has as well, through his boyish charm, and together, so begins the clock of you waiting for them to be together. Because their arguments are far too passionate to purely be hate and when it finally happens, you’ll be as giddy as someone who waited through three movies for their two favorite characters to finally kiss.

Arguably, Antonia Gentry as Jasmine might find this movie to be, perhaps, a breakout role. I say that because, unlike most of the kids in debate, she stands out. Not just because she is speaking from the heart vs. rapid-fire facts. More so because there is something about her you want to see more of and invest in. Making it where, when you see her appear later in the movie, to challenge Lona and Bennett again, it’ll be hard to not get excited for you thought she’d never be seen again.

The basis of Julia’s story, a single Black woman overly invested in her son, is very familiar. In urban dramas, pretty much that is a noticeable portion of their foundations. However, Julia is very different. For one, she has notable success as a lawyer and eventually a senator. Plus, she adopted Bennett. Which may sound like a minor thing, but as she notes she came from nothing and the scholarships she supports, it helps you understand her drive.

She doesn’t know how much these scholarships and work may actually help someone, but for this little Black boy, she can make sure, with all her efforts and attention, he’ll be great. Making it when she fails or accidentally messes up, it becomes a bit of a reason to tear up a little. For you really get that full sense of a mother trying her best but having no real guide to help her. And it isn’t just the major things either. Her just wanting to bake cookies he likes is something which is a bit touching. After all, what could be better than not just being appreciated for your money and privilege, but for who you are and the effort you put in?

Is This Actually How Debates Are Done?

Sometime in high school, I went to one Saturday debate and maybe it was just that one competition, and their style, but what was seen then didn’t match this movie at all. In this movie, the subtitles honestly just end up noting people talking rapidly as if nothing they say really matters. But another thing which I found quite puzzling is how, even in different competitions organized, it seemed either a similar or the same topic was used.

Something I get, to a point, because the film wants to really push its message but it also makes you wonder why not just make a theme and work around it? Do you need to go to college, the value of non-STEM degrees and etc? For with the rapid fire and the topic seemingly never changing, it doesn’t make the idea of joining a debate team interesting, never mind viewing one. Which, considering how impressionable it is said people are, makes this film just using debate as a plot device quite unfortunate. A part of me feels odd about noting this as positive, and yet I can’t think of anything negative really to say. Is this going to win any awards for acting or writing? No. However, it is a film which presents an interesting message through its characters and what you can hear and understand in their debates. The chemistry of its leads are strong and while their parents aren’t going to set precedents in any capacity, at the very least, in terms of Julia, she presents a different take to an old story. Arguably, even expanding beyond that old story and painting one with notable complications due to her past and the fact she adopted a child. Also, lest we forget, it presents to us an actress, who sadly doesn’t seem to have anything to follow this. Which is a highlight for most films barely seem to invest in supporting actors unless they are already fully established.

Leading to why the positive label: To be honest, because of the trailer I entered in with low expectations. Yet, thanks to the leads, a poignant message used for the film’s story, the character of Kathy and Jasmine, as well as Julia, I found myself more than satisfied and happy I watched this. To the point now my admiration for Gayle has been revived, Gentry I want to see more of, and when it comes to Latimore? I feel more and more, with his names attached, even if there are some reasons to worry, there is a valid reason to assume quality.