The Short History of The Long Road – Summary, Review (with Spoilers)

Sabrina Carpenter proves herself to be more than a name to get financing but a performer worth the ticket price.

17-year-old Nola has lived off the grid with her dad, Clint, her entire life. However, not off the grid in the way we’re used to, meaning living in the woods or in hiding, but simply a van. However, lack of stability, friends, someone to talk to on a regular basis outside of her dad is starting to get to Nola. So when her dad is no longer in the picture, she ventures towards normalcy. But for a person whose life is anything but normal, can the dream that was deferred be something they truly love after living life on the open road?

While Carpenter’s career doesn’t begin and end with Disney, she hasn’t had a starring role outside the Disney machine. Which, of course, leads to the question of does she have the ability to take on something serious and flourish? Well, for those who saw Carpenter as Maya in Girl Meets World, you can see she has honed her craft since then and is more than deserving of being a lead actress.

For one, as seen in Girl Meets World, she has a potentially all-consuming presence. One which draws you in quickly and gets you emotionally invested in whatever capacity you are meant to be. Whether it is seeing her as your daughter, a sister, friend, or just someone to admire the bravery of. But what especially makes her a grand lead is her ability to share a moment. Be it with Clint, Cheryl, Blue, or especially Miguel, there is chemistry.

Something that, for a long of young actors, chemistry is hard to pull off outside of someone being their love interest. So for Carpenter to smile and through Nola you see how that person brings hope, a sense of acceptance, and rather than getting a sense of Nola chipping away at them, you see them melt in her hands. Yet, rather than make them into putty to play with, we see Carpenter step back and allow herself challenged, hold back from the easy reaction and not dominate a scene.

Thus giving us both the reason why she likely has been a Disney starlet and showing that, as an actress, she knows that even if a movie is greenlit because of her, the end product is a team effort. 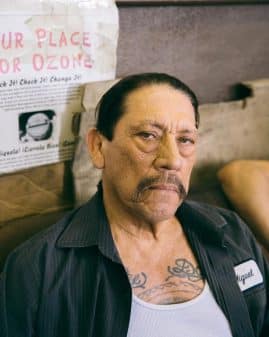 Similar to Carpenter, Trejo may have came into this film with limited expectations. After all, his persona has been rooted in either playing a tough guy or using that perception to craft jokes. However, as Miguel, you see a different side to Trejo. He isn’t playing an action hero, crime lord, or anything like that, he is a mechanic from Mexico who opened up an auto shop.

Which may not sound like something noteworthy but the way Trejo plays Miguel leads you to think, like many an actor who has his background, his talents are underutilized. Mind you, this isn’t to push the idea he presents moments which will have you in tears. However, while many a supporting character you can almost take or leave, Trejo’s role is made essential to Nola’s development.

Reason being, Miguel is the first one to show her the kind of life she could have had if her father was more stable. Also, after her father is no longer in her life, she is the first person she really gets to know and Trejo presents a softer side, without seeming like a sappy character. For whether it is learning about him being an immigrant, or how he treats Nola, it reminds you the American Dream isn’t a singular effort. To really achieve that idea anything is possible, you need a community and not a sponsor in a legal way, but someone who often is a stranger, willing to bet and invest in you. Even if only the kindness of their heart, or faith, pushes them to do so.

No matter who talks about Clint, he sounds virtuous. Maybe not the best with money, but he doesn’t steal, threaten, or get into fights. So with him gone and you seeing Nola steal to survive, or try to anyway, it leads you to wonder where is that coming from? Mind you, even before her father’s exit, she takes from people, and while a teenager, there comes this underlying question of why? Is it for the thrill since she has no access to friends her age, the internet, or TV? Perhaps she thinks Clint’s way is too time-consuming?

No, because if that were true, she wouldn’t work for Miguel during the film. So where does her willingness to steal food, a credit card, and other items come from, despite her working for Miguel for repairs to her van, is a bit of a mystery? At least for me.

Alongside Trejo, Carpenter reminds you of the importance and power of indie films. It is within them actors get to break trends in their careers, expand people’s perceptions, and remind you they are more than the characters they have played or the one you love. At the end of the day, they are actors, and that means they have more flexibility than often given credit for or they are allowed to portray publicly.

Leading to why the Positive label: Carpenter gives the kind of performance which doesn’t feel like that adult transition made to shock you into discarding how you once saw her. It is natural enough to seem like the persona you may have crafted in your head mixed with a full-on acknowledgment that her career with Disney is not the sum of her person. Same goes with Trejo, though Spy Kids and action films are the heart of his resume, what we see in Short History of The Long Road exemplifies that he is not necessarily an actor who wants you or himself to get comfortable. So one can only hope, for both, not only will the film open the eyes of casting agents but viewers with a curiosity about those two.

Why the Positive label: Carpenter gives the kind of performance which doesn’t feel like that adult transition made to shock you into discarding how you once saw her. It is natural enough to seem like the persona you may have crafted in your head mixed with a full-on acknowledgment that her career with Disney is not the sum of her person. Same goes with Trejo, though Spy Kids and action films are the heart of his resume, what we see in Short History of The Long Road exemplifies that he is not necessarily an actor who wants you or himself to get comfortable. So one can only hope, for both, not only will the film open the eyes of casting agents but viewers with a curiosity about those two.